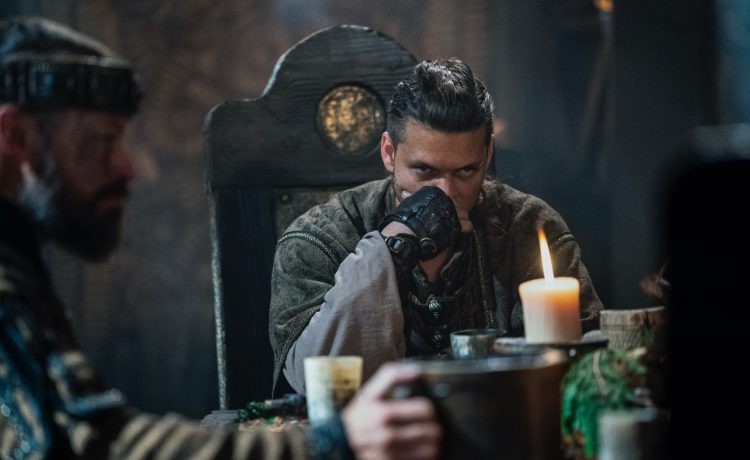 All throughout the series the Vikings’ thirst for war and conquest is cloaked in the language of fate, destiny, glory, and the Gods. In a telling sequence half-way through the final ten episodes, these justifications are stripped away to reveal the dark, very mortal truth that lies behind them. Ivar, Hvitserk, and King Harald reunite in a calm and peaceful Kattegat. All three are burnt-out, frazzled, and dissatisfied. There’s a real sense that “the age of the Vikings is gone” and that this is “the twilight of the Gods”. Harald and Ivar admit that there is no pleasure in being a King, despite it being a title both men have dreamed of and longed for, and for which they’ve lied, cheated, betrayed, and killed. In the final analysis, we can see – and finally they can see, however indirectly – that the great cycle in which the Vikings are trapped has been perpetuated not by the Gods – those great scapegoats in the sky – but by bored and angry men seeking in bloodshed distractions from a cold and brutish world whose quotient of misery has only ever been increased by their actions. It is especially sad to see Ivar churned back into this mill given the growth he experienced throughout this season, not only in being a caring, surrogate father to the Rus heir Igor, but in becoming an actual father after his body asserted itself just long enough to plant his seed in Princess Katia’s belly.

Ivar witnesses two men in a public gathering-place squabbling over a trivial matter, and extrapolates from this that war is a necessary state for the Vikings, because in peace they fight amongst themselves. It’s patently obvious that the lesson Ivar pulls from this incident says more about his pain and psychopathology – his hatred, his emptiness – than it does about society at large. Ultimately, it is he, and Harald, and Hvitserk, and a million other men just like them, who need war. They need external conflict to distract them from their own internal conflicts and inadequacies. Never-the-less, and perhaps unsurprisingly, Ivar’s facile supposition is all that King Harald needs to hear. Before long, the three men and a ready-made army are heading back across the sea to England for a final confrontation with King Alfred and his Christian Saxon soldiers.

“The Twilight of the Gods”

This climactic confrontation is, on one level, less a battle between two armies and more the continuation of the chess game Ivar and Alfred once played as children, as their fathers – King Ragnar and King Ecbert – cut deals and hatched plots in another room.

In many ways, Ivar was always marked for monsterhood. He grew up with the fierce love of his mother, Aslaug, which she wrapped around him like a blanket made of steel. By over-compensating for his condition and physical fragility to such a suffocating degree, she left him isolated, conceited and angry. His father, Ragnar, was absent for most of his youth. Though Ivar had Floki to teach and guide him in the ways of the Gods, Ivar didn’t realize quite how much of himself had been missing until Ragnar returned and took him under his wing. Ragnar was one of the few men who seemed to have faith in Ivar’s abilities; who told him that he could be something other than a liability, a cripple, a joke. They journeyed to England together with conquest in mind, but when a storm sank most of their boats, Ragnar swiftly refocused the purpose of their visit, enlisting Ivar’s aid to kill the surviving members of their party (to remove all evidence of their initial intent) and surrender themselves to King Ecbert.

Ragnar tells Ecbert to deliver him into the hands of King Aelle, so that Ecbert will not be blamed for Ragnar’s death, and the full fury of the Vikings will be directed at their mutual enemy instead. However, Ragnar has instructed Ivar to return home with news of Ecbert’s duplicity, so that both Kings will become the targets of the rage-and-grief-filled Viking horde. Ivar is the perfect capsule for this incendiary message, as Ragnar gambles, quite correctly, that King Ecbert’s sense of fair play, filtered through his Christianity, won’t permit him to harm or imprison a poor, harmless crippled boy. Ragnar thus succeeds in turning the Saxon’s Christian compassion into a fatal weakness, while at the same time teaching his weaponized son that love, violence, deceit, and death are so intimately connected as to be almost indivisible.