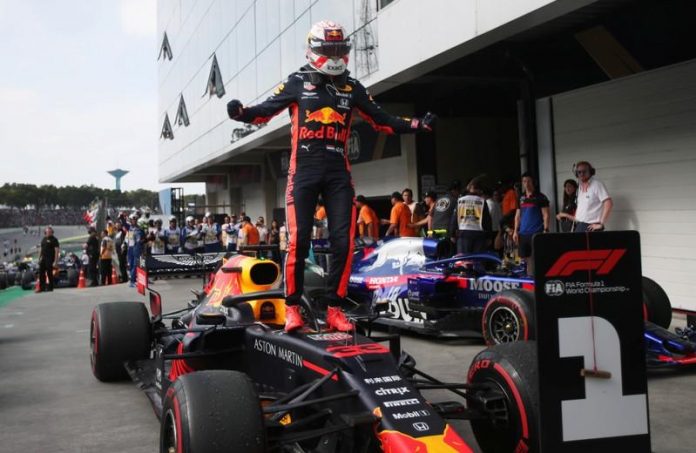 In a race that kept the safety car busy, Ferrari’s Sebastian Vettel and Charles Leclerc collided and retired in the closing laps.

Six times world champion Lewis Hamilton, who secured his sixth title in Texas two weeks ago, finished a close third but was demoted for tangling with Red Bull rookie Alex Albon in a frantic finale.

His five second penalty lifted Carlos Sainz to the podium in what would be McLaren’s first top three placing since 2014 — although the Spaniard was also under investigation for a possible racing infringement.

Without the collision, Albon might have been celebrating a first podium and Red Bull a one-two.

“I massively apologize to Albon,” said Hamilton, who admitted he was at fault in a post-race interview.

Verstappen started from pole position but had to twice overtake Hamilton, and avoid a near pitlane collision with Williams’ Robert Kubica, before celebrating his eighth win and third of the season.

His first win from pole also made amends for last year’s race at Interlagos where the Dutch youngster had been heading for victory before a coming together with French backmarker Esteban Ocon.

“The way we fought for it was even better,” replied the 22-year-old.

Victory also lifted Verstappen to third place overall in the drivers’ championship and best of the rest behind the Mercedes pair.

Leclerc had started the day third, 14 points ahead of Verstappen, but a late duel with Vettel ended in dejection after contact left both drivers on the sidelines with shredded tyres and suspension damage.

Drug testing to resume in China after coronavirus outbreak