Venomous lionfish are threatening native marine life in the Mediterranean 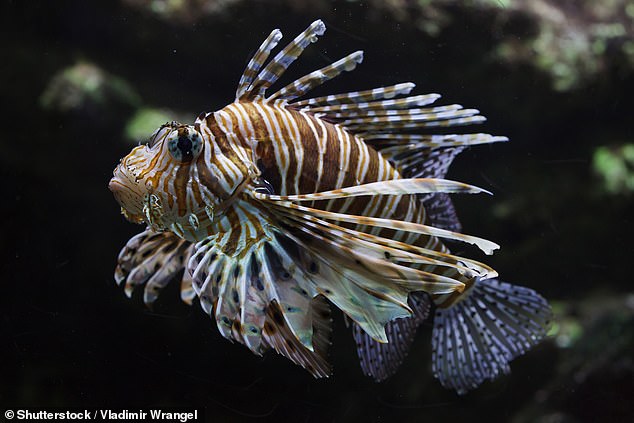 ‘Most damaging invasive fish species known to science’: Venomous lionfish are thriving on the Southern European coast and threatening native marine life in the Mediterranean

Venomous lionfish — the ‘most damaging invasive fish species’ — are thriving off of the south of Europe and threatening native marine life in the Mediterranean.

The species — first seen off of the Island of Cyprus eight years ago — has poisonous spiky fin rays and bold banded warning colours in red, white, cream or black.

However, experts found four-year-old lionfish in the Mediterranean measuring up to 14.5 inches (37 cm) in length — larger than those in their native Indian Ocean.

The ‘alarming’ discovery, made by a joint British-Cypriot team, is feeding fears that the species has become a permanent feature of Mediterranean marine life.

READ  Asteroid bigger than the Statue of Liberty whizzed by this week, scientists 'barely noticed in time'

The researchers have even suggested targeting the Suez canal and developing a dedicated lionfish industry to help mitigate the invaders’ damage.

‘The recent rapid spread of lionfish in the Mediterranean is a serious concern for the balance of marine life in the region as this is the most damaging invasive fish species known to science,’ said paper author Jason Hall-Spencer of Plymouth University.

‘This study really does emphasise the need for bio-security measures in the Suez canal — which is like a cut artery, with marine invasive species pouring through.’

Lionfish became notorious as an invasive species after they successfully infiltrated the western Atlantic Ocean.

After first appearing off of the Cypriot coast in 2012, researchers now fear that a similarly vigorous invasion of lionfish may be well underway in the Mediterranean.

The team examined some of the Mediterranean’s invaders, finding individuals that ranged from half a year to four years old and were 3–14 inches in length.

Both these age and lengths suggest that the fish have successfully established themselves around the island. 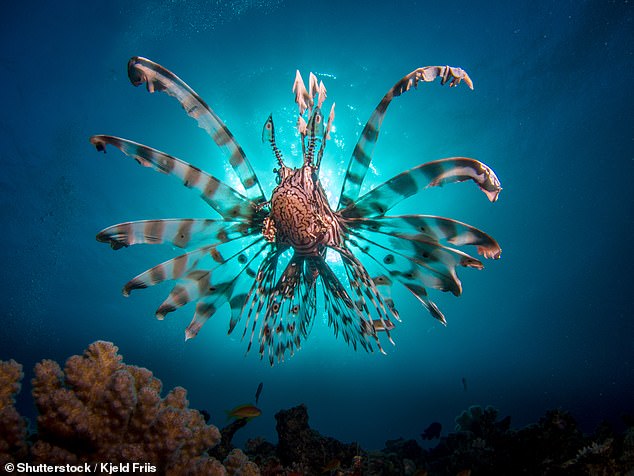 The species — first seen off of the Island of Cyprus eight years ago — has poisonous spiky fin rays and bold banded warning colours in red, white, cream or black

The scientists were also alarmed by the finding that female lionfish generally outnumber their male counterparts — with individual males able to mate with several females, potentially helping to trigger population booms.

‘Among the numerous threats to our marine ecosystems, biological pollution is less apparent to the human perception, said paper author and marine biologist Savva Ioannis of the University of Cyprus.

‘But in reality, it’s potent enough to disrupt the ecological balance.’

‘Although not all alien species successfully establish in or harm their new environment, some acclimatise relatively easy, exhibit rapid spread and exert catastrophic impacts on local marine communities.’

‘That has been the case with lionfish populations in the western Atlantic Ocean and now the story is repeating itself in the Mediterranean Sea.’

The full findings of the study were published in the Journal of Fish Biology.