Thirty-seven Americans have died from severe lung illnesses linked to e-cigarettes, new figures from the Centers for Disease Control and Prevention (CDC) reveal.

According to the report, released on Thursday, 1,888 people have developed EVALI (e-cigarette or vaping product use-associated lung illness) in every state but Alaska.

Most of the victims are male and under the age of 35, with ages of those who died ranging from 17 to 75.

There have been three deaths each confirmed in California, Georgia, Indiana and Minnesota and two deaths each in Illinois, Kansas, Oregon and Tennessee.

Officials from the CDC, US Food and Drug Administration and state health departments are still racing to identify what exactly about e-cigarettes is making people deathly ill but, as most victims have reported using THC vapes, experts have warned against using these products. 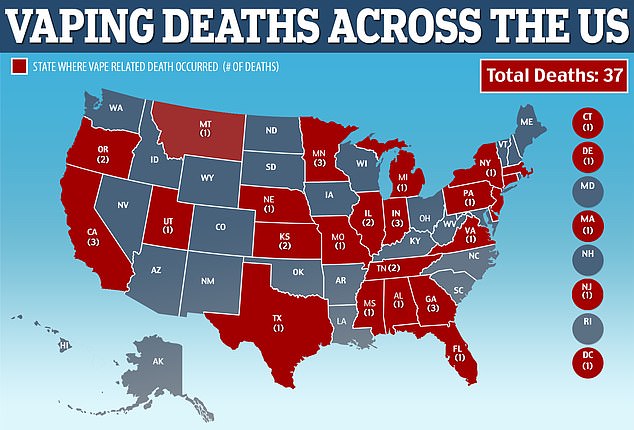 Health officials have homed their investigation in on products that contain THC, the main psychoactive component in marijuana.

About 86 percent of people who’ve fallen ill have reported using THC pods, but experts say they cannot yet rule out nicotine as a cause of the spate of illnesses.

Of those who’ve fallen ill, 11 percent have reported exclusive use of nicotine-containing products.

Officials add that teens and young people make up the majority of illnesses because flavored e-cigarettes were marketed towards them.

Massachusetts outdid them all and has enacted a ban all vaping products, flavored or non-flavored.

Many of these bans are facing legal challenges from vape shop owners who say the bans will ruin their businesses.

On the federal level, President Trump said his administration wanted to pull flavored e-cigarettes from the market nationwide.

But then the President seemed to curb his previous statement, instead tweeting that counterfeits need to be removed from the market.

Counterfeit or bootleg e-cigarettes that officials believe have been adulterated to contain THC have become the prime suspects in the search for the culprit of this year’s vaping illness epidemic.

Recent analysis of the lung tissue of people with EVALI suggested that toxic chemicals released when e-liquids are heated may be damaging lungs.

Others have theorized that oils, including the glycerin base used in many vaping products or vitamin E acetate may be triggering inflammation and injury.

In the meantime, officials say that people using nicotine e-cigarettes as quit aids should not go back to smoking combustible cigarette, but are particularly warning young people and pregnant women against vaping.

Men who are 'couch potatoes' are more likely to want to be muscular and hit the gym, study shows

Coronavirus: Wuhan residents told to stay inside and be vigilant 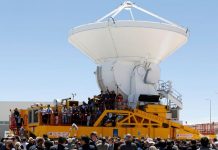 Chilean telescopes that explore galaxies brought down to earth by coronavirus

Paintings discovered inside the coffin of a 3,000-year-old Egyptian mummy

US navy fires commander who raised alarm about coronavirus on ship

Microbe, Italian flag and medical mask emojis see a spike in use during the coronavirus pandemic 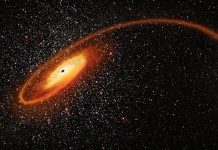 Gardening 'holds the key to lifting spirits during the coronavirus crisis'