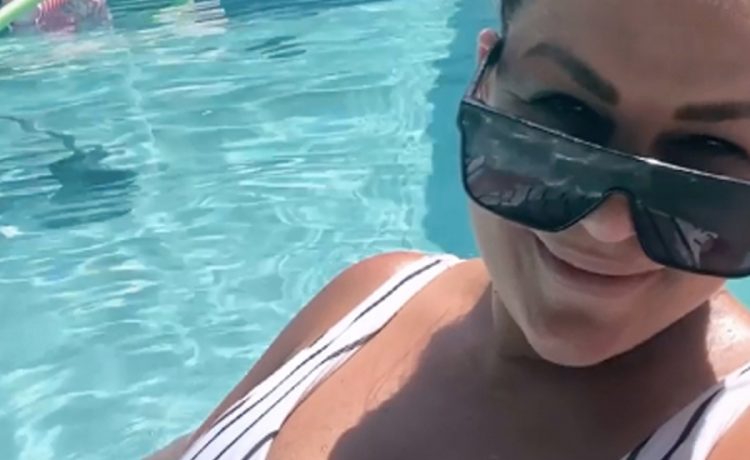 PREGNANT Vanderpump Rules alum Brittany Cartwright showed off her ready-to-pop baby bump as she swam with her mom just days before giving birth.

The former Bravo star kept cool over the sunny Los Angeles weekend in the backyard pool of her $1.9million home she shares with husband Jax Taylor.

Brittany, 32, showed off her growing belly in a white, navy-striped swimsuit.

“Nothing like the pool to help take some pressure off,” she captioned the photo as she rested her hand on her stomach.

A variety of pink and blue pool toys can be seen in the background of the sunglass selfie she took in the water.

In another sweet snap, the reality star posed next to her mom, Sherri, who was visiting from out-of-town.

“My Momma is in town!! She’s had such a rough year and made it through it all and now she will get to be here for the birth of my son!

“It means the world to us she is here!! So close,” she wrote of her due date.

READ  What to Blow Your Gift Cards on at Walmart

The mother-daughter duo enjoyed their spacious backyard and in-ground swimming pool in her 3,700-square-foot home that’s equipped with five bedrooms and 5.75 baths.

While her husband, Jax, 41, did not appear in the photos, he has supported his wife throughout her pregnancy.

Last week, the controversial TV figure slammed the “pathetic” trolls who have been “bullying” his pregnant wife.

He took to social media to lash out at the trolls who have been taunting the mom-to-be about her weight gain during pregnancy.

The ex VPR star reposted a screen grab of a tweet he wrote, which said: “I’ll never understand the thought process of going to a persons social media who you don’t know and verbally assaulting them.

“Like how much time do you have in your pathetic life. You look like a sad insecure soul. Jesus build people up right now don’t we have enough shit to read.”

Jax honed in his point by writing under the screen grab: “I’ll never understand people who project insecurities they have onto others.”

He then followed up with a second tweet to say that after seeing what Brittany has been through, will “never be that person” who “lashes out on people” on social media again.

“I will never understand people who bully and harass on social media, especially when it comes to a pregnant woman,” Jax added.

“I don’t know who needs to hear this, just take a minute before you write a hateful text. Why are you doing it? What are you gaining from it?

“Bring people up not down, we have enough hate in this world. Have a great day.”

Life turned into a s**tstorm after my split from Jesy Nelson, says Chris Hughes

It comes after Brittany was forced to clap back against trolls, telling them to “rot in hell”, referencing an infamous scene from the Bravo reality series.

In addition to her criticisms, Jax has been struggling with problems of his own – as The Sun uncovered he has amounted over $1.2million in unpaid taxes.

News of the TV personality’s financial woes comes after he purchased a $2M Los Angeles mansion with wife Brittany just before he was fired by Bravo for a history of problematic behavior.