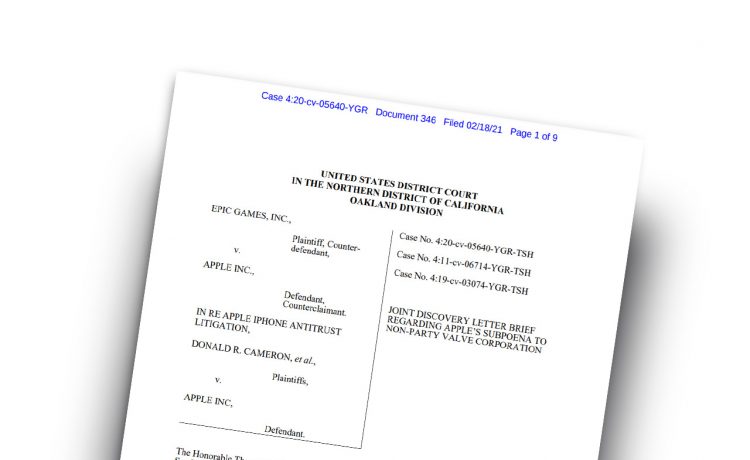 In an ongoing legal battle VS Epic, Apple’s requested that non-party Valve deliver a series of data points. Apple’s suggestion is that the biggest competitor to Epic’s “Epic Games Store” is Valve’s game store Steam. Apple’s lawyers suggest that their “request is very narrow”, while Valve’s lawyers suggest “Apple wrongly claims those requests are narrow. They are not.”

Per the document released this week, Valve’s council suggests that they’ve produced documents on revenue share, competition with Epic, Steam distribution contracts, “and other documents.” Valve suggested that Apple demanded that they “(i) recreate six years’ worth of PC game and item sales for hundreds of third party video games, then (ii) produce a massive amount of confidential information about these games and Valve’s revenues.”

Valve suggested that Apple sent a list of 436 games that appear in both the Epic Games Store and Steam. They then went on, wrote Valve, to demand that “Valve identify, from 2015 to the present, every version and all digital content or items for each of these games on Steam, then (b) provide exhaustive information about all of them, including [the following]”.

The list of requests on games included:
• Sale dates, prices and price changes from 2015 to the present.
• Gross revenue for each game, version, and item, “broken down individually.”
• “All of Valve’s revenues related to these versions, content and items.”

READ  Gaming the game: Popular video games can be vulnerable to hackers - CNBC

“Valve does not in the ordinary course of business keep the information Apple seeks for a simple reason: Valve doesn’t need it.” Valve also pointed to an earlier point in Apple’s battle with Epic in which Apple’s lawyers suggested that the market relevant to this case included “competing platforms on which Fortnite is distributed and monetized.” (Case No. 20-cv-05640-YGR) (Dkt. 118 at 16).

It’ll be interesting to see if Apple is able to compel the court to demand Valve provide the full scope of information outlined in documentation from the court this week. To see more information on this latest document filed this week, see Case 4:20-cv-05640-YGR Document 346 Filed 02/18/21 with the United States District Court in the Northern District of California, Oakland Division.