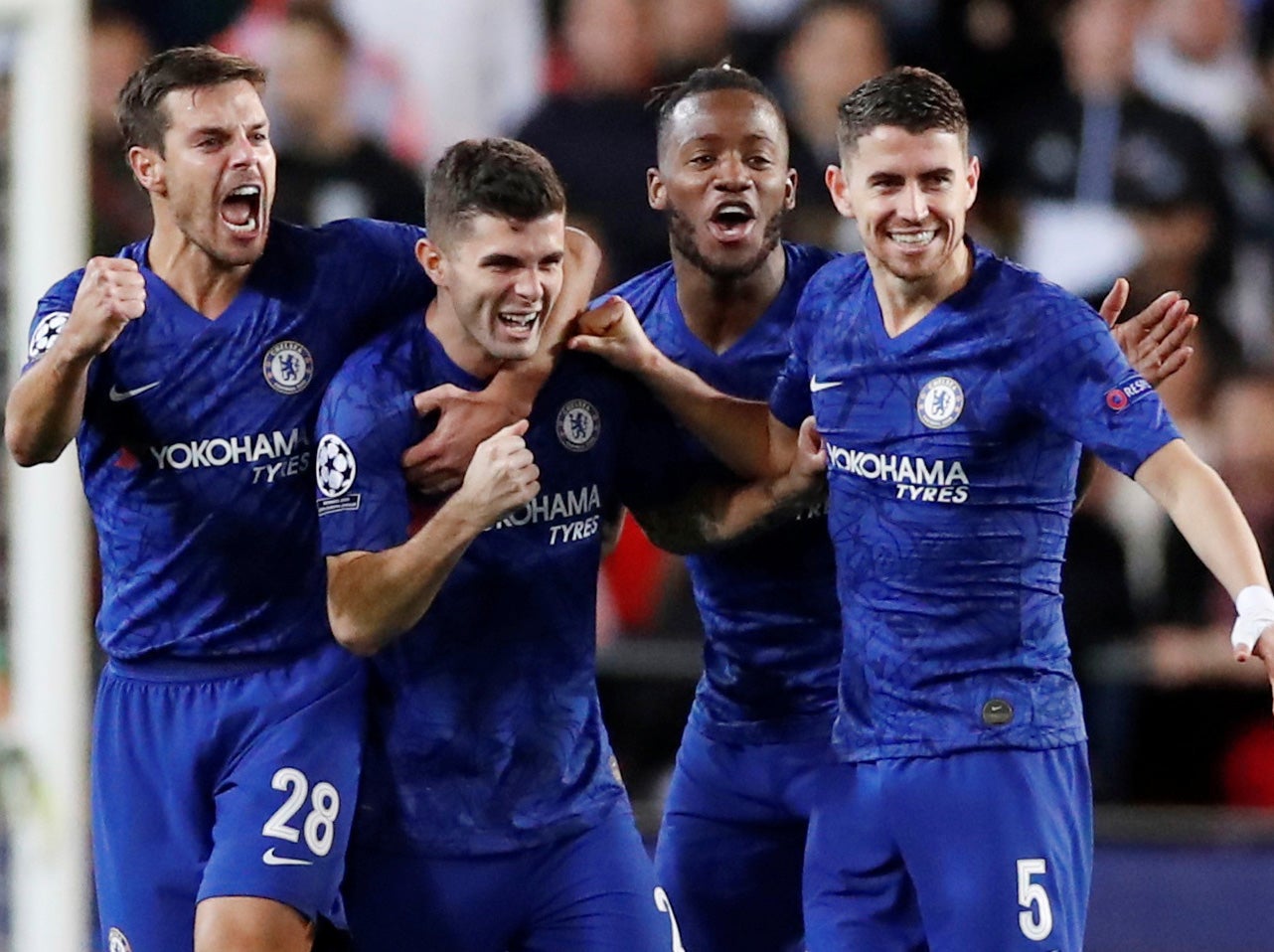 Chelsea head to the Mestalla locked in a three-way battle with Valencia and Ajax at the top of Group H and Frank Lampard knows a victory here would take a major step towards the knockout stage.

The Blues face group strugglers Lille in the final round at Stamford Bridge, and can put themselves in pole position with a positive result in Spain this evening.

Lampard described it as a ‘must not lose’ game as he looks to reach the last 16 in his first season in charge of Chelsea. Follow all the latest below:

75 mins: Chelsea persistent hunt for goals may end up hurting them in the end as Valencia continue to send balls into the box. A corner is whipped in by Parejo and headed back across goal where Kepa grabs hold of the ball to end the attack.

72 mins: Frustration for Valencia as the ball comes into the box for Rodrigo. He makes his run but so does Kepa who comes out of his goal and catches the ball.

Kante is booked for a tackle on Gaya despite winning the ball.

69 mins: Chance! Big chance for Chelsea. Batshuayi makes a run in behind the defence as the ball is played up to him. He runs it into the box and squares the ball to Willian who shoots but hits Cillessen.

A belated offside flag is raised against Batshuayi.

66 mins: Chelsea are under pressure here. Valencia are turning up the heat. Cross after cross comes into the box but Chelsea are able to defend.

A ball up the pitch is chested down by Maxi Gomez and Rodrigo hits it into row Z.

65 mins: SAVED! Kepa saves the penalty! Justice for Chelsea as the replays showed Gaya ran into Jorginho and not the other way around.

63 mins: Penalty to Valencia! Or is it? No one is quite sure. Jorginho is the punished party, and it is a penalty.

60 mins: Kante and Gabriel clash with the free kick being given to Valencia. Chelsea win the ball back and Kante gets free on the right side of the pitch. He puts a cross into the box and Pulisic catches the ball on the volley but can’t direct it at goal.

57 mins: Chance for Valencia! A long ball forward has Chelsea’s defence in tatters. Kepa comes off his line as Christensen blocks the ball into the path of Rodrigo. He chips the ball over the goalkeeper but doesn’t get the dip on the ball and he misses the open net.

54 mins: Azpilicueta goes in the book for a trailing arm that hits Costa in the face as he tries to get past the Chelsea defender.

52 mins: GOAL! It stands! VAR took a long time over the decision and they’ve ruled that Pulisic is onside, Chelsea have the lead!

51 mins: Hands on heads from the Chelsea players as Pulisic gets the ball into the back of the net but the offside flag goes up.

The cross comes into the box and the ball is headed into the six yard box where Pulisic taps it into the net. VAR will check it but this goal won’t stand.

48 mins: Parejo stays down as Kante clips his ankle. The amount of play acting from the home side tonight has been immeasurable. Valencia’s free kick amounts to nothing and Rodrigo returns the favour by tackling Reece James and giving Chelsea a free kick of their own.

James puts it into the box but Valencia defend the cross.

Second half: Tammy Abraham is subbed off at halftime. He had to be stretchered into the changing room after the half time whistle went. Michy Batshuayi replaces him as the second half gets underway.


After the conclusion of this game Liverpool will be hosting Napoli at Anfield as they search for qualification to the knockout stages as well.

Jurgen Klopp has named his team and you can find the full starting XI here:


Tammy Abraham looks in a bad way and doesn’t look likely to play anymore part in the game.

Valencia had three really great chances in the first 45 minutes but only managed to score with one of them.

Chelsea responded with two minutes with Kovacic scoring his first ever goal for the club.

45+2 mins: Two added minutes were played before the break with Chelsea searching intently for a second goal. Willian takes a corner that Abraham went for and got a glancing header on the ball before landing awkwardly.

He gets a rubbing down by the physios and limps off the pitch clutching his side as he goes in for the break.

44 mins: It should be two! Pulisic runs at the central defence and Valencia drop off him. Kovacic sneaks into the box on the left hand side and Pulisic finds him with a pass. Koavcic hits the ball at goal but Cillesson saves the shot!

41 mins: GOAL! Kovacic scores his first ever goal for Chelsea! The visitors are level as well.

The ball comes into the box and is headed around a bit before coming to Kovacic. He brings he ball down and shoots as he turns towards goal. He finds the gap in the defence and puts the ball into the bottom corner.

It’s been 121 games in the making but Kovacic has his first goal for Chelsea.

40 mins: GOAL! A long ball forward from Cillesson opens up space on the right hand side. Rodrigo takes the ball there and puts it onto his left foot. He crosses the ball into the middle of the box and Soler runs onto it. He scuffs his shot into the ground and Kepa gets a good touch on the ball but it trickles over the line.

39 mins: Save by Cillesson! James puts yet another great ball into the box. It’s headed on to Abraham who hits a curling shot at the top corner but Cillesson reacts sharply to push the ball over the goal.

Can I live stream it?

The match will be available to stream via the BT Sport app. You can also watch it on BT Sport 3 which will be broadcasting coverage.​

Chelsea vs Valencia kicks off at 5.55pm on Wednesday 27 November at the Mestalla Stadium.