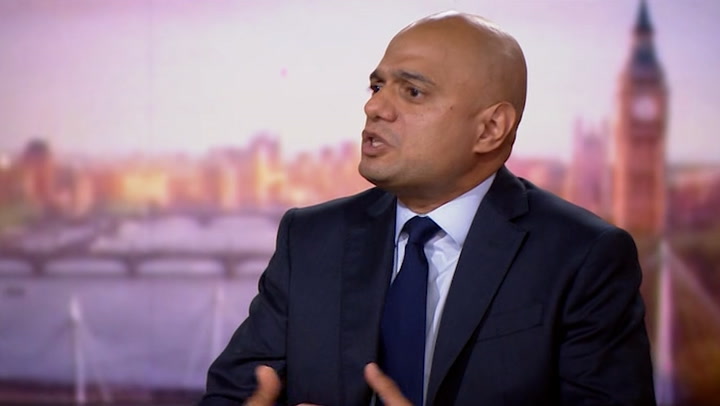 Sajid Javid says vaccine passports ‘will not be going ahead’

Health Secretary Sajid Javid confirms vaccine passports for large events will not be going ahead in a dramatic u-turn.

The passports were expected to be rolled out at the end of this month in England.

Brits would have been required to show proof that they had both Covid jabs in order to get into crowded venues and large events including nightclubs.

But in a U-turn on Sunday, following a backlash from Tory MPs, the Health Secretary said the idea had been scrapped.

Mr Javid told the BBC: “We shouldn’t be doing things for the sake of it”, before adding: “I’m pleased to say we will not be going ahead with plans.”

Sajid Javid has confirmed vaccine passports have been scrapped
(

An hour earlier he told Trevor Philips: “I’m not here today to rule it out, we haven’t made a final decision.”

“There has never been any clarity from ministers about what vaccine passports were supposed to achieve, how they would work and what was expected from businesses and workers.

“Days ago, the vaccine minister stood before Parliament to confirm the introduction of Covid passports and stress their importance, now they’ve been scrapped.

“This is the culmination of a summer of chaos from ministers and they urgently need to get a grip before winter.”

Mr Zahawi said it “pains me” to implement something that “goes against the DNA” of the Prime Minister and himself.

Boris Johnson ditched his opposition to Covid passports in July when he served noticed to young people that they would have to be fully vaccinated to go clubbing from the end of September.

The Prime Minister had only stopped opposing vaccine passports in July
(

He said at the time: “I should serve notice now that by the end of September, when all over-18s will have had their chance to be double-jabbed, we are planning to make full vaccination the condition of entry to nightclubs and other venues where large crowds gather.”

And Mr Zahawi told MPs the plan was “designed to reduce transmission and serious illness” and the Government didn’t take it lightly.

“The Conservatives have needlessly sown confusion among businesses for months by threatening to introduce Covid passports, and will not be forgiven for it,” Mr Carmichael said

“After this inevitable U-turn, the Conservatives must now see sense and scrap the unnecessary and draconian Coronavirus Act altogether.”

The turnaround comes as the Prime Minister prepares to set out his plans to tackle coronavirus over winter.

The PM is said to be reluctant to impose another lockdown, so is focusing on increasing vaccination uptake.

Mr Johnson is expected to say that vaccines will continue to be the first line of defence over the autumn and winter, a high-risk time for coronavirus as other respiratory illnesses circulate.

And in a move away from locking down the country, a number of powers allowing the Government to shut down sections of the economy in England are set to be repealed.

The Prime Minister had faced backlash from his own party over the summer because of the “threat” of domestic vaccine passports.

Andrew Bridgen, one of 43 Conservative MPs to sign a declaration opposing vaccine passports, had hoped Parliament would be recalled from its summer recess if ministers are “serious” about asking people to show proof of their vaccine status to gain entry to domestic venues and events.

The Music Venue Trust welcomed the move saying: “Our issue with double vaccination certification as a sole requirement of entry was that it was highly unlikely to achieve improved safety above and beyond those measures already in place and highly likely to create a two tier night time economy which divided venues and customers.

“We await formal confirmation from the government of the scrapping of these problematic passports. Meanwhile we continue to encourage everyone in the live music community to please take a test before attending an event, a personal approach to risk mitigation that is highly effective and makes a real difference to the safety of gigs.”