US soprano Kathryn Lewek shames the critics who 'body-shamed' her 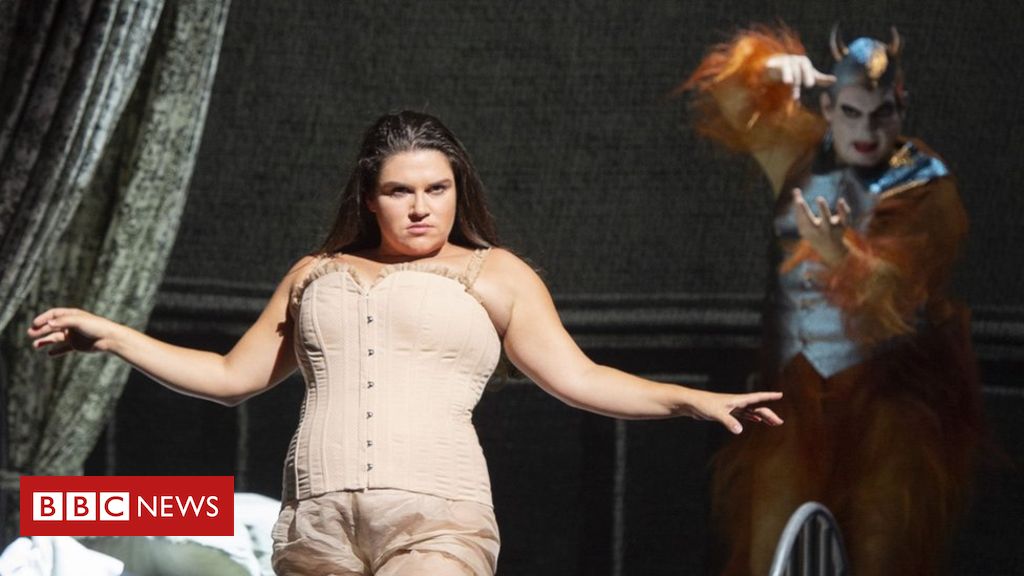 US soprano Kathryn Lewek has criticised the “lazy” and “hurtful” comments opera critics made about her latest role, accusing them of body shaming.

The singer was widely praised for her performance as Eurydice in a raunchy production of Orpheus in the Underworld at the Salzburg Festival in Austria.

But some reviewers went further and criticised her appearance, calling her “fat”, “stocky-looking” and “buxom”.

Speaking to the BBC, Lewek called the comments “antiquated” and “ridiculous”.

She said her role in Orpheus in the Underworld was clearly a sexualised one (“she has sex with everyone on stage”) so she had been prepared for “some comments”.

But the soprano, who recently gave birth, was stunned to read reviews that she said critiqued her “postpartum mom-bod instead of reviewing the show”.

One column in particular “really lit my fire”, she said. Written by Manuel Brug in German broadsheet Die Welt, it described Lewek and her fellow cast members as “fat women in tight corsets spreading their legs”.

Lewek said: “It was such a derogatory way of describing what my character was all about.”

Without naming Brug, she lashed out at “body-shaming and fat-shaming” on Twitter, writing: “Time’s up on these juvenile bullies.”

Brug later responded, writing: “If she is so sensitive why is she showing herself the whole time in this corset? It is interesting that the thin ladies on stage all had dresses and the not so thin ones have costumes where you see a lot of her weight.”

His comments sparked a furious backlash from other singers.

“This is absolutely disgraceful,” wrote British tenor Anthony Gregory. “Why is it ‘interesting’ that all the ‘thin ladies’ on stage had dresses? Was that a disappointment? So sorry you’re having to put up with it Kathryn.”

“Commenting on anything that is unrelated to the performance is irrelevant,” added Brit Award-winner Camilla Kerslake, noting that “male singers rarely have to put up with this”.

“This is [a] representation of how our society and the media have gone way off course in analyzing real beauty and art – and that’s devastating,” said violinist Emily Madonia.

Lewek subsequently wrote to the editor of Die Welt imploring the paper to “set higher standards of quality and decency for your employees”.

The BBC has also contacted the newspaper’s editor for a response.

Born and raised in Connecticut, Lewek has established herself as one of her generation’s strongest coloratura sopranos, performing with the The Metropolitan Opera, Opera Leipzig, English National Opera and as a soloist at the BBC Proms.

Although she has “gone up and down in weight over the course of my life”, the singer said the recent reviews were “the first time I have ever been a target” of comments about her size.

“At first I just wanted to ignore it all,” she said, but changed her mind when other performers, including Deborah Voigt and Jessica Pratt, contacted her to say they had faced similar criticisms.

“The outpouring of support, and people telling their stories to me made me realise this is something I need to talk about,” she said.

“I’m not ashamed of how I look, I’ve got a thick skin, and it felt like an opportunity for me to help my community – because it’s unacceptable. It’s not good journalism.”

The response has encouraged her to keep the campaign going, and she plans to speak at a summit of the Parent Artist Advocacy League in New York later this year.

Besides, she said, the Salzburg critics missed a vital point about her post-baby physique.

“I think I’m singing better than I’ve ever sung and, honestly, the extra weight I put on when I had my daughter has actually helped,” she said.