Under The Skin TV series rights lead to bidding war


Who would’ve thought one of the weirder and more obscure science fiction gems of the mid-2010s could become a competitive television property in 2020? But so it is for Under the Skin, an underrated thriller that starred Scarlett Johansson as an extraterrestrial going through an identity crisis.

The film was a passion project for writer-director Jonathan Glazer when he co-wrote and directed the film in 2013 as a follow-up to Birth. Debuting at the Telluride, Venice, and Toronto International Film Festivals, Under the Skin made a splash in 2013 for its eerie and uncomfortable mingling of sex and death with Johansson, newly a face in Disney’s Marvel Studios, playing a truly alien femme fatale who lures men to their skin-ripping deaths and leaves babies to drown on lonely coastlines as the tide washes in. Never an obvious mainstream concept, the film was picked up and distributed by indie tastemaker A24—but before its current brand recognition—and released in April 2014. Grossing less than $5.4 million total in its worldwide release, it’s a bit of a surprise that it could become such a hot commodity now.

That turn of fate is in large part credited to Silver Reel, one of the several original financiers on Under the Skin before A24 and the film festivals came along. (Other financiers included Film4, the BFI, and Creative Scotland). The firm apparently approached Seventh Kingdom Productions, the company that produced the film, with the idea of making an Under the Skin TV series in 2017. While Glazer and Under the Skin producer James Wilson were intrigued, they ultimately focused on their film projects—also in development at Seventh Kingdoms productions for which they are board of director members.

READ  Is Kill Bill Two Movies or One? Tarantino Has the Final Answer

Cut to 2019 and Seventh Kingdom is beginning the process of dividing its assets in what Deadline reports is the UK equivalent of filing for Chapter 11 bankruptcy in the United States. Suddenly, the television rights are up for grabs, which has drawn the attention of A24, who has built its brand recognition for tasteful and edgy “elevated” genre auteur pieces, and Under the Skin is one of the movies that helped carve out that reputation.

According to Deadline, Wilson, Glazer, and Seventh Kingdoms’ other directors have signed a one-page document saying the rights to adapt the movie as a TV series have not been sold or promised to any one party, hence the sudden bidding war, which is reported to not be “acrimonious and there is hope that all parties will emerge from the process with relationships intact.”

Under the Skin certainly has a potential for long-form expansion. Much of the mystique of the original film is how little is known about Johansson’s character, even her name. She is just “The Female” and her arc is often only intimated, as are the methods of her seduction and destruction of men (as well as her failed attempt to atone). It’s one of our favourite movies of the past decade and could lend itself well to the small screen. Given A24 also has a deal in place to produce original content for Apple TV+—and A24 is working with Glazer on his next movie—we wouldn’t be surprised to see this on streaming one day, albeit perhaps with the financier who lighted upon the idea. 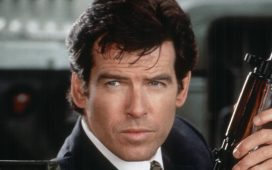