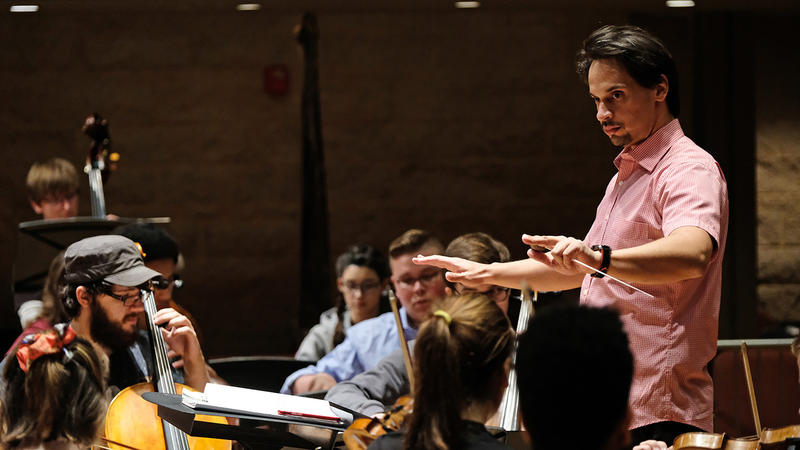 For about a year, Darwin Aquino has been serving as conductor of the orchestras at both the University of Missouri-St. Louis and Washington University. And on Tuesday evening, the two groups under his direction rehearsed together for the first time ever. Final preparations are underway for their distinctive concert this Sunday, where they’ll combine musical forces to present music from several popular video games, films and more.

“It’s the music that we hear every day, and especially our young people,” he said during Wednesday’s St. Louis on the Air. “They are hearing that music while they play the video games or they see a movie. So that’s why we decided for this very special event [to] put two university orchestras together … playing the music of today.”

From “World of Warcraft” and “Zelda” to “Harry Potter” and “Lord of the Rings,” Sunday’s program promises a wide range of beloved scores. There will also be visual highlights on a big screen accompanying each piece.

The free performance at the 560 Music Center is billed as a family-friendly affair highlighting the talents of more than 100 young musicians.

Host Sarah Fenske talked with Aquino about some of the highlights and why the Dominican-born conductor and composer is especially thrilled about this performance.

Listen to the conversation:

“St. Louis on the Air” brings you the stories of St. Louis and the people who live, work and create in our region. The show is hosted by Sarah Fenske and produced by Alex Heuer, Emily Woodbury, Evie Hemphill, Lara Hamdan and Joshua Phelps. The engineer is Aaron Doerr and production assistance is provided by Charlie McDonald.

Send questions and comments about this story to feedback@stlpublicradio.org.

READ  Not All Video Games Are Created Equal - Prince William Living
Share on FacebookShare on TwitterShare on PinterestShare on Reddit
newsgrooveFebruary 12, 2020