Who had Ulrika Jonsson making an OnlyFans account on their 2021 bingo card?

The Swedish-British TV presenter, 54, confessed she is ‘seriously considering’ signing up to the adult subscription service in an Instagram Q&A, surely to fans’ delight.

Responding to a follower who asked, ‘Only Fans?’ the model wrote: ‘Seriously considering it…’ followed by a side eye emoji.

The former weather presenter also admitted to not giving a toss about what her kids, Cameron, 26, Bo, 21, Martha, 15 and Malcolm, 12, think of her sultry snaps, saying: ‘I don’t give a f*** about them.

‘This is my life. I’ve dedicated my life to them.

‘Yes, there are probably times when they’re unhappy, but they don’t voice it anymore.

‘I have more years behind me than I have in front of me and I have shown more than my dedication to them and that will continue.

‘Sometimes, they go, “oh cringe.” But that’s the role of the parent to embarrass the children.’

The star is no stranger to baring all on social media, particularly in the name of good causes.

In summer she posed naked with a wheelbarrow in support of men’s mental health.

Stripping off for the Bare Yourself campaign, she reminded her followers: ‘It’s never unmanly to talk’ before nominating fellow celebs Ore Oduba and Saira Khan to also get their kit off in the name of charity.

The SAS: Who Dares Wins star recently told The Sun that she’s finally embracing her body after years of being ‘programmed’ to focus on its flaws.

‘I’m trying to find a way to love my body. It’s a bit wrinkly but that’s how it is,’ she said.

‘I was always told very bad, negative things about my body as I grew up and now I’m like, I’m 54 and I’m going to put my body out there and it is what it is.’ 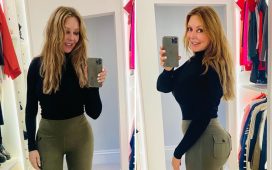