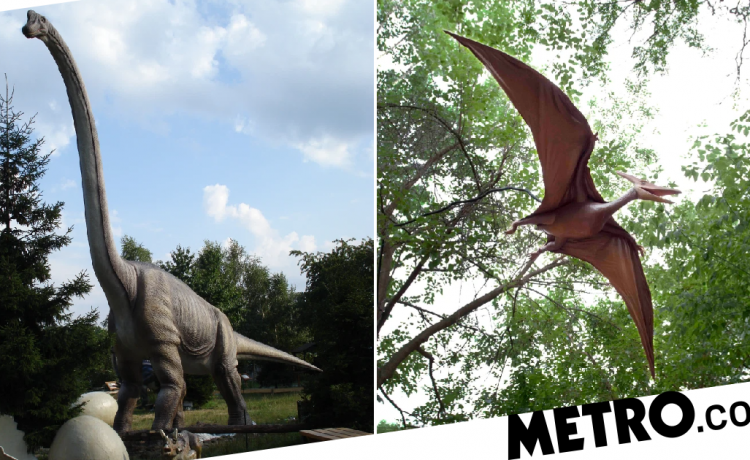 Family days out are back on the cards as restrictions ease.

So if you’re looking for something a little different, giant robotic dinosaurs could be coming to a park near you.

Jurassic Encounter is touring the UK this summer and autumn, bringing more than 50 animatronic dinosaurs to outdoor spaces in London, Birmingham, Glasgow and Leeds.

You’ll be able to see the 8m tall T-Rex that breathes and sways its tail, an Iguanodon fighting against a Deinonychus, Pterosaurs that screech as they soar through the trees, a 15m tall Brachiosaurus, guarding her eggs and a 16m long Diplodocus, who cries out to passers-by.

The tour begins at Grovelands Park in London every day from July 24 – August 10, before moving to Birmingham Botanical Gardens from August 21 until September 5, then onto Glasgow Cuningar Loop from October 2-17 and finishing at Leeds Roundhay Park from October 23 to November 7.

Naz Kabir, spokesperson for Jurassic Encounter, says: ‘Dinosaurs have always captured the imagination of children and adults alike, and Jurassic Encounter will be a fantastic, interactive way to learn more about these fascinating creatures.

‘We can’t wait to welcome our guests – and our Prehistoric visitors – to parks up and down the UK this year.’

A early-bird discount is available by entering the code EARLYBIRD20 at the checkout before the end of May.

After the event was announced on social media, parents were already getting excited.

One said: ‘The boys would love this!’

Another added: ‘Omg the kids would go nuts.’


MORE : Discover the UK’s most amazing self-catering holiday spots now that staycations are back

READ  Your kids will love Chester’s Ice Cream Farm and it’s perfect for the sunny Bank Holiday weekend
Share on FacebookShare on TwitterShare on PinterestShare on Reddit
newsgrooveMay 11, 2021