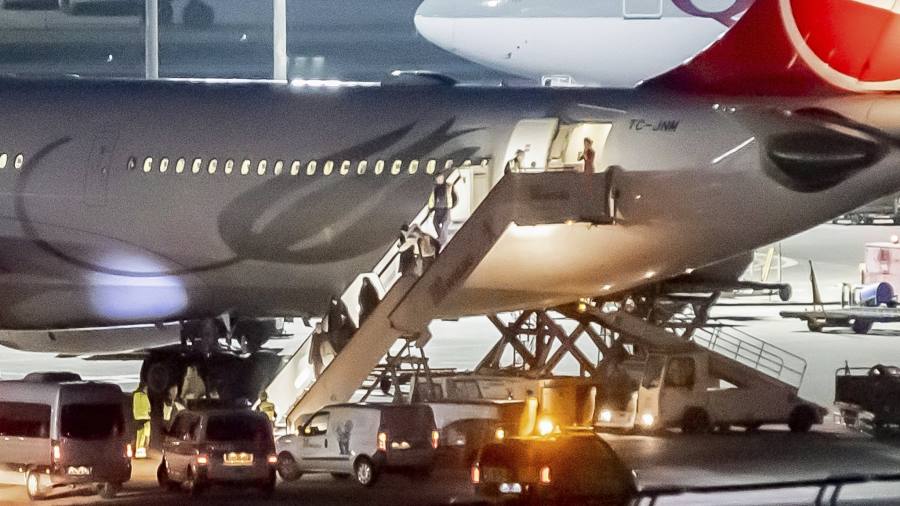 British jihadis returning home from Syria and Iraq will have their movements restricted and be enrolled in mandatory deradicalisation programmes if they cannot be prosecuted for terrorism offences, say Whitehall officials.

Arrangements by police and security services to manage Isis fighters are under new scrutiny since Turkey this week announced it would begin repatriating foreign terror suspects to their countries of origin. The first British national arrived at Heathrow on Thursday.

Minimising the threat posed by the returnees will not be easy. The UK, along with European allies including France, Sweden and the Netherlands, is now set on a steep learning curve in resettling potentially dangerous extremists, some of whom may have been repatriated against their will.

Of the 900 Britons estimated to have travelled to fight with Isis, around 40 per cent have already returned, 20 per cent are thought to have died and the remainder, around 360, are still in the Middle East.

Security officials say they are confident they will be able to identify any fighters attempting to re-enter the country, even if they come without the assistance of a country such as Turkey. Alongside the fighters themselves are an unknown number of spouses and children who are likely to have been traumatised by their experiences in the so-called Caliphate.

Alex Younger, head of MI6, warned earlier this year that they were “likely to have acquired the skills and connections that make them potentially very dangerous”.

The government has made clear it will try to prosecute all repatriated fighters, but it is notoriously difficult to find evidence of terrorist acts committed in unstable conflict zones.

Keeping track of the fighters once they are in the country will also be a challenge. Security services are stretched and MI5 is in the process of taking on responsibility for radical rightwing extremists as well as Islamist terror. Because surveillance is expensive, it would only be possible for the highest-risk returnees, and it is likely that most will have to be managed in the community by police and council officials.

On arrival in the UK, all returnees will be detained at the airport under Schedule 7 of the Terrorism Act. Under these powers, the police can question individuals for several hours and confiscate items such as digital devices for investigation.

If there is not enough evidence for the suspected fighters to be charged immediately, they can be managed under Terrorism Prevention and Investigation Measures and Temporary Exclusion Orders, which impose curbs such as compulsory reports to a police station, overnight curfews, and in some cases the ability to forcibly relocate suspects within the UK.

These measures will be accompanied by mandatory enrolment on the Home Office’s Desistance and Disengagement Programme — a branch of the controversial Prevent scheme to deradicalise potential extremists, but toughened to combat the threat posed by those who have already demonstrated a clear terrorist affiliation.

Katherine Brown, a senior lecturer in Islamic studies at the University of Birmingham, argues DDP is the most challenging part of the returns process. “If what you’re after is a change in behaviour then that’s fundamentally easy to do through TPIMS and other similar restrictions,” she says. “But if you want to change their minds — so that even if they have the opportunity to participate in something in the future they choose not to — that’s a different and much more intensive approach.”

The Home Office has not released many details of the DDP scheme, which has only been trialled with small numbers. One Whitehall official said newly returned fighters will be given psychological support and theological advice from deradicalisation mentors. In some cases they will be helped to find housing and employment.

According to Emily Wintherbotham, director of the terrorism and conflict group at the Royal United Services Institute, the advantage of DDP is that it provides a way “to deal with people who haven’t necessarily committed criminal acts but have still been exposed to extreme levels of violence and indoctrination, who need to be in some sort of supportive process”.

But she added that because there is little evidence from the field of deradicalisation, it is hard to predict what will be effective. “It’s not surprising that when you come to a . . . sensitive area such as DDP that you don’t have publicly available information about whether this is working,” Ms Wintherbotham said. “Do we have it right yet? Probably not.”

The stakes are high precisely because mismanagement of returnees can cause the entire process to backfire. “The lessons we learn from other hostilities is that we could end up, through our failure to confront the challenge of foreign terrorist fighters, generating a whole new cohort of people with hostilities towards us,” she warned.

How to dress for a staycation | Jess Cartner-Morley