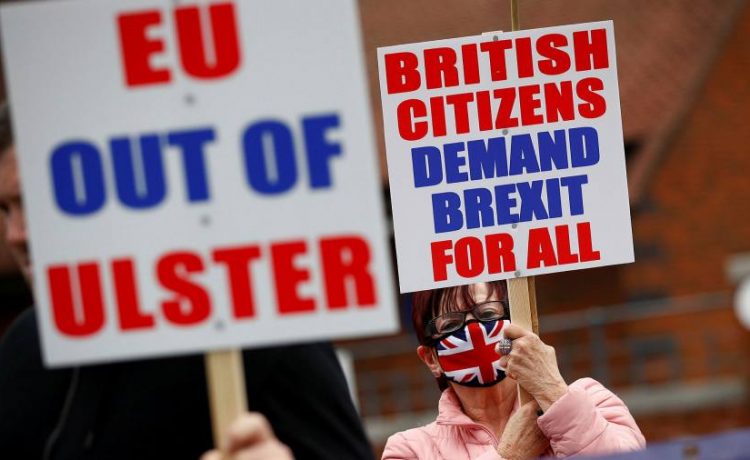 There is a truce in the British-EU sausage war. The extension of the grace period for chilled meats going from Britain to Northern Ireland has bought time to find solutions. It is unlikely to be used successfully. And it concerns a part of the world which lacks the luxury of using war as a metaphor for trade disputes.

The Northern Ireland protocol is a legally binding international instrument. Unfortunately, it is also a Brexit unicorn. We can identify three species of this unreal creature.

The first are proposals that are fantastical because the other side will never accept them. They include ideas aired by successive British governments that required the EU to accept imperfect enforcement of their single market’s rules. For this reason, they went nowhere.

The second are proposals that are technically unworkable. The most memorable one I heard when working for Theresa May’s government was for Northern Ireland’s border to be policed by drones. Technical challenges aside, border communities were unlikely to welcome being buzzed day and night by flying cameras.

Third, there are proposals that are negotiable and technically workable but cannot be implemented on the ground. This protocol is such a unicorn, as both sides should have known. By creating a palpable barrier, it harms the unionist community’s sense of British identity and feels like a breach of the 1998 peace settlement. Boris Johnson’s government now hesitates to implement their agreement, in part at least for fear of the consequences.

The government’s persistent denial of this treaty’s legal and practical consequences betrays a guilty conscience. It also points to bad faith in implementing it. An inability to tell the truth about what it has done and why makes this government an unpersuasive advocate for changing the protocol. It gives the EU no reason to trust what it says.

When British ministers talk about the risk of civil disorder, they are thought to be crying wolf. The worst motives are imputed: that this British government is not alerting the EU to discontent in Northern Ireland but encouraging it. When habits of discourtesy are added to distrust, the EU is unpersuaded by ministers’ explanation that their choice is between letting tensions rise in Northern Ireland or action, unilateral if need be, to pre-empt it.

As for the EU, it just wants what was agreed in the protocol to be implemented. But the world is not so simple. If a border between Northern Ireland and the Republic of Ireland is a threat to the peace process, the same logic applies to a border between Northern Ireland and Britain. The protocol’s stated purpose — to uphold the Belfast/Good Friday Agreement — and its actual terms only partly cohere.

No kind of Brexit is helpful for Northern Ireland, but it can be made tolerable. For that, the protocol must be made acceptable for both unionist and nationalist communities. The UK and the EU each rejects the other’s proposed improvements.

The UK asks the EU to take a risk-based approach to goods from Britain destined for Northern Ireland, not the EU. The EU fears this precedent. But, trivial exceptions aside, nowhere else does the single market’s border run through a country outside the EU. Nowhere is it so entwined with a delicate peace process.

The EU proposes that the UK aligns with EU agrifood rules. This would remove some painful parts of the British-Northern Irish border and would benefit all British agrifood trade with the EU. But it would in effect mean rule-taking.

The EU is many things: a peace project, a vehicle for prosperity, a means to empower its member states with collective strength. It achieves these through interdependence. Brexit seeks independence for the UK, but Northern Ireland alone means that the idea of a clean break is the biggest unicorn of all.

Independence can work at a distance. The difficulty is that the EU offers a degree of dependence to neighbours who want or need public goods created by closer ties but reject membership. As the Swiss debate shows, this creates hard choices.

The ideological cost of each side’s answer to Northern Ireland’s problems is too high for the other. Each thinks it can politically bear the pain of any penalty the other might impose for continued disagreement. Each side worries more about giving the other free concessions than jointly making a peace process work.

Continued disagreement seems easier than compromise of principle which might turn a unicorn into a real solution. So the UK and EU are likely to use the grace period to carry on throwing metaphorical stones at each other. The longer they do, the likelier such stone throwing in Northern Ireland is to be literal.