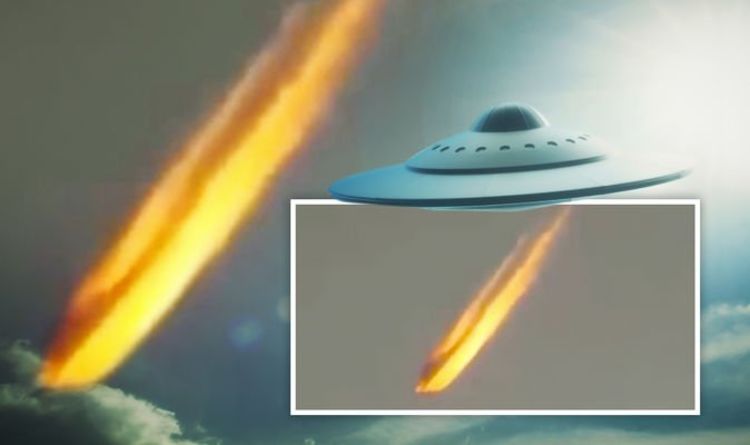 On Sunday, December 27, 2020, many people on the US east coast took to Twitter to report a strange sight in the skies. Numerous videos were swiftly uploaded to social media apparently showing an object dramatically burning-up as it hurtled to Earth – with one clip attracting more than 1.4 million views alone. The clips showed as the bright orange fireball shot across the skies in a stunning display.

Two eyewitnesses in the original video are heard remarking how the object in the sky was “weird”, as well as questioning whether it was a plane and added something was “burning”.

Such spectacular incidents are actually quite common phenomena with far more prosaic explanations.

The American Meteor Society has confirmed most of these so-called ‘fireballs’ are not meteorites or associated space debris.

These events are instead the result of a contrails, created when exhaust gas from a high-altitude plane combine with water vapour in extremely cold environments.

The consequential linear clouds often have vivid red or orange hues due to the Sun reflecting from them at sunrise and sunset.

READ MORE: ‘UFOs seen near Nellis Air Force Base which is home to aliens’

And journalist Peter Thiele joked: “The aliens found our world’s intelligent Life … and it is in West Virgina!”

Waring’s bizarre claims quickly garnered scores of comments on his YouTube channel, with many of appearing to criticise his UFO theory.

YouTube viewer Outlander1968 wrote: “Once the video gets focused on the lead object – you can see a linearity, and see that it’s an aircraft (hence a contrail), plus the speed of the object is too slow – says it all.

And Credulous Boomer Rube apparently agreed, commenting: “I heard a pilot say that he thought this might be a plane contrail illuminated by the setting sun, just at a weird angle.”