He is credited with first nicknaming the anomalies “Tic-Tacs”, after verified footage of the objects shot from an infrared camera of his F/A-18 Super Hornet was released.

However, some conspiracy theorists suggest the distinctly-shaped objects have in fact appeared in the skies for many years.

The latest uncorroborated assertions arrive in the form of a reexamined archive video, supposedly first captured in 2013, over Owego, New York.

This obviously-amateur footage framed by a pylon, depicts a white speck streaming from left to right, while a dark cluster of pixels remains relatively static.

UFO hoax buster Scott Brando of ufoofinterest.org is neither impressed by the quality of the video nor Mr Waring’s claims.

JUST IN: SpaceX CEO Elon Musk on UFOs: ‘I’d know if there were aliens’

“Object omitted no sound, there was no ‘trail’ after it there was no visible wings of any kind. A short 22-second video taken on a camera phone was shot.

“The disc moved from South West to the North East over the western horizon.

“Shortly after another object same size and shape, no wings, no trail, no sound was observed flying from east (Binghamton, NY) to the North West, however higher in the sky than the first object.

“Having observed thousands of flights going over this area in the last 30 years, I have never seen anything like this before.”

READ  Life on Mars: Has NASA's Curiosity discovered a 'humanoid' alien on the Red Planet?

Despite the compelling nature of the apparent eyewitness’ account, Waring’s questionable contention drew some wither response on his YouTube channel.

Among the scores of people commenting, viewer Dutch Van Der Linde wrote: “I need to say something, I think all of us here already saw a spaceship / UFO / orb whatever, but so.

“But some of them, like this one, shows what appears to be a plane or for this one, a plane and a power line.”

And Tahir Usman appeared to agree with this more realistic analysis, writing: “First off could be an aircraft and that disc is a power fitting not showing the line cos of low res vid.

Finally, kidpoker007 added: “That grey is part of the power line you can see another one right below … nothing to see here another false alarm.” 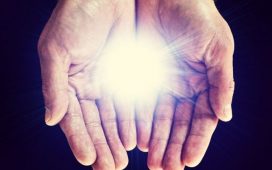 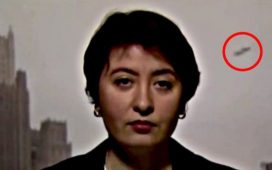 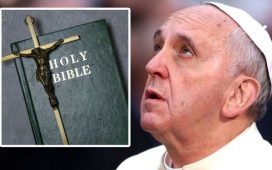 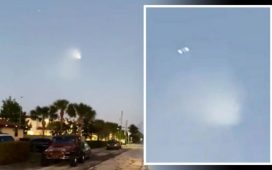