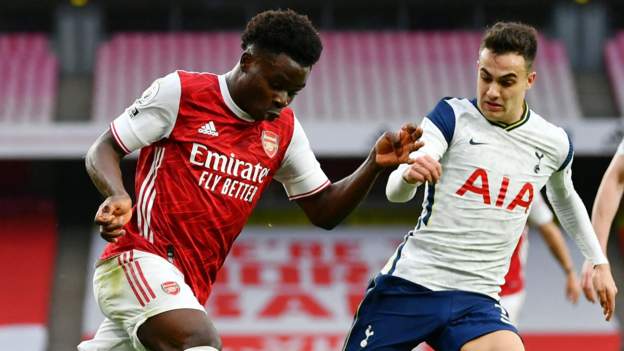 Uefa, the Premier League and UK Prime Minister Boris Johnson have condemned 12 major European clubs, including the ‘big six’ from England, signing up to a breakaway European Super League.

Uefa said it will use “all measures” possible to stop the “cynical project”.

Senior figures at European football’s governing body are furious about the proposals.

Johnson said the plans would be “very damaging for football” and that the UK government supports the sport’s authorities “in taking action”.

He added: “The clubs involved must answer to their fans and the wider footballing community before taking any further steps.”

The European Clubs’ Association (ECA), which represents Europe’s clubs, held an emergency meeting on Sunday in the wake of the reports.

BBC Sport understands none of the clubs mentioned in the Super League reports responded to a request to attend the meeting.

The meeting was chaired by Ajax chief executive Edwin van der Sar. Bayern Munich and Paris St-Germain were among the clubs who were present.

In a statement the ECA said it would be “strongly opposed” to a “closed super league model”.

It has pushed plans for a 36-team Champions League, which Uefa had hoped would head off the formation of a Super League. The Champions League reforms are set to be confirmed on Monday.

BBC Sport was told last week of plans for some sort of confirmation about a European Super League.

They said they will “remain united” in trying to stop the breakaway, using both judicial and sporting measures if required.

They also reiterated Fifa’s stance that players taking part in the Super League would be banned from all other competitions at domestic, European or world level and could be prevented from representing their national teams.

In a separate statement, the Premier League said it condemned the proposal as it “attacks the principles of open competition and sporting merit which are at the heart” of domestic and European football.

Culture Secretary Oliver Dowden said in a statement the government is “concerned this plan could create a closed shop at the very top of our national game”.

He added: “We have a football pyramid where funds from the globally successful Premier League flow down the leagues and into local communities.

“I would be bitterly disappointed to see any action that destroys that.”

Labour leader Keir Starmer said the clubs involved should “rethink immediately” or “face the consequences of their actions”.

“This proposal risks shutting the door on fans for good, reducing them to mere spectators and consumers,” he said.

However, those clubs are among those to have broken ranks, to the fury of Uefa, whose president Aleksander Ceferin wanted to stave off a Super League threat.

The Premier League said a European Super League would “destroy” the dream of fans that “their team may climb to the top and play against the best”.

It added such a league would “undermine the appeal of the whole game” and that they would work with the FA, the English Football League, Professional Footballers’ Association (PFA), League Managers Association (LMA) and fans to “defend the integrity and future prospects of English football”.

The FA said it will “not provide permission to any competition that would be damaging to English football” and will “take any legal and/or regulatory action necessary” to stop it.

Bundesliga sides are opposed to the plans because the German model means commercial investors cannot have more than a 49% stake in clubs, so fans hold a majority of their own voting rights.

French Ligue 1 side Paris St-Germain are not part of the group either.

Uefa said it thanked “those clubs in other countries, especially the French and German clubs, who have refused to sign up” to the breakaway league.

“We call on all lovers of football, supporters and politicians, to join us in fighting against such a project if it were to be announced,” it added.

“This persistent self-interest of a few has been going on for too long. Enough is enough.”

Quite when the European Super League would start is unclear.

However, world governing body Fifa has already said it would not recognise such a competition and any players involved in it would be denied the chance to play at a World Cup.

Serie A has called an emergency board meeting to discuss the matter.

The Football Supporters’ Association said it is “totally opposed” to the plans, which it said were “motivated by nothing but cynical greed”.

It added: “This competition is being created behind our backs by billionaire club owners who have zero regard for the game’s traditions and continue to treat football as their personal fiefdom.”

The PFA said it had “substantial concerns” about the proposal, adding it would “detract from the strength and joy of domestic football and diminish the game for the vast majority of fans across the continent”.

France’s President Emmanuel Macron said he “welcomes the position of French clubs to refuse to participate” in a European Super League “that threatens the principle of solidarity and sporting merit”.

A statement from the French presidency added: “The French state will support all the steps taken by the LFP [France’s professional leagues governing body], FFF [France’s football association], Uefa and Fifa to protect the integrity of federal competitions, whether national or European.”

It has been agreed the new-look Champions League will involve an initial phase where every club plays 10 matches each rather than the current group phase.

In addition there would be play-offs, followed by a knockout phase.

The most controversial aspect of the proposals surround the allocation of the four additional places, with two being reserved for the clubs ranked highest in Uefa’s co-efficient table who fail to qualify for the Champions League through their domestic competition, but do secure some kind of European football.

At the moment, Liverpool and Chelsea would be the clubs who benefited from that system if it was in place this season.

“Honestly, we have to wrestle back the power in this country from the clubs at the top of this league and that includes my club.”

The former England defender said the six English clubs involved should be docked points and fined.

“We’re in the middle of a pandemic and an economic crisis. Football clubs in the [semi-professional] National League are going bust, furloughing players and these lot are having Zoom calls about breaking away.

“Dock them all points tomorrow. Put them at the bottom of the league and take the money off them. Seriously. You have to stamp on this.”