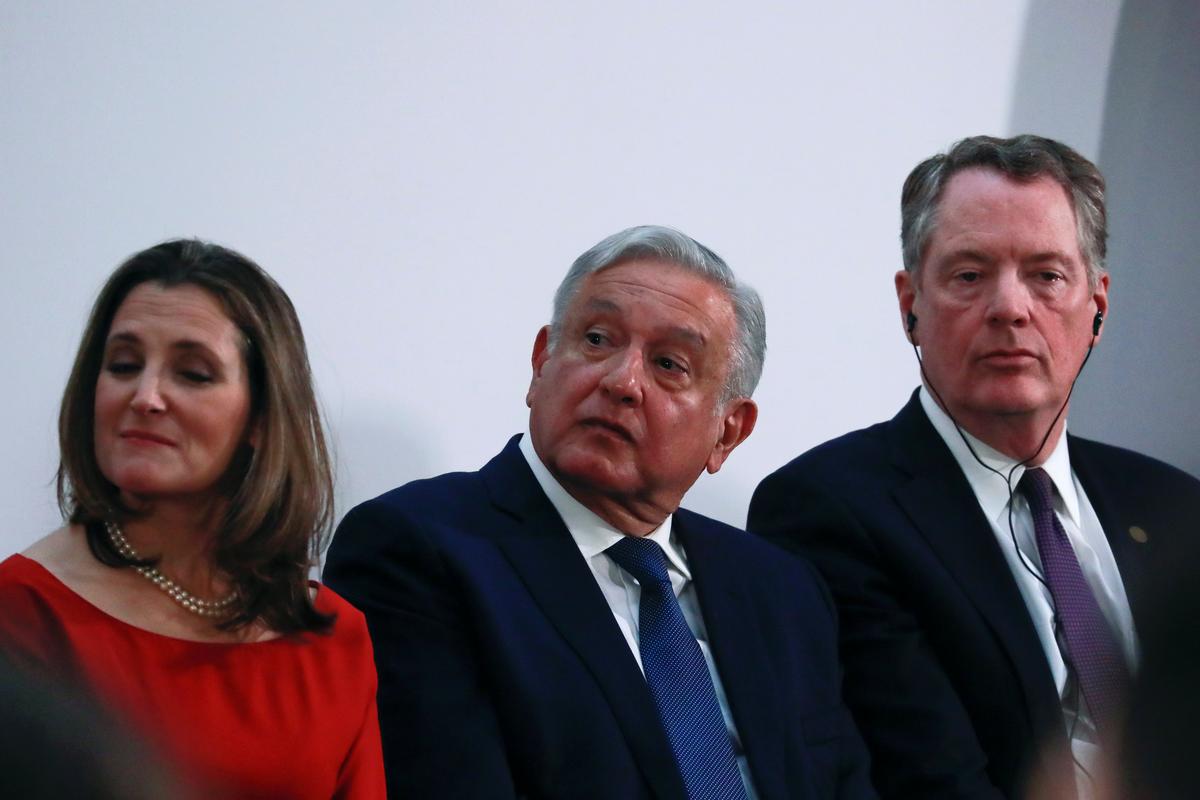 WASHINGTON/MEXICO CITY (Reuters) – Top officials from Canada, Mexico and the United States signed a fresh overhaul of a quarter-century-old trade pact on Tuesday that aims to improve enforcement of worker rights and hold down prices for biologic drugs by eliminating a patent provision.

The signing ceremony in Mexico City launched what may be the final approval effort for U.S. President Donald Trump’s three-year quest to revamp the 1994 North American Free Trade Agreement (NAFTA), a deal he has blamed for the loss of millions of U.S. manufacturing jobs.

The result of a rare show of bipartisan and cross-border cooperation in the Trump era of global trade conflicts, the deal was inked the same day as he became the fourth U.S. president in history to face formal impeachment.

Lighthizer called it “a miracle” that actors from across the political spectrum had come together, calling it a testament to the benefits of the deal. Lopez Obrador credited Trump for working with him, while Freeland celebrated a win for multilataralism.

“We have accomplished this together at a moment when, around the world, it is increasingly difficult to get trade deals done,” she said.

The U.S.-Mexico-Canada Agreement (USMCA) was signed more than a year ago to replace NAFTA, but Democrats controlling the U.S. House of Representatives insisted on major changes to labor and environmental enforcement before bringing it to a vote.

Intense negotiations over the past week among Democrats, the Trump administration and Mexico produced more stringent rules on labor rights aimed at reducing Mexico’s low-wage advantage, including verification of labor compliance at the factory level by independent labor experts.

“It is infinitely better than what was initially proposed by the administration,” House Speaker Nancy Pelosi told a news conference, adding that USMCA was now ready for a House vote.

Some Mexican business groups fear that Lopez Obrador and his chief negotiator, Deputy Foreign Minister Jesus Seade, have ceded too much, and call the labor verification a violation of Mexican sovereignty.

Seade himself, who signed the deal on Tuesday, said some of the changes were reasonable but not necessarily “good for Mexico.”

Next “they’ll cede the Isthmus of Tehuantepec,” said Gustavo Hoyos, president of employers federation Coparmex and a vocal Lopez Obrador critic, referring to a strategic region of Mexico. He called the government “a bad negotiator.”

Republican and Democratic U.S. lawmakers say there is broad support for revising the trade pact, which encompasses $1.2 trillion in annual trade across the continent and supports 12 million U.S. jobs and a third of American agricultural exports, backers say.

U.S. House Ways and Means Committee Chairman Richard Neal, a Democrat, said sections of the text would be reviewed by lawmakers, but he saw no reason for “unnecessary delays” in bringing the trade pact to a vote on the House floor.

However, in a new wrinkle to swift ratification in the United States, U.S. Senate Majority Leader Mitch McConnell said the Republican-controlled Senate would not take up the deal before congressional recess, potentially pushing the vote into next year.

That seemed to put him at odds with Trump spokeswoman Stephanie Grisham, who said the White House would “push hard” to get the implementing bill passed before year end.

Trump launched a renegotiation of NAFTA in his first year in office, intent on delivering on his 2016 campaign promise to replace what he has derided as the “worst deal ever.” Canadian and Mexican leaders reluctantly agreed to join the negotiations with their largest trading partner.

“America’s great USMCA Trade Bill is looking good. It will be the best and most important trade deal ever made by the USA. Good for everybody,” Trump tweeted on Tuesday. “Importantly, we will finally end our Country’s worst Trade Deal, NAFTA!”

For Democrats, the deal serves as a retort to Trump’s and Republicans’ assertions that their only agenda was pursuing his impeachment.

In addition to the labor provisions, Democrats said they won elimination of a 10-year data exclusivity period for biologic drugs from the agreement, which they feared would lead to higher U.S. drug prices.

But Pelosi said she lost her bid to remove liability protections for internet service providers, a provision she had called a “giveaway” to big tech companies.

U.S. Trade Representative Lighthizer included a last-minute demand of Mexico for a tighter definition of steel and aluminum in USMCA’s automotive rules of origin to be “melted and poured” in North America. While USMCA originally required 70% of the metals used in North American vehicle production come from the region, it did not specify production methods, opening the door to the use of semi-finished metals from China and elsewhere.

READ  Star Wars: The life of a props trainee on set

Mexico and Canada agreed to a seven-year phase-in of the new standard for steel, industry sources familiar with the deal said. The aluminum demand was dropped, but with the caveat that it would be reconsidered in 10 years.

Free lunch! Bosses lure bankers back where they can see them

Barclays: We want our people back in the office

Loving Captivity: a sweet, tech-savvy web series about love and dating in quarantine

Penny Lancaster prepares to join police as a special constable