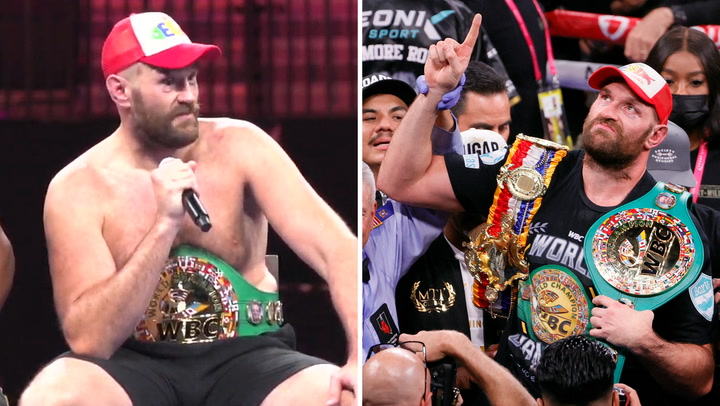 Tyson Fury ‘s head trainer SugarHill Steward was seemingly unfazed after Fury was dropped twice in the fourth round during his win against Deontay Wilder.

Fury rallied after suffering the double knockdown to knockout Wilder in the eleventh round, putting a decisive end to their rivalry.

‘The Gypsy King’ partnered with Steward before his rematch with Wilder last year and said his strong relationship with the veteran coach was a key part of his fight preparations.

And Steward said after the fight that he didn’t address the knockdowns when advising Fury after the fourth round.

He told Boxing Social : “I tell you I don’t actually remember but at that part, it wasn’t anything about a knockdown. That’s what everybody wants to know. It was just me giving him directions on how to fight, what to do.

Steward advised Fury to seek the KO against Wilder
(

“I don’t remember saying anything about a knockdown, like ‘oh watch out for this’, it was just, ‘get back to boxing’.”

Fury and Steward first met in 2010 at the Kronk Gym in Detroit which was led by the legendary trainer Emanuel Steward, who is SugarHill’s uncle.

The two wouldn’t link up again until after Fury’s edgy decision win against Otto Wallin 2019, as the Brit parted ways with his coach Ben Davison after the fight.

Fury said he was acting on the advice of his trainer Steward who told him to stop “messing around” in the later rounds and search for the knockout.

What were your thoughts on Fury’s knockout win against Wilder? Let us know in the comments section below

He said after the fight: “I want to say if it wasn’t for Sugar (Hill), America’s and Detroit’s own, I wouldn’t have gotten through that fight tonight.

“He told me, he said get your jab working, big guy, and throw that right hand down the middle. That’s how the big dogs do it.”

“He was like to me in [rounds] nine, ten and eleven ‘get this beep beep out of here! Stop messing around, the big dog gets him out late. And he pushed me to knock him out, he really did.”

Wilder admitted Fury – who was almost 40 lbs heavier than his opponent – was the better man on the night and said the weight difference played a big part in draining his energy.

He said: “I did my best, but it wasn’t good enough tonight. I’m not sure what happened. I know that in training he did certain things, and I also knew that he didn’t come in at 277 pounds to be a ballet dancer.

“He came to lean on me, try to rough me up and he succeeded.”