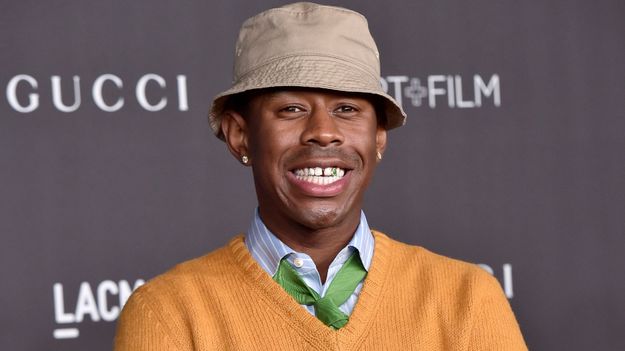 The most memorable part of Tyler, The Creator‘s video for “Earfquake” from his latest studio album Igor, is him wearing a platinum blonde wig and sky blue suit, rigid with his movements and hilarious whenever he opens his mouth. This ensemble, which has come to be known as the Igor suit, isn’t just some random fit. In a cover story for GQ’s Men Of The Year Issue, Tyler discussed what the outfit means and where it comes from.

The Igor costume started as a stop-motion character based on a particular female silhouette that was interesting to him, “with the scarf and the cool blazer.” “It’s like, I don’t have the hair to pull that silhouette off. So it’s like, man, if I was a fucking white lady in Denmark.” Elsewhere in the cover story, he talked a bit about the meaning of the costume. “The Igor shit plays a thin line between goofy and funny and art,” he said. “I always have to be careful so it doesn’t fuck everyone’s perception up. It’s art and an idea.”

Tyler also talked a bit about how he felt after an epic performance at Madison Square Garden in September. “It was one of the craziest feelings,” he said. “If I died right now… Bro, I don’t know. I was okay with everything.”

Check out the full interview in the link up above.

Frank Sinatra's gold toilet sells for THOUSANDS: Would you sit on this 'throne'?

Flashback: Genesis Perform an Epic ‘Watcher of the Skies’ in 1973

Animal-Era Kesha Comes Out To Play On New Single ‘Tonight’

Ode to Joy: the lyrics and meaning behind the EU anthem, and why a campaign is trying to make it UK No 1 on...

Guns N Roses at Glasgow Green 2020: tickets, presale, date and everything else about the band's Scotland show