This makes the two cases, announced by Mayor Bill de Blasio on Wednesday, among the 12 infections recently confirmed across the state.

The two people live in Manhattan and Queens, respectively, and one of them had recently traveled to the UK.

With cases of the new variant spreading, now infecting least 85 people in 13 states, de Blasio called once again for a complete travel ban from the UK.

WIsconsin and New Mexico each reported their first case of the super-infectious UK variant on Wednesday.

One is virtually identical to the UK variant, but evolved  independently in the US. A second is completely unique to the US and has become dominant in Columbus, Ohio. At least 83 people across 11 states have contracted the new strain, which is up to 70% more transmissible

De Blasio said the two patients are currently in isolation and have been in contact with the state’s Test And Trace Corps.

‘Obviously, they’re being followed up on and supported,’ he said.

The US now has its own homegrown ‘super-covid’ variants that are more infectious than the most common coronavirus types in the US – and the new variants are spreading like wildfire in at least one state, Ohio scientists revealed Wednesday.

One of the new, more infectious variants has already become dominant in Columbus, Ohio, where it was discovered.

This unique US variant has three mutations not seen in the others from the UK, Brazil and South Africa.

It does have a spike protein mutation, and is thought to be more infectious than normal coronavirus.

So far, this homegrown variant has been seen in about 20 samples since Ohio State University (OSU) scientists first detected it in December.

It’s now present in most of the samples they are sequencing.

A second variant has mutations virtually identical to the UK variant’s, but arose completely independently on American soil, according to Ohio State University scientists.

Just one person with this variant has been found.

There is no evidence that either of the new variants will be immune to vaccines so far.

Scientists warn the emergency of these two variants could signal that the virus is mutating in similar ways  -but totally independently – in many locations across the world.

‘Test and Trace engaged with them and we’ll keep people updated as we have more information.

Dr Dave Chokshi, the city’s health commissioner said the two cases were diagnosed in late December and confirmed via genetic testing on Wednesday.

This likely means the variant spreading widely through the city for several weeks.

On Tuesday, the Centers for Disease Control and Prevention (CDC) announced that, on January 26, it begin requiring all international travelers to show proof of a negative COVID-19 test before entering the U.S.

This is in addition to the Trump administration’s policy, which barred UK travelers without a negative test from entry.

Passengers are required to get tested no more than three days before their flight and show a negative result to the airline before boarding.

However, de Blasio repeated calls for the federal government to ban flights from the UK for the foreseeable future.

‘Although I appreciate the federal government is finally acting to restrict who can get on an internal flight and require them to have a negative coronavirus test, that’s not good enough,’ he said.

‘There should be an immediate travel ban from the United Kingdom to the United States. Here’s proof positive: Someone who was in the UK has brought the variant back here.’

The first case in New York was identified in a man in 60s last week at a jewelry store in Saratoga Springs, a city about 190 miles north of New York City.

Since then, two other people in the jewelry store who fell ill tested positive for the new strain as well as one person in Massapequa, Long Island.

It is unknown where in the state four of the cases are located. California currently has the highest number of reported cases with 34 in total – 32 in San Diego County and two in San Bernardino County – and Florida is close behind with 22 cases.

New York has the third highest number of cases with 12.

The strain, known as B 1.1.7., is feared to be up to 70 percent more transmissible and to spread more easily among children.

What’s more, a Minnesota case of the new variant indicates it may have been circulating in the U.S. far earlier than previously believed.

The positive sample comes from a patient that was taken on December 18 and uploaded to the global genomic database GISAID.

Meanwhile, other variants from South Africa  and Brazil have been found – but neither have any confirmed cases in the U.S. 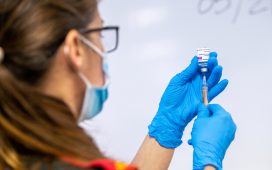