Two college students in Ohio are being tested for the deadly coronavirus that has killed 170 people in China.

The students, from Miami University in Butler County, had recently traveled to China during January break, but it’s unclear if they visited Wuhan, the epicenter of the outbreak.

Health officials took three samples – a blood draw, nasal swab and respiratory sample – and sent them to the Centers for Disease Control and Prevention, according to the Cincinnati Enquirer.

Results from the tests are expected to return within a week and, if confirmed, they would be Ohio’s first cases of the SARS-like infection, 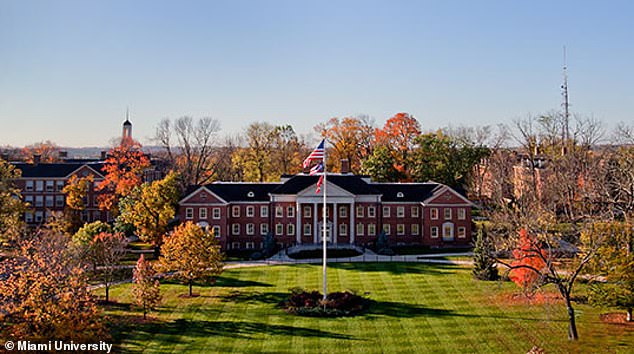 Two students at Miami University in Ohio (pictured) are suspected of having coronavirus and have had blood draws, nasal swabs and respiratory samples sent to the CDC for testing.

According to the Enquirer, one of the two students – a male Chinese national – visited Miami University’s student health services with flu-like symptoms on Monday.

After learning about his visit to China, along with his travel companion, samples were taken from both of them.

Melanie Amato, a spokesperson for the Ohio Department of Health, told the Journal-News that both students are isolated in their residences off-campus and are being monitored by the Butler County General Health District.

During a press conference on Tuesday, officials from the Ohio Department of Health (ODH)  told students that they shouldn’t be concerned.

‘Only with that travel history [to China] or with a direct contact with someone under investigation are you truly at risk,’ said Dr Amy Acton, director of the ODH, according to the Enquirer.

READ  How to beat the HRT shortage ... with alternative remedies that could keep those hot flushes at bay

Health officials said wearing masks wasn’t necessary and students and faculty could take precautions such as washing hands with warm water and soap and coughing or sneezing into an elbow.

Miami University has more than 19,000 undergraduate and graduate students on campus, with Chinese nationals making up the largest international student population at 2,334, according to the university’s website.

This is not the first time that college students have been suspected of contracting the infections.

One of the five cases in the US is an unidentified student enrolled at Arizona State University in Tempe.

Additionally, students at Texas A&M University and Tennessee Tech University were also screened, but it’s unclear if they tested positive.

The virus was recently confirmed to have emerged from illegally traded wildlife at a seafood market in Wuhan.

Nearly 8,000 people worldwide have been infected with the virus and 170 people – all in China – have died.

As of Thursday , five cases have been confirmed in the US: Maricopa County, Arizona; Orange County and Los Angeles County, California; Chicago, Illinois; and Snohomish County, Washington.

R number in UK drops again to between 1.1 and 1

High blood pressure: The signs to look out for warning of a hypertensive crisis

Covid-19: Free flu jabs offered to all over 50s in 'winter like no other'

Trump administration in 'staggering' isolation at UN on health issues