Turkish Grand Prix: Five things we learned as Valtteri Bottas wins ahead of Max Verstappen in the wet 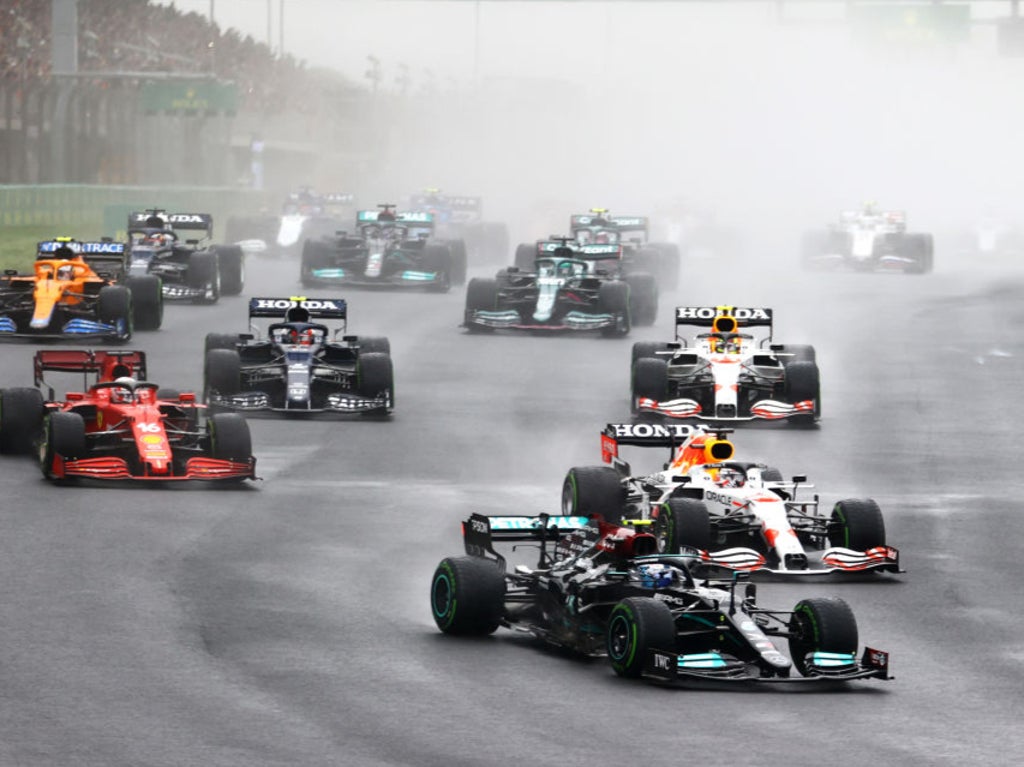 Valtteri Bottas drove “one his best ever races” to win the Turkish Grand Prix by over 14 seconds from Max Verstappen.

The Finn led from the start and after a brief squabble for the lead with Ferrari’s Charles Leclerc, saw the rest of the afternoon out comfortably in Mercedes machinery that was simply faster than Red Bull around Istanbul Park.

Lewis Hamilton was left seething over the team radio to race engineer Peter Bonnington after a late stop for fresh intermediate tyres saw him lose positions to Leclerc and Sergio Perez, with the seven-time world champion ultimately coming home in fifth.

Max Verstappen now leads the Drivers’ Championship by six points with six races left to go, and we learnt plenty more than that on a damp day.

In the Sochi rain last weekend Red Bull brought Verstappen into the pits for intermediate tyres at precisely the right moment, allowing the 24-year-old to finish second behind Hamilton in a race where he started from the very back of the grid and sought merely to limit the damage.

This time around, with the Turkish track damp and refusing to dry significantly enough for slick tyres, Mercedes found themselves going for the worst of both worlds on strategy. They left Hamilton out after he refused to pit when they requested, before eventually bringing him in with only eight laps to go when sticking with his current set of intermediates seemed more sensible.

Where Red Bull were forthright in Russia, Mercedes were indecisive in Turkey and these decisions could well prove pivotal in the championship battle come the end of the season.

Bottas hadn’t taken victory since September 2020 before dominating this afternoon’s race in what team boss Toto Wolff referred to as a “10/10” performance.

At this track last season the Finn endured one of the most torrid afternoon’s of his career, spinning five times and finishing 14th while Hamilton went to secure a stunning a win that ranks among the Briton’s very best.

And so how fateful it was that this was the track were Bottas banished his demons and delivered the kind of consistent, controlled performances that he has gone so long without.

A move to Alfa Romeo next season, who may well be given an injection of cash thanks to a proposed takeover by Andretti Autosport before the start of 2022, could lead to significantly improved results for the Swiss outfit. Their current drivers Kimi Raikkonen and Antonio Giovinazzi have performed relatively poorly over the past couple of seasons, and a confident and rejuvenated Bottas looks like exactly what they need.

Carlos Sainz in the real deal for Ferrari

Carlos Sainz took driver of the day for the first time in his career this afternoon despite starting 19th in his Ferrari.

The Spaniard mastered the wet conditions in the early stages of the race to make impressive moves on the likes of Yuki Tsunoda, Raikkonen and Giovinazzi, ultimately managing a strong eighth-place finish.

Despite only arriving at Maranello at the beginning of this season, the former McLaren man leads a very strong team-mate in Charles Leclerc by half a point.

Debut seasons with a new squad don’t come much better than this.

Just over halfway through the race Sebastian Vettel made the utterly perplexing decision to pit for a set of slick medium tyres when nothing approaching a dry line had appeared on circuit.

The German slid all around the circuit at a snail’s pace for a total of one lap before acknowledging his error and re-entering the Aston Martin pits for intermediates, almost ending up in the barrier as he did so.

Vettel’s decision making behind the wheel has been sketchy at best since 2019 and the rate at which he makes strategic and on-track errors means this is simply a significant part of his driving now. The four-time world champion ended up a lowly 18th place, ahead only of both backmarker Haas cars, and his decline is sad to watch.

Istanbul Park must stay on the calendar

The drivers were only competing at the Turkish circuit this weekend because, just like 2020, it was selected as a late stand-in for the cancelled event in Japan.

Formula 1 previously raced here between 2006 and 2011, and the track has proved a fan favourite in the past couple of years thank to the damp, changeable conditions which challenged all drivers to perform at the very height of their skill level.

Stefano Domenicali, the Formula 1 CEO and former Ferrari team boss, is busy extending the calendar and securing long-term deals with circuits around the world to secure the sport’s geographic future.

Istanbul Park should be right at the top of the Italian’s list.