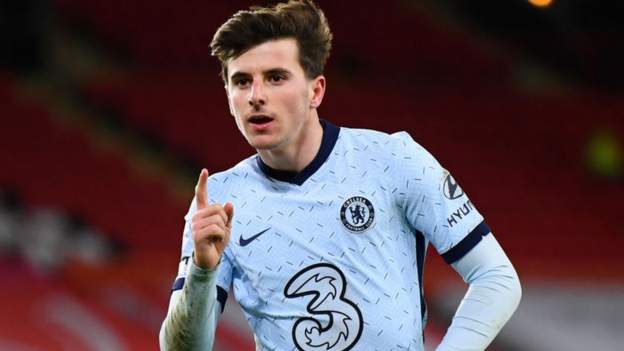 Chelsea recovered from Antonio Rudiger’s own goal to move up to fifth in the Premier League, as Thomas Tuchel’s unbeaten start as manager continued with victory at Sheffield United.

The German, who took over from Frank Lampard last month, watched as his side struggled in the opening half hour on a freezing night as Oliver Burke fired wide in the opening minute.

But the visitors went ahead before the break when Mason Mount found the bottom corner following Timo Werner’s cross from the left.

Chelsea then conceded the first goal of Tuchel’s four-game reign in calamitous circumstances when Rudiger poked past Edouard Mendy into his own net.

The winner arrived in bizarre circumstances.

Werner was brought down by goalkeeper Aaron Ramsdale for what looked like a clear penalty, but referee Kevin Friend ignored Chelsea’s appeals and waved play on.

The action continued for almost two minutes before the video assistant referee intervened, but despite the delay, Jorginho kept his cool from the spot for his sixth goal of the season.

Coming after Liverpool’s 4-1 defeat by leaders Manchester City, the win put Chelsea’s Champions League ambitions back on track after they had slipped to ninth under former boss Lampard.

Sheffield United, who had won three of their previous five games, pressed for a late equaliser but found Rudiger in the way and missed out on the chance to move above second-bottom West Brom.

Werner plays part either side of Rudiger error

Chelsea are a team still coming to terms with a change in manager and a new style.

They are now looking to assert their authority with controlled possession football, and they have quickly recovered from the decline under Lampard to move within a point of the top four.

Having drawn with Wolves and beaten both Burnley and Tottenham, this was a test of character for Tuchel’s side after Rudiger’s mistake threatened to throw them off course against a Sheffield United outfit buoyed by their recent upturn in form.

Key to the victory, also, was Werner, who failed to end his 14-game goal drought in the Premier League, yet had a hand in both goals.

The Blades’ early pressing led to a shaky start from the visiting defence, with some careless Chelsea passing almost leading to a first-minute deficit.

But after Ben Chilwell, selected ahead of Marcos Alonso, twice missed with back-post headers, they began to get a grip on the game.

That was in part down to Jorginho and Mateo Kovacic feeding the ball more quickly to the front three of Olivier Giroud, Werner and the energetic Mount.

And it was Kovacic’s driving run which allowed Chilwell and Werner to combine for Mount’s opener, his fourth goal of the season.

Rudiger, who has described how he was racially abused on social media for his supposed part in Lampard’s downfall, then handed the Blades a lifeline when he stroked the ball past Mendy into his own net following Oliver McBurnie’s surging run.

But fortunately for the Germany defender, Chelsea quickly recovered and four minutes later they were ahead again.

Werner latched onto a poor Blades’ back pass and was clattered by Ramsdale in the penalty box as he tried to round the goalkeeper.

And although referee Friend decided not to award the spot-kick, much to Tuchel’s protests, VAR eventually intervened before Jorginho stroked home.

Rudiger then made up for his earlier error with some fine defending to deny the hosts an equaliser and an injury-time save by Mendy thwarted substitute Billy Sharp as Chelsea held on.

Blades return gift as they miss chance to move off bottom

Since winning their first game of the season, against Newcastle, last month the Blades have won twice more, against Manchester United and West Brom.

However, the gap to survival has grown from nine points to 12 as the teams above the bottom three have also started to find form.

That has not disheartened Chris Wilder’s team though, as they chase an unlikely escape from the bottom three, and although Chelsea were on top after a poor start, it did not stop the hosts asking questions of their expensively-assembled opponents.

That began from the first minute when Burke should have scored and they could have had a penalty in the 11th minute when Chilwell brought down Chris Basham, but the United defender was caught offside from the initial cross.

Under instruction from the bellowing Wilder on the touchlines, the Blades were making the Chelsea defence look shaky, and Jayden Bogle almost cut through them with a mazy run.

Although their equaliser was fortunate, Sheffield United will argue they had shown enough willing to deserve a goal – but having been provided with a gift via Rudiger, they then returned the favour.

Bogle, who was otherwise excellent, left his back pass short, allowing Werner to nip in before Ramsdale, who needed treatment to a resulting head injury.

The hosts tried to get back into the game once more as Wilder introduced David McGoldrick and Sharp, but Rudiger and latterly Mendy stood in their way.

‘We’re fighting and we’re punching’ – what they said

Sheffield United manager Wilder: “It’s an incredibly tough division that we’re competing in and when you’re up against the likes of Chelsea, with the quality they’ve got, and can call off the bench.

“We’re always underdogs – massive underdogs. We were fighting with one arm behind our backs last year and maybe two now, plus half a blindfold.

“We’re fighting and we’re punching and the boys believe they can win a group of games between now and the end of the season and we’ll keep that belief.”

Chelsea boss Tuchel on Werner: “I feel he is stronger and stronger every day and he is more and more free. Today I could really feel him on the pitch, absolutely in the game mentally and physically.

“And he was decisive, and this is the most important because if he can continue like this the goals will come. I’m very sure.”

“And we said this very clearly when we started. So now, the guys put themselves in a situation where we are versus the hunters of teams up in front of us, and we are close, but it still changes nothing because the next league game will be at home, and we will be like everybody else, under pressure to continue our run and to build on the momentum.”

Werner’s proves value with another assist – the best stats

Sheffield United are at home to Bristol City in the FA Cup fifth round on Wednesday before travelling to West Ham in the Premier League next Monday.

Chelsea travel to Barnsley in the FA Cup fifth round on Thursday before hosting Newcastle in the Premier League on Monday.