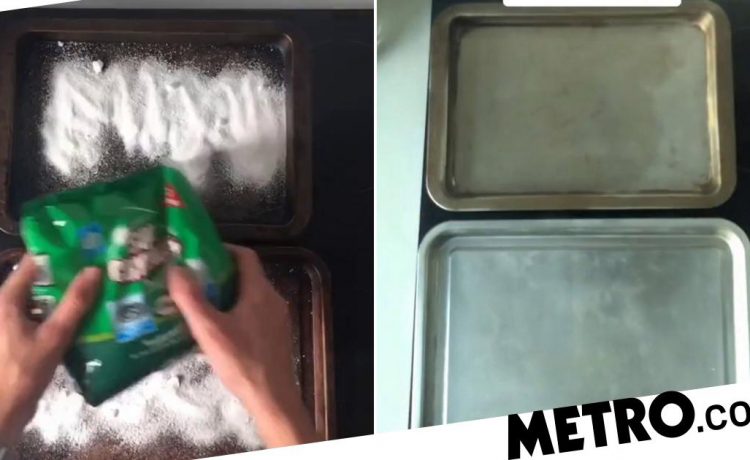 Baking trays have a funny way of ending up looking absolutely filthy.

It’s not our fault, we swear. We use baking paper and foil most of the time, but it seems that just a few incidents of popping food straight in the tray and putting it in the oven quickly adds a layer of built-up grime and oil that just won’t budge.

Sure, you can give your trays a wipe down after each use, but we’re usually too busy eating dinner to be bothered.

Then, suddenly, you look at your tray and it’s absolutely gross. You can try soaking it or scrubbing with a sponge, but that brown stuff seems to just stick around.

This hack can help – and it requires just a few basic household items.

It’s not a new cleaning trick by any means, but has recently been shared by @hazz_jazz on TikTok, who claimed the trick got his baking trays ‘so clean I can see my face in it’.

Here’s how you do it.

Dump a load of baking soda (that’s bicarbonate of soda in the UK) into your tray, then pour white vinegar on top. It’ll quickly start to fizz and foam.

Use a sponge, steel wool, or a Brillo pad to make sure the mix is worked into the sides of your tray, then leave to soak for half an hour.

When you come back, give it another quick wipe, then rinse out the solution and get scrubbing – you can use steel wool or just the rough side of the sponge.

You’ll still need to scrub for a while, but the solution makes a big difference in lifting off the brown gunk – and requires much less scrubbing than usual.

The trick has attracted a mixed response, with some thanking @hazz_jazz for sharing the technique, but most suggesting he should have just bought new trays.

Others recommended their own cleaning techniques, including using The Pink Stuff or picking up oven cleaner and using that instead.

We tried it ourselves and yes, it does work.

I used the solution on a tray with months of caked-on grease, and despite not having any steel wool and using a sponge instead, I still managed to get it looking much cleaner in a matter of minutes.


MORE : You can now buy a hot chocolate bomb with a marshmallow Baby Yoda inside


MORE : Mum shares how to make your own cheap carpet cleaner with just two ingredients

READ  H&amp;M Conscious Exclusive 2019: Shop the stylish designs made from discarded pineapple and orange peel
Share on FacebookShare on TwitterShare on PinterestShare on Reddit
newsgrooveNovember 24, 2020