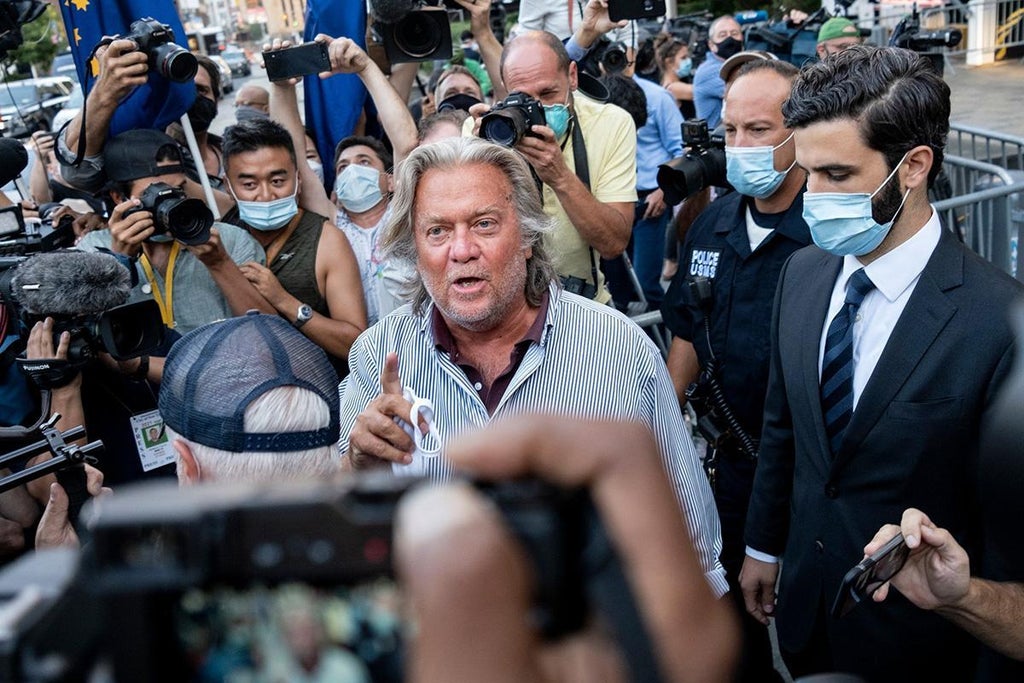 The House select committee investigating the violent attack on the US Capitol earlier this year has made sweeping use of its subpoena power, demanding documents and testimony from a range of Trumpworld figures – from former White House chief strategist Steve Bannon to Ali Alexander, the organiser of the “Stop the Steal“ rally that preceded the violence. But eight months after a mob of former President Trump’s supporters ransacked the Capitol in hopes of preventing Congress from certifying President Joe Biden’s electoral college victory, Mr Trump and some of his closest advisers are acting as if he were still in the White House.

Last month, the House Select Committee to Investigate the 6 January attack on the Capitol issued subpoenas to Mr Bannon, former White House Chief of Staff Mark Meadows, Deputy Chief of Staff Dan Scavino, and ex-Defence Department Chief of Staff Kash Patel, commanding each to produce documents and testimony regarding their actions and communications before and during the insurrection.

According to sources familiar with the matter, the select committee has been in some talks with attorneys for Mr Meadows and Mr Patel to determine what, if anything, they will provide. Mr Scavino, who ran Mr Trump’s now-defunct Twitter and other social media accounts, has yet to be physically served with the subpoena because he has been hiding from the committee staff members tasked with doing so.

And Mr Bannon, who was fired from his White House role in August 2017 but began informally advising Mr Trump again during his final days in office, has outright refused to cooperate.

In a letter obtained by The Independent, Mr Bannon’s attorney informed the committee that the former Trump adviser will refuse to cooperate with the committee on orders from attorneys for former President Donald Trump, who claim that his communications with Mr Bannon in the days leading up to the 6 January insurrection are protected by executive privilege.

“It is … clear to us that since the executive privileges belong to President Trump, and he has, through his counsel, announced his intention to assert those executive privileges enumerated above, we must accept his direction and [honour] his invocation of executive privilege. As such, until these issues are resolved, we are unable to respond to your request for documents and testimony,” attorney Robert Costello wrote. “We will comply with the directions of the courts, when and if they rule on these claims of both executive and attorney client privileges. Since these privileges belong to President Trump and not to Mr. Bannon, until these issues are resolved, Mr Bannon is legally unable to comply with your subpoena requests for documents and testimony.”

‘One president at a time’

During his presidency, Mr Trump frequently used broad and sweeping executive privilege claims to stymie the myriad inquiries into his administration. One such claim regarding testimony the House Judiciary Committee requested former White House Counsel Don McGahn was tied up in the courts for more than two years before an agreement was reached which allowed Mr McGahn to testify earlier this year – months after Mr Trump had left office.

Yet legal experts say Mr Trump lost the right to use executive privilege to shield his former advisers from being made to testify at the moment President Joe Biden was sworn in on 20 January.

According to a source familiar with Mr Trump’s thinking, the former president is hoping such claims, however meritless or dilatory, can keep his ex-advisers from having to cooperate with the committee until the start of a new congress in January 2023. If Republicans retake control of the House in next year’s midterm elections, it is unlikely they would reauthorise the committee to continue any part of the investigation that is left incomplete at that time.

But in a statement released to reporters on Friday, select committee chairman Bennie Thompson and vice-chair Liz Cheney said the panel “will not allow any witness to defy a lawful subpoena or attempt to run out the clock”, and would “swiftly consider advancing a criminal contempt of Congress referral”.

Mr Bannon’s recalcitrance could leave him right where he was before he received a presidential pardon from Mr Trump just before the latter left office – under federal indictment and facing jail time – if Mr Thompson and Ms Cheney go through with a contempt of Congress referral. It’s not something any Trumpworld figure has had to face before.

A referral to the Justice Department for contempt of Congress is one of several tools Congress has for dealing with recalcitrant witnesses – but it was not a method House Democrats could employ while Mr Trump and his appointees controlled the executive branch.

Under Title 2, Chapter 6, Section 194 of the United States Code, if the Speaker of the House (in this case, California Representative Nancy Pelosi) were to “certify” that Mr Bannon has failed to comply with a congressional subpoena, the United States Attorney for the District of Columbia is required by law to present the case to a grand jury, which would then vote on whether to indict him for contempt of Congress. If convicted, he could face up to a year in prison.

Such a remedy was unavailable to Congress during Mr Trump’s presidency as a practical matter because his attorneys general would not allow prosecutors to act on referrals from congressional Democrats, particularly when they involved people close to Mr Trump.

While Mr Biden has promised to leave any decisions regarding criminal prosecutions to the purview of Attorney General Merrick Garland, White House press secretary Jen Psaki on Monday told reporters that “of course” the Biden administration would “follow the law” if presented with a referral for contempt of Congress.

Glenn Kirschner, a former assistant US attorney for the District of Columbia, predicted his colleagues would almost certainly make a “pretty healthy evidentiary presentation to the grand jury” if Ms Pelosi were to certify to the Justice Department that Mr Bannon had defied a congressional subpoena.

“I assume the grand jury would indict and then it would move into the courts very quickly,” Mr Kirschner said.

If Mr Bannon were to insist on a trial and is found guilty by a jury, he would be required to serve at least a month – and as much as a year – in prison.

How we met: ‘I sat down beside her on a coach. Before the journey was over I’d asked her to marry me’

I used to have a rewarding life, but now I feel stuck