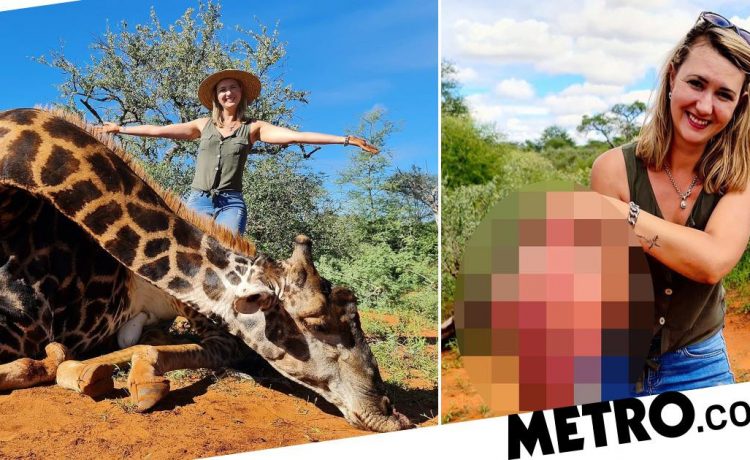 A trophy hunter’s husband paid £1,500 for her to kill an old giraffe and cut its heart out for Valentine’s Day.

Merelize Van Der Merwe, 32, posted a photograph of her holding the giraffe’s heart with the caption: ‘Ever wondered how big a giraffe’s heart is? I’m absolutely over the moon with my BIG valentines present!!!’

She told The Mirror that she calls animal rights groups ‘the mafia’ who she has ‘no respect for’.

Ms Van Der Merwe, who runs a citrus farm in northern South Africa, claims the death of the 17-year-old giraffe bull will create an opportunity for a new bull to ‘take over and provide new strong genetics for the herd’.

She was set to spend Valentine’s Day at a resort with her husband but they ‘quickly’ changed their plans when Ms Van Der Merwe heard she had the opportunity to shoot a giraffe.

She said: ‘I’d waited years for my own perfect bull – the older a bull gets the darker he gets. I love the skin and the fact it’s such an iconic animal for Africa.’

She plans to use the animal’s skin for a rug and claims the hunt ‘created work for 11 people that day’ and provided ‘meat for the locals’.

She thinks that banning hunting would make animals ‘worthless’ causing them to disappear.

‘Hunting has helped bring back a lot of species from the brink of extinction,’ she claimed.

Hunters have long argued that they are helping to keep wildlife alive by generating income for conservation efforts.

It argues the sport is not made up of philanthropic donations to conservation or locals but is a business.

It says hunters pay ‘large amounts of money for the privilege’ of killing wildlife and will pay more ‘the rarer and more impressive the animal’.

This incentivises hunting businesses to intensively breed and create more trophy animals ‘to the detriment of the wider environment’, the charity said.

‘Trophy hunting is a cruel throwback to a colonial past, and the targeting of particular animals (usually those with the most impressive traits such as the biggest tusks or the darkest manes) disrupts animal societies and has knock-on effects for populations and ecosystems that we are only just beginning to understand,’ Born Free added.

READ  Labour pledges to close loopholes used to hunt foxes, hares and deer
Share on FacebookShare on TwitterShare on PinterestShare on Reddit
newsgrooveFebruary 21, 2021