ASPIRING construction workers can live their dream by playing with real-size diggers and bulldozers at a theme park in Las Vegas.

It is called the “World’s First Heavy Equipment Playground” and has a range of experiences just 15 minutes from the Strip.

There are experiences for both solo and group diggers.

Taking 90 minutes, popular choices are a Big Dig Excavator or a Big Dig Bulldozer where you destroy anything in the path.

If you can’t choose between them, then a Mega Dig experience lets you try both.

Have some anger you need to get out? A quick 30 minute “aggression session” lets you use 30,000lb Caterpillar excavator to crush anything in sight.

Examples of things you can do include pushing over tyres, building huge mounds, or digging huge trenches.

You can also stack tyres and play basketball using the machines.

Brits wanting to try it for themselves are warned not to drink beforehand, as there are strict breathalyser tests before being allowed to use the equipment.

There are no refunds for anyone over the limit.

At the end of the experience, you are then given a Certificate of Completion having used some of the powerful machines, before heading to the gift shop to buy caps and even “dirt-scented candles”.

It has received rave reviews on TripAdvisor, with it receiving five stars from over 2,600 people.

It is also rated the number one Fun & Games activity in Las Vegas.

Many fans called it “a blast” while some said it was one of the “best things to do in Las Vegas”.

The park has even spawned a similar version in New Zealand called Dig This Invercargill.

Similar to the Las Vegas attraction, both adults and kids can play on the big machines for the day.

Ryanair launches ANOTHER sale with flights from just £4.99

WHAT EU NEED TO KNOW

Latest advice on travelling to Europe after Brexit including passports

The ‘Disney jail’ for misbehaving theme park guests including celebrities

There is a a similar theme park in the UK called Diggerland.

Guests can play on real JCBs as well as themed ride and attractions.

For gaming fans, a new Nintendo theme park will open at Universal Studios next year. 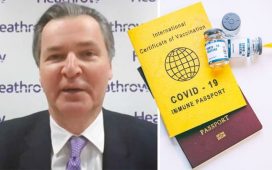