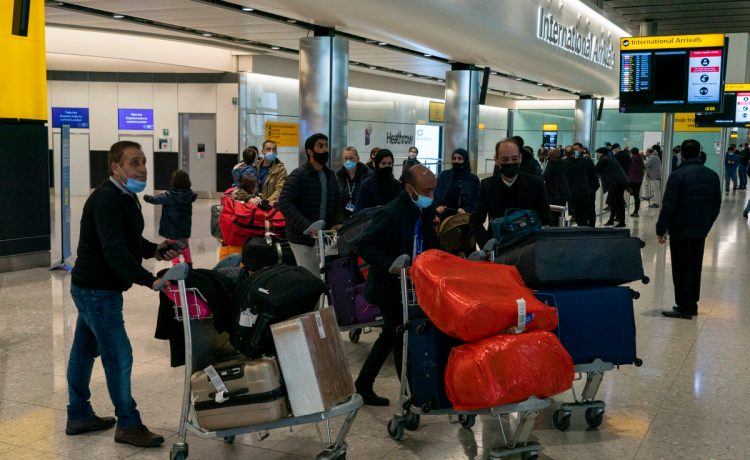 There were scenes of chaos at Heathrow Airport yesterday, as government rules came into force requiring all arrivals into the UK to show proof of a negative Covid test.

But more than 30 passengers showed up without proof of a valid negative coronavirus test, who were then fined £500 each and allowed into the country by Border Force.

The Home Office confirmed to the Mail Online that people who show up at the UK border without tests are fined and then let on their way, with a requirement to quarantine for 10 days like all other travellers.

This policy means that a number of Covid-positive people carrying new strains of the virus could be arriving into the country each day.

Those who arrived yesterday faced waits of up to two hours inside the immigration hall, with passengers complaining of a lack of social distancing.

The long queues were blamed on officials checking the details of each traveller’s Covid test, despite The Department for Transport recommending ‘spot checks’ for people flying into the UK.

One traveller returning from a business trip in Dubai told the MailOnline that while the queues were long, it just showed “they were doing it properly”.

Someone else agreed: “The checks were very thorough. Everyone had to produce the PCR test result and the locator for on. Some people had not filled out the form and went to the back of the queue.”

READ  Should I cancel my summer holiday? Coronavirus experts say to keep it booked despite virus

Gabrielle Rivers, 31, a research fellow at Oxford University, who arrived from Washington told The Times: “I don’t know how they would expect old people to cope. They are crowding people together in tight spaces. If we didn’t have Covid then, we will now. It was very rammed.”

Journalist Graeme Culliford, 42, who arrived from Dubai, told the newspaper: “It took a while because of the queues at customs.

“I suspected they would not check for negative Covid tests but they did. They were very thorough in the end. There were a few altercations between passengers and border officials and at one point I heard one official say he’d fined three people £500 already for not having proof of a test.”

All Brits must have a negative coronavirus test to arrive back in the UK from today, as well as quarantine on arrival following the suspension of the travel corridors.

The new restrictions were introduced to prevent the spread of coronavirus, and concerns about mutant strains arriving – such as those originating in Brazil and South Africa.

A number of travellers from the US were banned from boarding their flight to the UK following the new rules, according to the Mail Online, over confusion regarding their coronavirus test.

Many had a lateral flow tests – allowed by the government – but were told it was not permitted.

Other arrivals were stopped at border control as their negative test results were not in English, required by the government.

The new negative test rule was originally mean to start last Friday, but was delayed after Transport Secretary Grant Shapps said he wanted to “give international travellers some time to prepare”.

Travellers entering the UK now have to have a negative coronavirus test as of 4am yesterday.

It means passengers arriving in England by boat, train or plane – including UK nationals – will have to test negative up to 72 hours before leaving the country of departure.

The test will be checked when passengers check-in with their airline, train company or ferry before they travel, and those who refuse won’t be allowed to continue their journeys.

Anyone caught entering the UK without a negative test will face a £500 fine, and airlines will also be fined if they are caught not checking for negative test certificates.

Anyone travelling from an area that does not have the facilities in place for negative testing are also exempt for now, which includes St Lucia, Barbados, Antigua and Barbuda, although they will be included from Thursday.

IN FOR THE LONG HAUL

The long-haul holiday destinations likely to welcome Brits this year

The hidden features on a plane you never noticed

Greece & Turkey hols could restart before Spain due to Covid vaccinations

This means that when returning to the UK from any country, Brits will have to quarantine.

Arrivals must quarantine for 10 days, although this can be reduced to five with a second negative coronavirus test.

The move has been introduced across all four corners of the UK, so all the rules will be the same, and there’s no time limit on how long it will last for.