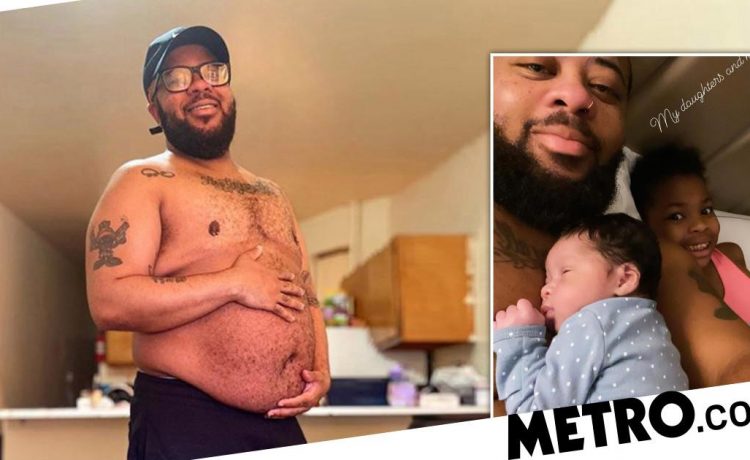 A transgender man who has given birth to two children has shared just how hard it was to go through two pregnancies.

Kayden Coleman, 34, has a seven-year-old named Azaelia and a 10-month old named Jurnee with his partner. He loves being a father, but Kayden has also shared the ‘traumatic’ experiences he went through while pregnant.

Speaking to the Today show, Kayden revealed that he was offered an abortion a ‘ridiculous’ number of times, how he was misgendered by doctors and even turned away from care.

‘There was a lot of trauma,’ says Kayden. ‘Most of that came from inside the birthing world, with medical professionals. There was a lot of questioning about my identity, a lot of misgendering. Being told I shouldn’t be in spaces I was seeking care from because they were considered women’s spaces.’

Kayden began transitioning in 2009, but so far he has kept his female reproductive organs.

In March of 2013, he had a mastectomy to remove his breasts, and had to temporarily stop taking testosterone. During this time, he was shocked to discover that he was five months pregnant with his first child, and he gave birth in 2014.

Last January, he discovered he was pregnant again, expecting a second child with his boyfriend, Dominique.

He says he was lucky in a way that people assumed his pregnancy bump was just fat, so he didn’t have to deal with constant judgement.

‘I didn’t have to walk around in fear, worrying that people wanted to inflict violence on me,’ he says. ‘They thought I had a beer belly.’

A US-based National Transgender Discrimination Survey that found that 28% of respondents reported being harassed in medical settings. 2% even said they were victims of violence in a doctor’s office.

22% of transgender and non-binary people have home births instead of hospital births, which puts them at greater risk.

Kayden is passionate about improving fertility and pregnancy care and understanding for trans people. He is now working to educate people about being trans and pregnant, and even hosts workshops on the subject.

Postnatal care is important, too. Kayden says he struggled with postpartum depression and ‘very real suicidal thoughts’ after the birth of his first child.

‘When I found out I was pregnant again, the first thing I thought to myself was, I don’t want to have another situation like that,’ he said on Instagram.

Kayden has previously spoken about growing up as a girl and how he always hated his chest.

‘But I never had bottom surgery because it’s expensive, there are often a lot of complications with it and it can numb things sexually,’ he said.

‘I knew I wanted to transition in 2007 but at that time there weren’t very many resources and a female to male transition wasn’t very common.’

Kayden said that he identified as a lesbian at the time, and his girlfriend wasn’t happy with the idea of him transitioning and tried to talk him out of it. So he didn’t properly start the process until 2009.

He continued: ‘When Azaelia was born, there were a lot of people who said they felt sorry for her and that she would grow up and be confused.

‘They said that she should be taken away and called me a monster. But it’s important for people to understand that we have full autonomy over our bodies and we should do with it as we please.

‘I think a lot of people just think that we had sex with a woman or adopted her and when she says she has to dads nobody questions her because we have taught her to be proud of who she is and where she came from.’

When he had his daughter Azaelia, Kayden had to switch his health insurance back to ‘female’, which meant he had to deal with professionals referring to him as ‘Mrs Coleman’ at appointments.

‘I think it’s important that people understand that there are a plethora of trans-identities we are not all one and the same,’ says Kayden. ‘Just because I went from female to male doesn’t mean I have a desire to date women or be hyper masculine or even be cis-gender.

‘I don’t have to hate my body or object parts of it to be considered a real man,’ he said.

‘I’m lucky enough to have a working uterus and reproductive system that allows me to carry a child and create life so why should I have to reject that part of me just because I’m trans?’

On Instagram, Kayden added that being trans-inclusive is about more than simply knowing the terminology, having a few trans friends, or a desire to ‘be an ally’.

‘It is work. Constant education. Understanding your privilege,’ he says.

‘It’s not about whether or not you quote-unquote agree with us. We don’t care about your acceptance or agreement. We just want equity and safe, inclusive care.’


MORE : Sweaty girl summer: How to manage during a heatwave


MORE : How the pandemic has changed how we feel about taking sick days

READ  My four-year-old daughter correctly predicted my pregnancy, due date and sex of the babies
Share on FacebookShare on TwitterShare on PinterestShare on Reddit
newsgrooveJune 4, 2021