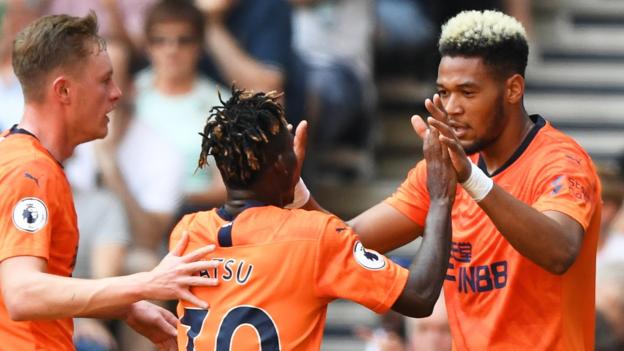 Atsu, sent on after Allan Saint-Maximin had to go off with an early hamstring injury, provided the assist with his first significant contribution.

Spurs lacked the creativity to break down a resolute Newcastle side, whose four-man midfield spent a large chunk of the contest sitting deep in front of a back five.

Son Heung-min, making his first Tottenham appearance of the season after completing a three-match suspension, saw a bouncing first-half volley beaten away by Martin Dubravka, then rolled a shot wide shortly before the interval.

Spurs boss Mauricio Pochettino sent on Christian Eriksen and Giovani lo Celso for the final half-hour in an attempt to salvage something from the 500th match of his managerial career.

It almost worked: Lo Celso’s pass for Harry Kane ended with the England captain falling under Jamaal Lascelles’ challenge – but Mike Dean ruled it was not a penalty, and was backed up by the check from video assistant referee (VAR) Anthony Taylor.

Then Eriksen’s superb diagonal pass gave Moussa Sissoko the room to cross low, but Lucas Moura skied his shot over the bar from around eight yards.

Newcastle’s fans have had to spend a fair amount on petrol money in the season’s first three weeks – with a 516-mile round trip to Norwich last weekend followed up by this 560-mile round journey to north London.

They must have wondered why they had bothered going to Carrow Road, given a feeble display in a 3-1 defeat, with centre-back Paul Dummett later acknowledging that “it wasn’t right” in the warm-up – and admitting that the players had to take responsibility.

Manager Bruce was looking for a lift after beginning his reign with two defeats – and his players provided it for that loyal travelling support.

Newcastle produced a display of immense discipline in intense heat in north London, with Dummett and his fellow centre-backs Jamaal Lascelles and Fabian Schar working themselves into the ground.

It was not just the defenders who toiled, though – striker Joelinton showed he was willing to help at both ends of the field by getting back to heard away two early Erik Lamela corners, and he ran himself to the point of exhaustion, eventually coming off in the final moments with apparent cramp.

The visitors had only 20% possession, and had to absorb plenty of early Tottenham pressure, but it was a sign of how well they did that Tottenham managed just two shots on target.

Newcastle had the game’s first shot on goal, with Sean Longstaff’s rising drive tipped away by Lloris after Joelinton had held up the ball for him.

Bruce was not thrown by the early injury to French winger Saint-Maximin, who pulled up in the first 15 minutes after chasing a Matt Ritchie free-kick that ran out of play.

Newcastle’s manager will have been pleased that his players showed such a willingness to work for the cause – a characteristic that will be vital in the months ahead.

Tottenham have conceded the first goal in all three of their Premier League matches this season – but while they recovered to beat Aston Villa and draw at Manchester City, they could not fight back here.

They may well have had a case for a 78th-minute penalty as Lascelles leaned across Kane as they chased Lo Celso’s pass; with VAR official Taylor deciding to back referee Dean’s original decision.

But Spurs did not do anywhere near enough to pick holes in Newcastle’s blanket defence until time was running out. They failed to register a single shot on goal until the 33rd minute, when Son was denied by Dubravka.

The South Korean forward was given a sign of just how tough an afternoon he would have when a promising second-minute run down the left was snuffed out by Emil Krafth, the Newcastle right-wing back.

On the occasions when Son managed to get past Krafth, he then found Schar blocking his path.

Perhaps if Moura had not steered wide when Dubravka missed Kane’s cross right on half-time, Tottenham would have had the platform on which to build a victory.

But then if Eriksen had played from the start, Spurs maybe would not have found themselves still chasing an equaliser as time ran out.

The Dane, whose contract expires at the end of this season, has made it clear he wants a new challenge – but while he remains a Tottenham player, the question for Pochettino is: Why not make full use of him?

Mauricio Pochettino, speaking to BBC Sport: “I am very disappointed with the result and the performance. We conceded a cheap goal and it is not easy to come back after that.

“You need the capacity to step up in this type of situation but we didn’t show that quality today. When the ball arrives in the last third you need something from the talent and quality we have there and today we didn’t have that.”

Newcastle boss Steve Bruce, speaking to BBC Sport: “We needed a bit of courage and thankfully the players had that from the first whistle. We have tried to quieten the storm. Hopefully that will shut a few people up a little bit. After two games, it’s been hard to get that criticism. We have had to ride it.

“I hope that gives us a little a bit of time. It is only the first win but we have seen some big performances today. They only thing you can do is show that it means something to play for the club.”

On Joelinton’s winning goal: “A lot of the players have only been here for a matter of weeks and it takes time to get used to the Premier League. I am delighted that Joelinton got the goal today. We played him a lot better today, it worked and he will be delighted to get the goal.”

So much possession, so little to show for it – the key facts

Newcastle are in Carabao Cup action at home to Leicester on Wednesday (19:45 BST) before Watford visit them in the Premier League next Saturday (15:00). Tottenham have a clear week to prepare for the big north London derby at Arsenal next Sunday (16:30).