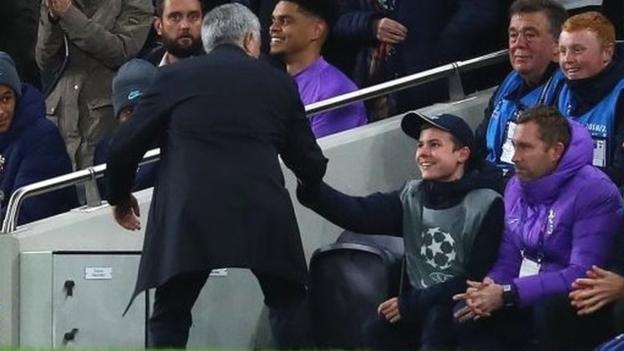 The Tottenham ball boy praised by Jose Mourinho in the Champions League win over Olympiakos says the Spurs boss’ reaction has “made my life”.

With Spurs losing 2-1 and Olympiakos attempting to regroup as the ball drifted out of play, Callum Hynes quickly gave Serge Aurier a new ball.

His throw-in found Lucas Moura, who picked out Harry Kane for the equaliser – Spurs going on to win 4-2.

Mourinho sought out Callum after the goal celebration to shake his hand and give him a hug.

The Portuguese said afterwards: “I love intelligent ball boys like I was. I was a brilliant ball boy as a kid.

“And this kid today was brilliant. He reads the game, understands the game and made an important assist.

“He’s not there just to look to the stands, lights or scarves. He’s living the game and playing it very well.”

Mourinho told BBC Radio 5 Live: “I tried to invite him into the dressing room after the game to celebrate with the team but he’d slipped away.”

On Thursday Callum, who is in his sixth season as a ball boy, told Tottenham’s website he did not see Kane’s equaliser.

“I was busy getting the ball that had come off and then I heard the cheer. I turned around and Harry was celebrating,” he added.

“I looked at the replay on the screen and watched exactly what happened.

“Jose didn’t have to do that. It was really nice of him to come over to me.

“It’s made my day, my life, really! I love Spurs and it was an amazing moment I’ll never forget.”

Callum also revealed he spent the journey back home to Leigh-on-Sea from the game revising for a maths exam.