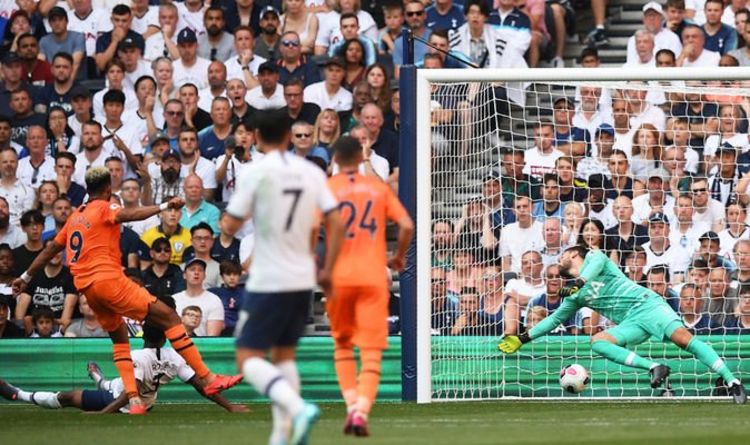 82: SUB (Newcastle) Lascelles, who goes off gingerly, is replaced by Fernandez.

81: Moura hits it over! Big chance for the Brazilian as Sissoko drills a ball across the box. It is bouncing but Moura arcs his right foot onto it and sends it over the bar.

79: Penalty shout for Spurs… turned down! Kane is played through into the area and Lascelles comes across and effectively falls into the striker, who goes down quite easily and lands on top of his compatriot as he falls down. There was not much contract but Kane did well in making it look a penalty. VAR in the thick of it again.

74: Only three per cent of the game has been played in Tottenham’s defensive third but that means nothing for the home side. Space is so hard to come by in and around the Newcastle box, you feel a free-kick or moment of magic is what it will take to break Newcastle down.

72: Joelinton stays on the field despite the hullabaloo, justifying Spurs’ decision to continue their attack.

70: Newcastle fans and Bruce are screaming at Spurs to put the ball out of play as Joelinton goes down holding his groin. Quite rightly, Tottenham continue but their slow passing passage amounts to nothing and Dubravka hurls the ball into touch at the first chance.

66: No instant impact from the substitutes – so far a very flat half from Spurs. Give or take, there are eight men clad in orange within thirty yards of the Newcastle goal at any given time.

62: SUBS (Tottenham) Eriksen and Lo Celso come on for Walker-Peters, who goes off with a hamstring strain, and Lamela.

56: Tottenham struggling to create anything… really crying out for Eriksen. Moura, 5ft 8in, heads over a half-chance, nicely reflecting the state of play.

Tottenham vs Newcastle LIVE: It was a frustrating first half for Harry Kane and Heung-min Son (Image: Getty)

52: Superb sliding challenge from Schar to block a rebound which Lamelo latched onto in the box. The Swiss slides in at the last moment to prevent a tap-in.

47: YELLOW – Ritchie booked after a late tackle. Spurs with a free-kick in a wide position.

46: Newcastle restart the second half, no changes for either side, surprisingly.

Some good news for Newcastle… and Spurs: Steve Bruce has lost one of his last 19 Premier League matches when his side has scored first – but it came against Spurs in November 2014.

That first half went as expected for Tottenham, who struggled to open up a deep-lying Newcastle defence. It was the same story against Aston Villa and Christian Eriksen came on and changed the game. That’s three Premier League games out of three in which Spurs have trailed now; they’ve got the next goal in the last two, so will be hoping to continue that trait.

As for Joelinton, a quality performance from the new Newcastle No 9, who has held the ball up well and took his goal fantastically. The defence has been regimented and the wing-backs have been positionally-aware. Bruce will be asking for more of the same.

43: The ball is precisely where the Newcastle defenders want it: in front of them. They are sitting deep and seeing what Spurs can conjure up and the answer is not much. Three shots, two on target. This home side miss Eriksen.

39: Kane has been really good at bringing others players into the game and spotting passes from deeper positions but Spurs fans and, presumably, Pochettino will want him nearer the box, where he hasn’t had a touch yet. Son shoots wide from 25 yards.

34: Spurs are piling on the pressure now and switching play, peppering the box with balls constantly. The atmosphere around the ground has picked up and Bruce’s side are on the back foot.

33: Good save from Dubravka as Son hits a half-volley into the ground from an acute angle – the keeper responds with a strong parry to safety.

27: GOAL – Joelinton! I kid you not, I was just typing a line about how well the Newcastle No 9 has held the ball up so far. Here, he scores really well. Atsu has space midway into the Spurs half and curls a pass to the Brazilian, whose first touch sets up a smart left-foot finish past Lloris.

23: Newcastle almost break the deadlock as Lacelles clips a ball forward to Joelinton, who slips it behind to Longstaff. The midfielder ignores the options on his left and leathers it towards goal with Lloris having to tip over.

21: Penalty shout for Spurs as Son goes down in the area after a meaty challenge from Schar but Mike Dean shakes his head. Looked a great tackle at first sighting and VAR agrees with Dean.

17: SUB (Newcastle) Saint-Maximin exits the field after pulling up with what looks a hamstring strain. Atsu is the man to replace him.

15: A graphic comes up showing the possession stats so far, Spurs 81%-19% Newcastle. Going the way we thought, but Spurs have failed to make any notable in-roads.

11: YELLOW – Winks is booked for a shirt tug, stopping a potential Magpies attack.

07: Tottenham sustain some pressure and have two corner which Lamela whips to the near post both times, both times cleared with ease.

03: Newcastle wing-backs don’t seem to be sitting in when in possession; Steve Bruce’s side just galloped forward and were left short in defence when Spurs regained possession. Bold, if a bit dangerous.

01: Tottenham get us underway, playing towards the imposing South Stand.

Tottenham vs Newcastle LIVE: Urm, the Toon Army are in town (Image: Getty)

4.20pm: Kick-off is upon us and it was incredibly thoughtful of Ben Stokes and Jack Leach to see England home just in time for kick-off.

4.10pm: Here’s how the numbers look ahead of this one, thanks to the boffins at Opta…

Tottenham vs Newcastle LIVE: The players go through their last-minute preparations (Image: Getty)

4pm: Mauricio Pochettino eventually captured Giovani Lo Celso on deadline day after a summer-long pursuit of the Real Betis midfielder, who joined on a season-long loan.

The Argentine does not start again today and his manager revealed his worries about the player earlier in the week. “We won’t expect too much from him,” he said.

“We need to not put the responsibility on him, only to improve and adapt himself with us and see.

“It’s a natural process to learn and improve. In the moment he will be fit and deserves to play then sure he will have the chance like other players.”

What we make of the line-ups

3.45pm: Mauricio Pochettino names an attacking side as he hopes to flay a vulnerable Newcastle. Lucas Moura, Harry Kane and Heung-min Son is a hell-for-leather front three which will look to go toe-for-toe with Bruce’s back-three and exploit the channels.

They will likely have to play in front of Steve Bruce’s defence, though, who are expected to sit deep in north London. That won’t suit Spurs, especially with Eriksen out of the starting line-up.

The last time Newcastle won away to a top-six side was Tottenham but they are a different animal now and will need Joelinton to hold the ball up well and play off scraps if they are to grab something.

3.30pm: Two changes for Spurs as Tanguy Ndombele and Christian Eriksen are replaced by Lucas Moura and Heung-min Son. For Newcastle, Allan Saint-Maximin and Sean Longstaff come in for Ki Sung-yeung and Jonjo Shelvey.

Tottenham vs Newcastle LIVE: The stage is set in north London (Image: Getty)

3.25pm: Newcastle boss Steve Bruce is under no illusions as to how tough it is going to be to beat Tottenham this afternoon.

He said: “They [Tottenham] are a very, very good side.

“We’re under no illusions as to how difficult it will be, but hopefully it’s just the right type of game for us.

“We know we’ll have to play well to get anything at all – far better than we did last week.”

3.15pm: Welcome to our live coverage of Tottenham against Newcastle on a glorious sunny day in August.

Mauricio Pochettino will want a better performance from his side despite picking up a point last time out against Manchester City.

Dele Alli could return to the starting line-up this afternoon with Giovani Lo Celso also waiting for his first start.

As for Newcastle they are yet to win a match and sit 19th ahead of Watford who have lost their opening three games.