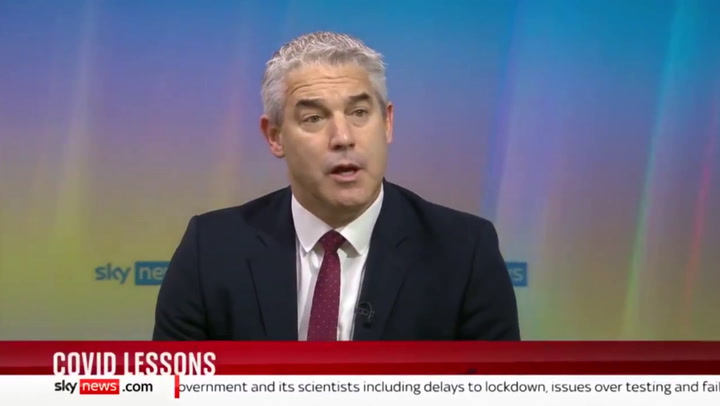 A top Tory has repeatedly failed to apologise for Covid failings highlighted in a new report which led to thousands of avoidable deaths.

Cabinet Office Minister Steve Barclay failed to say sorry more than a dozen times after MPs described the response to the pandemic as one of the worst ever public health failures.

The damning probe by the Commons Health and Science committees found ministers made a “serious error” by moving too slowly into lockdowns last year.

Experts said the 40,000 death toll in the first wave could have been cut in half if Boris Johnson had locked down a week earlier in March 2020.

Asked if he wanted to apologise by Sky News’ Kay Burley, Mr Barclay said: “We’ve followed throughout the scientific advice.

“We got the vaccine deployed extremely quickly, we protected our NHS from the surge of cases but of course if there are lessons to learn we are keen to do so.”

Pressed again on whether he was keen to apologise, he replied: “Well, no, we followed the scientific advice.

“We followed the scientific advice, we protected the NHS, we took the decisions based on the evidence before us.

“But of course, we’ve always said with something so unprecedented as the pandemic, there will be lessons to learn.

“We’re keen to learn them – that’s why we’ve committed to an inquiry and that will be the opportunity to look at what could be done differently and what lessons we take into the future.”

He also admitted that he hadn’t read the report in full.

In another interview with LBC, Mr Barclay said he recognised the “devastation” to families but the decisions were based on the information they had at the time.

Asked for an apology to those who lost relatives during the pandemic, he said: “Well I recognise it’s devastating and my heart goes out to any family, any of your listeners where they lost a loved one.”

Mr Barclay was asked eight times to apologise during the LBC interview.

Bereaved families of some of the 150,000 people who died during the pandemic said the report was a “painful confirmation” that their loved ones need not have died.

Jo Goodman, co-founder of Covid-19 Bereaved Families for Justice, said: “Although this report falls well short of holding those in power during the pandemic to account, it still manages to identify clear and catastrophic mistakes which led to tens of thousands of unnecessary deaths.”