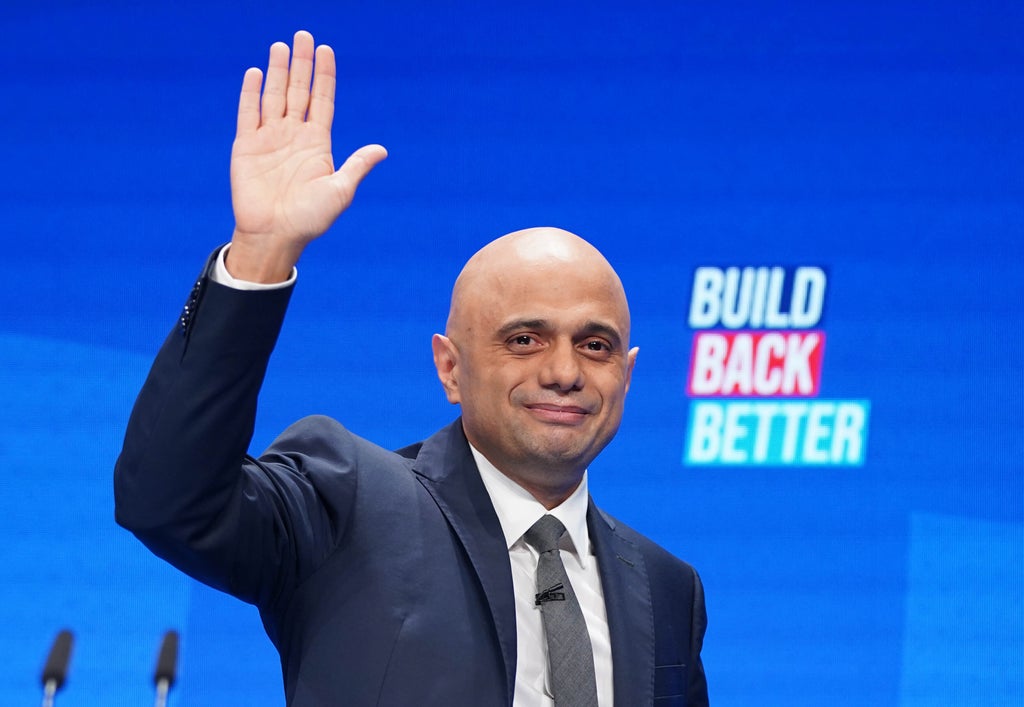 ealth Secretary Sajid Javid outlined his plans for the NHS during his Conservative Party conference speech on Tuesday.

Justice Secretary Dominic Raab and Home Secretary Priti Patel have used their speeches to focus on law and order issues in wake of Insulate Britain protests and the brutal murder of Sarah Everard.

Mr Raab announced a major expansion in the number of offenders wearing tags and to declare women’s safety the Goverment’s “number one priority”.

Sajid Javid: ‘No reform is easy, otherwise it would’ve been done’

Sajid Javid said 2022 would be a “year of renewal and reform” for the NHS, telling his party conference: “In the past, some governments chose cash, others chose reform. That’s a false choice. You can’t have one without the other.

“So yes, we will continue to prioritise funding for the NHS in the wake of this global pandemic. But I also promise you this: 2022 will be a year of renewal and reform.”

The Health Secretary reiterated that retired general Sir Gordon Messenger will lead a review of leadership and management in health and social care.

“We’ll build a future where our health and social care systems are integrated more seamlessly together.

“Where British life sciences lead the world on new treatments. Where we have not only the best surgeons, but robots performing life-saving surgeries.”

Sajid Javid said people should not always go first to the State for health and social care but to family instead.

He said: “The State was needed in this pandemic more than any time in peacetime. But Government shouldn’t own all risks and responsibilities in life. We as citizens have to take some responsibility for our health too.

“We shouldn’t always go first to the State. What kind of society would that be?

“Health – and social care – begins at home. Family first, then community, then the State.

“If you do need support, we live in a compassionate, developed country that can afford to help with that. There are few higher callings than to care for another person.”

Mr Javid went on to recall his work volunteering in a care home.

Health Secretary Sajid Javid: ‘NHS waiting list will get worse before it gets better’

Health Secretary Sajid Javid said the NHS waiting list “will get worse before it gets better”, noting it is projected to “grow as high as 13 million”.

Mr Javid went on: “No government, no health secretary, no society can accept that. That’s why we have prioritised elective recovery – check-ups, scans, surgeries – with the biggest catch-up fund in the history of the NHS.”

Health Secretary Sajid Javid said his priorities include getting the UK out of the pandemic and tackling the “huge backlog” of appointments.

He told the Conservative Party conference in Manchester: “My priorities are simple: Covid, recovery, reform.

“Covid – getting us, and keeping us, out of the pandemic.

“Recovery – tackling the huge backlog of appointments it has caused.

“And reform of our health and social care systems for the long-term.”

Sajid Javid has taken to the stage for his conference speech.

The Health Secretary starts off with a joke about how his mother was desperate for him to become a GP.

“She said, well you didn’t quite make it as a GP but at least you’re working in health care”, he says.

Mr Javid also pays tribute to the NHS workers who have worked throughout the pandemic.

“We stand and salute you.”

Military personnel who were involved evacuating people from Afghanistan following the Taliban takeover could be awarded medals, the Defence Secretary has said.

Ben Wallace said he was reflecting on the efforts of the soldiers involved in Operation Pitting in Kabul,.

Speaking at a Policy Exchange fringe event at the Conservative Party conference, he said the armed forces had shown they could perform in a “high-stress environment” as they presided over the evacuation of hundreds of British nationals and Afghans who had supported the UK during the war efforts there.

“We will reflect on whether there is medallic recognition specifically for it,” he said.

“Remember, there is always medallic recognition for the gallantry and organisational skills that are demonstrated in whatever conflict that is for our service personnel, so that is a separate programme.

“But we will obviously reflect on that.”

We’re about 45 minutes away from Sajid Javid’s speech to the conference.

The Health Secretary is set to pledge 2022 will be a “a year of renewal and reform” for the health service.

He is also due to lay out plans to cut waiting times and boost NHS efficiency in the wake of the pandemic.

It is expected that he will announce his three priorities are: “Covid, recovery and reform”.

“Covid – getting us, and keeping us, out of the pandemic,” he is due to say.

“Recovery – tackling the huge backlog of appointments it has caused. And reform of our health and social care systems for the long-term.”

Tony Blair has said there is an “urgent need” for more action from high income countries to help Africa lower its carbon emissions.

Writing in the Evening Standard ahead of the COP26 summit, the former Prime Minister says it is clear that while the science of climate change is settled, “whether we will do enough to tackle it remains an urgent and unanswered question”.

Meanwhile outside of Manchester, UK officials have held talks with the Taliban in Afghanistan in part to prevent the country from becoming “an incubator for terrorism”.

The Foreign, Commonwealth and Development Office said Sir Simon Gass, the Prime Minister’s High Representative for Afghan Transition, and Charge d’Affaires of the UK Mission to Afghanistan in Doha Dr Martin Longden travelled to the country and met with senior members of the organisation.

A Government spokesperson said: “Sir Simon and Dr Longden discussed how the UK could help Afghanistan to address the humanitarian crisis, the importance of preventing the country from becoming an incubator for terrorism, and the need for continued safe passage for those who want to leave the country.

“They also raised the treatment of minorities and the rights of women and girls.

“The Government continues to do all it can to ensure safe passage for those who wish to leave and is committed to supporting the people of Afghanistan.”

The Taliban has been in control in Afghanistan since the fall of the western-backed government in August.

Priti Patel has announced a major new inquiry into the murder of Sarah Everard.

The two-part investigation will examine the issues raised by the conviction of Met officer Wayne Couzens for her kidnap, rape and killing.

The first part will look at Couzens’ previous behaviour to establish a “definitive account” of his conduct leading up to his conviction, as well as any opportunities missed, drawing on investigations by the Independent Office for Police Conduct.

The second part will consider any specific issues raised by the first part, which could include wider issues across policing, such as vetting practices, professional standards and discipline, and workplace behaviour.

In her keynote speech, Ms Patel said that those targeting women and girls would “feel the full force of the law” upon them.