Environment Secretary George Eustice said if we ‘get another variant that manages to get around the vaccine, that the vaccine can’t deal with, then we’re into another full lockdown’ 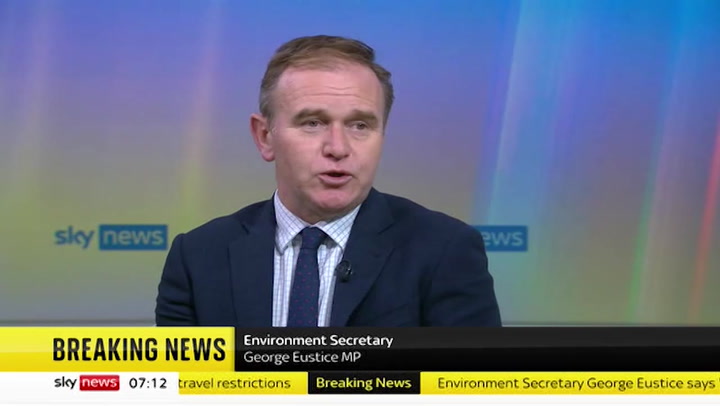 George Eustice says new variants could lead to another lockdown

England will be forced into “another full lockdown” if a Covid variant manages to “get around” the vaccine, a Tory Cabinet minister said today.

George Eustice appeared to let slip that the government has considered the option as a last resort, despite Boris Johnson insisting it is not what he wants to do this winter.

Earlier this week the Prime Minister unveiled a ‘Plan B’ for winter with mandatory masks and vaccine passports, to be unveiled if – among other things – a new variant emerged.

Nowhere in the document was there mention of a so-called Plan C, or full lockdown, to get cases further under control if Plan B is not enough.

But today, Environment Secretary Mr Eustice raised the prospect while discussing new more relaxed rules on foreign travel, which are due to be announced later.

He told Sky News: “Arguably the biggest threat to the travel industry is that we do get another variant that manages to get around the vaccine, that the vaccine can’t deal with, then we’re into another full lockdown – and that’s not what we want.

“That’s why we’ve taken this cautiously, step by step, because we want each step we take to be irreversible.”

It comes ahead of a shake-up of Covid rules for foreign travel, to be announced later today.

The green and amber lists are expected to be merged to form one category of low-risk countries, while the 62 destinations on the red list could be roughly halved.

There is also speculation that fully vaccinated arrivals will no longer need to take expensive PCR tests on return to the UK.

Currently, all those entering the UK must take the “gold standard” tests to let the authorities sequence new variants of Covid at an early stage.

But they could be replaced with lateral flow tests, which are much cheaper but cannot be sequenced.

Mr Eustice said a decision had not been made yet on travel rules, with ministers meeting today to sign off on a decision.

He stressed authorities need to be “mindful and vigilant against new variants coming in” if the need for PCR tests is relaxed.

Although rules may be eased for fully vaccinated travellers, those who have not been jabbed could face tougher restrictions.

Currently, travellers who have not had both doses of a coronavirus vaccine must take one PCR test and are not required to self-isolate after arriving from a green list destination.

The changes would come into force ahead of the October half-term break.

Transport Secretary Grant Shapps’ expected announcement on Friday will only apply to England, but recently the devolved administrations have implemented rule changes for travel announced in Westminster.

England’s Covid Plan A through to March will have five pillars to keep the virus at bay and avoid another lockdown.

They are vaccination and boosters for all over-50s; testing, tracing and self-isolation; money for the NHS and care; general advice like meeting outside or with windows open and wearing face masks in indoor crowded spaces; and taking an international approach.

Ministers promised the biggest free flu vaccine rollout “this country has ever seen”, with primary and secondary school children, pregnant women and over-50s and vulnerable groups all eligible.

People will be asked to stay at home if feeling unwell, wash hands regularly and use the NHS Covid-19 app to know if they’ve been exposed.

But more measures will be kept in reserve for a Plan B – including mandating vaccine passports in some venues and forcing face masks to be mandatory by law once again.

Under Plan B the government will “consider asking people once again to work from home if they can, for a limited period”.

Another Plan B measure will be “communicating clearly and urgently to the public that the level of risk has increased, and with it the need to behave more cautiously.”