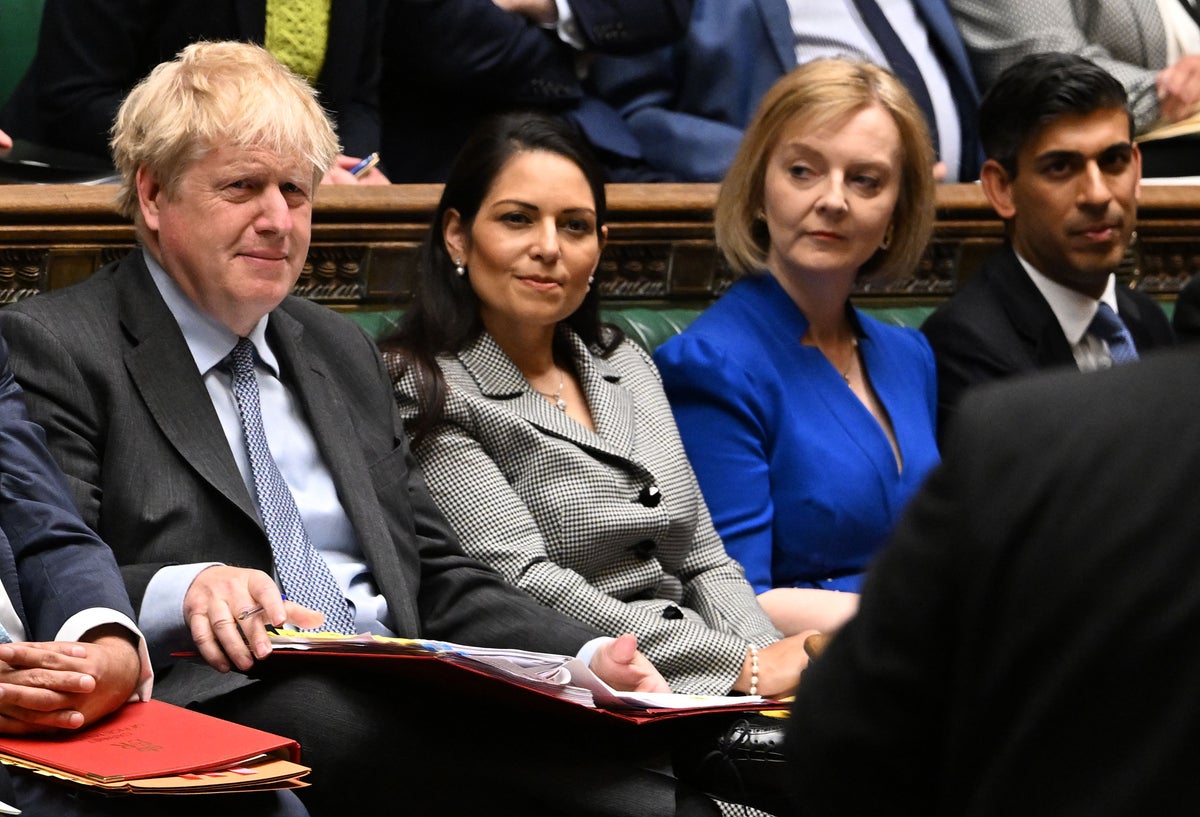 he race to replace Boris Johnson was set to become a scramble on Tuesday after it was revealed Tory MPs will begin the process of voting for a new leader the following day.

After a meeting of the 1922 Committee executive, the chairman Sir Graham Brady announced that nominations will open and close on Tuesday – with the new Prime Minister to be revealed on September 5.

In order to stand, a candidate will need the support of 20 MPs – potentially making it harder for some of the less well-known contenders to make it onto the ballot paper.

The first ballot of MPs will then take place on Wednesday, with any candidate who fails to get at least 30 votes expected to drop out.

A second ballot will follow on Thursday with further ballots to be held next week until the list of candidates is whittled down to a final two who will go forward into a postal ballot of party members.

Candidates will have a £300,000 spending limit on their campaign, excluding travel.

Sir Graham said the final result would be announced on September 5, when MPs return to Westminster following their summer break.

The demand for 20 nominations – which higher than previous Tory leadership battles – immediately throws the campaigns of several of the candidates into doubt.

Mr Sunak was set to launch his bid to become prime minister on Tuesday with a pledge to cut taxes – but only once inflation has been brought back under control.

At his campaign launch event, the former chancellor will insist he has a plan to deal with the economic “headwinds” the country is facing, saying it is a matter of “when” not “if” the tax burden starts to fall.

Mr Sunak will receive heavyweight support from another ex-chancellor, Lord Lamont, who said Mr Sunak had the courage to take the “tough decisions” needed to deal the “extremely serious” economic situation.

Mr Sunak is alone among the contenders to succeed Boris Johnson in not promising immediate tax cuts if he wins the race to become Tory leader.

He has come under attack from allies of the Prime Minister who believe his announcement last week that he was quitting helped trigger the slew of resignations which forced Mr Johnson to admit his time was up.

But in his address, Mr Sunak will seek to make a virtue of his willingness to confront difficult economic realities.

“We need a return to traditional Conservative economic values – and that means honesty and responsibility, not fairy tales,” he will say.

“I have had to make some of the most difficult choices in my life when I was chancellor, in particular how to deal with our debt and borrowing after Covid.

“I have never hidden away from those, and I certainly won’t pretend now that the choices I made, and the things I voted for, were somehow not necessary. Whilst this may be politically inconvenient, it is the truth.”

“My message to the party and the country is simple: I have a plan to steer our country through these headwinds. Once we have gripped inflation, I will get the tax burden down. It is a question of ‘when’, not ‘if’.”

On Monday Tories vying to replace Mr Johnson fought over announcing uncosted “fantasy tax cuts”, as one contender struck out at the “poisonous” battle.

Mr Javid, whose Cabinet resignation began the cascade that forced the Prime Minister out, warned rivals: “This isn’t House Of Cards.”

He set out an estimated £40 billion of plans to scrap the corporation tax hike and the national insurance (NI) levy he previously backed and to bring forward an income tax cut.

The former health secretary’s proposals came with details on where the money would come from, but other MPs battling for No 10 were criticised for failing to show their workings.

– Chancellor Nadhim Zahawi pledging to cut income tax in 2023 and 2024 and abolish green levies on energy bills for two years.

– Attorney General Suella Braverman arguing there is “no alternative but radical tax cuts” amid a cost-of-living crisis.

– Foreign Secretary Liz Truss vowing to cut taxes “from day one” and scrapping the NI hike that hit in April.

– Jeremy Hunt, who has been both health and foreign secretary, expressing a desire to “cut all taxes” in an interview with BBC Breakfast.

A row broke out among the campaigns, with Robert Jenrick criticising rivals for pledging unachievable tax cuts at a time when the party’s “credibility” is under strain.

The former Cabinet minister, who is backing Mr Sunak, told Times Radio that “announcing fantasy tax cuts to help get through a leadership election, I think, is unwise”.

Labour leader Sir Keir Starmer accused the Tories of plucking £200 billion of uncosted commitments from the “magic money tree” in an “arms race of fantasy economics”.

Mr Javid, a former chancellor, formally launched his campaign with a “new Conservative economic plan” to include scrapping the rise in corporation tax from 19% to 25%.

He argued his three tax cuts that he estimated would cost around £40 billion in 2024/25 would be paid under current fiscal headroom and “new efficiencies” in Government.

But he was dogged by questions over his non-domiciled status before entering politics.

Mr Javid, who worked in banking, refused to say where he had been based for tax purposes when asked if he used tax havens.

He warned the Conservatives face “electoral oblivion” if they do not change, as he urged colleagues to “pull together”.

Mr Johnson blamed the “herd” for his resignation as Tory leader, but Mr Javid insisted he dramatically quit the Cabinet because it was the “right thing to do”.

“This wasn’t because I could hear the hooves of a herd. If anything, I expected half the herd to turn around and charge at me,” he said.

Ms Braverman and Mr Zahawi made speeches at the Thatcherite Conservative Way Forward group as they try to win the support of fellow MPs, before Tory members vote for the next prime minister.

The Attorney General rejected critics’ warnings that cutting taxes too quickly would be the wrong move, arguing “in a cost-of-living crisis with spiralling costs, we know there is no alternative but radical tax cuts”.

Mr Zahawi, who was appointed Chancellor shortly before moving to push Mr Johnson out of office, said tax and spending had been “skyrocketing” for “too many years”.

He said he would reduce income tax to 19p next year and 18p the following year.

Ms Truss, seen as one of the likely frontrunners, formally entered the race with a slick video under the tagline “Trusted to deliver”.

The Foreign Secretary highlighted her work on trade deals and the controversial Northern Ireland Protocol Bill and said a prime minister with “experience, who can hit the ground running from day one” is needed, in a possible dig at her rivals without Cabinet experience.

She told the Daily Telegraph she would “start cutting taxes from day one”, and would cut the national insurance hike introduced in April, mirroring a pledge of rival Sajid Javid.

One of her key backers, Business Secretary Kwasi Kwarteng, accepted that public spending would need to be reduced to fulfil pledges of tax cuts.

He conceded to BBC Radio 4’s Today programme “there needs to be spending reductions” to fund tax cuts, but refused to say which services would be hit.

Transport Secretary Grant Shapps released a snappy video appealing to the Tory MPs who will whittle down the candidates by touting his experience as a campaigner.

With Conservatives nervous of losing their jobs after Mr Johnson led the party to dire recent electoral performances, Mr Shapps told MPs: “I can help you win your seat.”

Mr Johnson insisted the outcome of the bid to replace him “will be good” despite multiple candidates having worked to oust him, but he declined to back any of the candidates.

“I wouldn’t want to damage anybody’s chances by offering my support,” he told broadcasters during a visit to the Francis Crick Institute in London.

Tom Tugendhat, the chairman of the Commons Foreign Affairs Committee who has never been a minister, pledged to cut taxes on jobs and fuel and painted his candidacy as a “clean start”.

The 1922 Committee of backbench MPs will elect a new executive committee on Monday, before drawing up a timetable for the leadership contest.

An announcement on the schedule for the leadership campaign is expected to follow later that evening.

The process could be tightened so the final two candidates can be voted for by Tory MPs before the Commons enters the summer recess on July 21.

That would give the chosen pair the summer to campaign for the backing of Conservative Party members, who ultimately select the next Prime Minister. 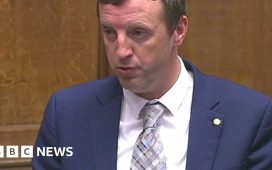 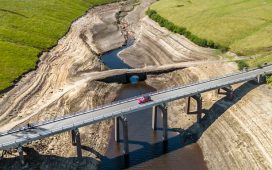 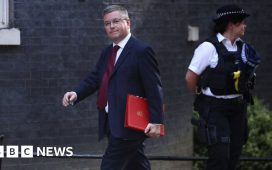 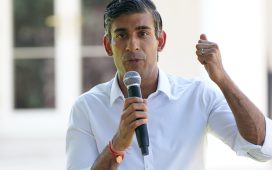