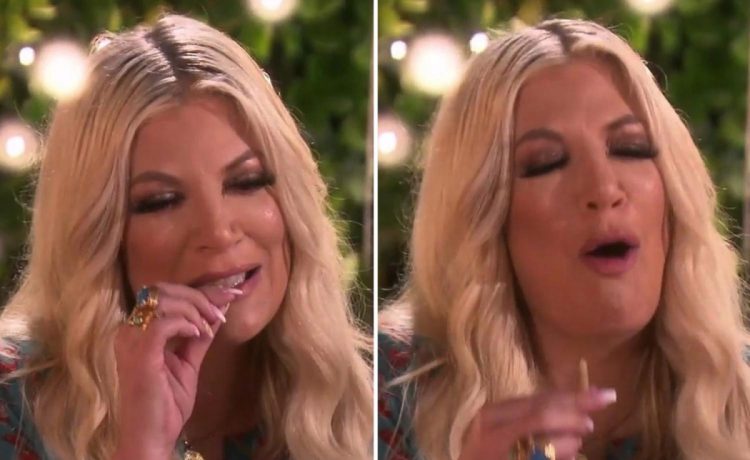 TORI Spelling shocked her peers in a preview for Lisa Vanderpump’s new show Overserved, as she willingly ate TWO worms soaked in tequila.

The Beverly Hills 90210 star partied it up with her crew of celeb friends, despite fan speculation that she is headed for divorce from her husband Dean McDermott.

Tori, 47, joined Lisa Vanderpump, 60, for dinner during an E! preview of the restaurateur’s new show Overserved, where drinks led to an interesting turn of events.

After spinning a wheel to select a challenge for the actress, the Real Housewives of Beverly Hills alum was shocked and disgusted when she revealed Tori’s fate.

Lisa dared the mom of five to eat a worm soaked in tequila, and to the table’s surprise, she willingly agreed.

Fellow guest Jeff Lewis showed concern, asking: “What happens to the worm once it’s been ingested?”

After Tori and others worried that the creature was still alive, Lisa assured them: “It’s dead. It’s been in there like, 10 years.”

The blonde was not phased by the task, as she announced: “OK, because I’m such a f–king rock star, you guys, I’m gonna take the biggest motherf–ker here.”

The TV star paused only a moment, to ask her host: “Wait, you promise me it’s dead? I don’t want to take anyone’s life.”

After receiving her confirmation, Tori bit the worm, exclaiming: “Oh, it burst!”

The Los Angeles native laughed as she added: “Tequila came out of its pores.”

In a complete shock to the rest of the table, the Scary Movie star didn’t stop there.

“Wait don’t leave the other alone!” she shouted, before popping the second into her mouth.

The entire table erupted in laughter and disgust as Lisa asked: “What’s wrong with you?”

“I couldn’t leave it alone,” Tori admitted, adding: “I have weird things about numbers.”

The busy mom recently sparked divorce rumors, after her husband Dean was absent from the family Easter celebration.

The California star shared photos of her five kids enjoying the holiday and their home’s beautiful festive decorations.

“Happy Easter… The kiddos had a magical Easter at home thanks to my friend @jeannaloveschristmas ( holiday DIY decor guru).

“And, thank you @sullivanshomedecor for all our decor goodies. Bunnies for dayz! All kiddos clothes @target xo,” she captioned the shots.

Dean was not featured in any of the photos, as the star recently revealed that her hubby was away filming the cop drama Lady Dicks in Canada for six months.

Last month, though, Tori was spotted on a family outing without her wedding band, further adding to the rumors.

This past December, the Canadian actor was also left out of the family Christmas card, as he’s now spent several Holidays away from his wife and children.

The celebrity posed with her brood of kids while holding a photo of Dean’s face.

On April 1st Tori pranked her fans by posting a fake pregnancy announcement.

The star cradled her tummy as she captioned her fake post: “No. 6.”

Later, she explained that her news was indeed a joke though a serious matter, writing honestly: “Every week, magazine and press outlets ask if I am pregnant.

“To set the record straight, I am not. The fact is, after my fifth baby, my body didn’t bounce back like it had before. That’s when the constant questions of ‘yet another’ pregnancy first began.

“I feel like I have to constantly defend my body when instead, I should be honoring it for the miracle of life it gave me five times,” she complained.