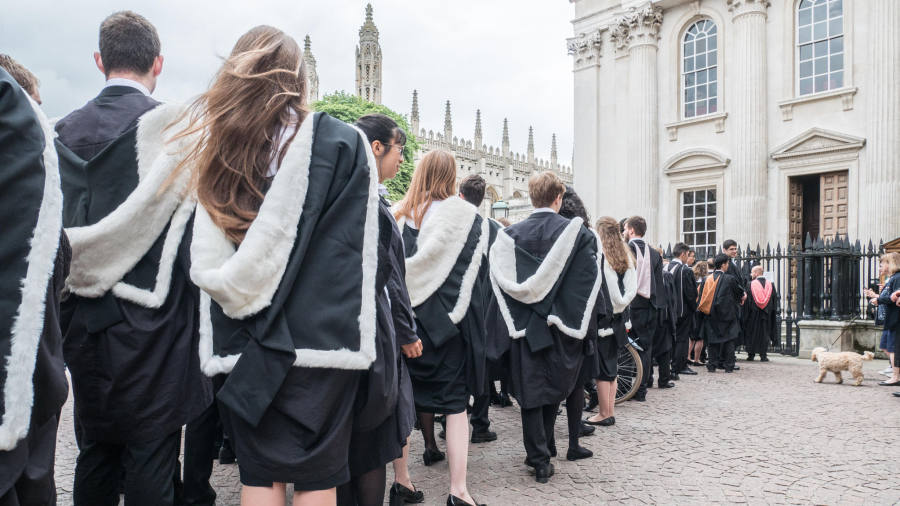 Britain’s leading universities have pledged to halve the gap in access to undergraduate places between the most and least privileged students by 2025 through programmes totalling over £500m a year.

Their efforts come as pressure grows on Oxford, Cambridge and other elite institutions to better tackle inequality and limited social mobility, with young people from the richest areas of England over six times more likely to attend than those from the poorest areas.

“The chance to go to university has been something of a postcode lottery . . . What is an assumed rite of passage for many young people across the country is often viewed very differently in rural and coastal communities, the industrial heartlands and military towns,” Sir Michael Barber, chair of the Office for Students, the higher education regulator, told MPs on Tuesday.

The OFS on Wednesday released an analysis of the “access and participation plans” that universities must submit as a condition of their continued registration, with pledges to cut the ratio of students from the richest compared with the most deprived areas to less than four-to-one by 2025, adding a further 6,500 students from less privileged backgrounds to their rolls.

Among 171 plans filed by late last year, the largest differences between the share of students from more and less disadvantaged areas were at Imperial College London, Oxford, Cambridge, Bristol, the London School of Economics and University College London.

“It is damning for the sector that large gaps still remain between disadvantaged students and their peers. We cannot let this talent be wasted,” said Chris Skidmore, universities minister.

The OFS report highlighted what it said was insufficient emphasis on initiatives to encourage participation by mature students and neglected groups, including the children of members of the armed forces.

The universities jointly pledged to spend £552m on closing these gaps during 2020-21 academic year, rising to £565m in 2024-25, largely through financial support and school-based access programmes for those aged over 16.

They have called for more detailed information from the government to better identify and track the progress of disadvantaged students, such as data on those who receive free school meals, which is not currently shared with admissions officers.

Imogen Farhan, education lead at Reform, a think-tank, said: “The intention behind this pledge is welcome and more active monitoring of universities performance by the regulator will make a difference . . . These plans will not force universities to publish in depth analysis of how widening participation budgets are spent, making detailed evaluation of value for money impossible.”

Universities UK, a membership association which represents the sector, said: “These new targets show an unprecedented level of ambition from English universities as they work towards dramatically reducing equality gaps within five years . . . Universities know that there is more work to be done to ensure that they can reach all groups of students.”

A study released last week by the Education Policy Institute, a think-tank, of initiatives aimed at narrowing inequality in universities, showed only very slow progress towards equality and the limited impact of existing programmes.

James Turner, chief executive of the Sutton Trust, a charity that promotes social mobility, said: “There are still significant regional disparities in who gets into the most selective universities . . . The focus now must be on implementation and on ensuring that these targets are met and real progress is made on a decades-old problem.”

The Conservatives are hollowing the state and consolidating power: democracy is at stake | Andrew Fisher