Top travel destinations based on this year’s hottest movies 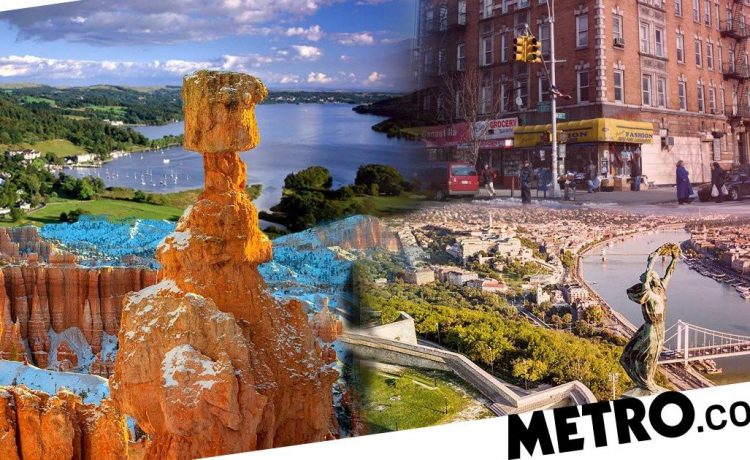 At this point, we’re all so deperate for a holiday that even watching a film can trigger a bit of wanderlust.

And we’re going to feel it even more with all the gorgeous locations set to appear in our (home) cinemas over the next few months.

So, from the Lake District to the Big Apple, get ready for some serious silver screen travel inspo…

The Location: It’s been the city double for everywhere from Berlin to Buenos Aires but this time the Hungarian capital gets its own spot in the limelight as Scarlett Johansson’s Black Widow flies to Budapest for her long-awaited solo Marvel movie.

What to do: Arrive in style à la Natasha Romanoff by taking the train to Budapest-Keleti, the grandiose main station, before heading straight for the city centre to take in the sights.

One of the best ways to see the Paris of the East is by boat so float down the River Danube, taking in the beauty of Buda Castle, Széchenyi Chain Bridge and Hungary’s very own Statue of Liberty.

Then visit Budapest’s Heroes’ Square with its huge statues of legendary Magyar leaders and finish off with a night in the Szimpla Kert, a quirky venue in the ruins of an old warehouse where you can find a host of cool bars.

Black Widow is due out on May 7.

The Location: If you can see it properly through your tears, this touching film about dementia takes place in the beautiful countryside around Keswick and the North Lakes.

What to do: Travel by car or camper van like Stanley Tucci and Colin Firth or take in all that the Lake District has to offer on a hiking tour.

While Lake Windermere is the obvious option, a trip over the rolling hills will take you to National Trust-owned beauty spots Crummock Water and Buttermere, captured in all their autumnal glory in the movie.

Literary buffs might find themselves wandering lonely as a cloud all the way to William Wordsworth’s idyllic Dove Cottage in Grasmere.

You can pick up some local produce and artisanal crafts at Keswick Market (open Thursdays from mid-February to December and Saturdays year round), or make like Supernova’s cast and head to The Sun Inn in Bassenthwaite for lovely pub grub.

Supernova is due out on March 5.

In the Heights: Washington Heights, NYC

The Location: A bustling Latin neighbourhood at the northern tip of Manhattan, which is known for coffee culture, music and vibrancy – brought to the spotlight by In The Heights and Hamilton creator Lin-Manuel Miranda.

What to do: Head to Miranda’s home turf in Washington Heights, which will give you a real taste of the Big Apple.

Once you’ve seen the iconic George Washington Bridge over the Hudson River and strolled around Highbridge Park, check out all the small businesses that serve this vibrant community.

Grab an authentic Cuban sandwich from El Floridita or follow la musica to Pocion Lounge for a tequila-soaked fiesta fuelled by vegan snacks.

Hardcore Hamilton fans will want to pop down the road to see the home of George Washington’s right-hand man, and it’s only a quick ride on the A train to Broadway, where (fingers crossed) the show will reopen on May 31.

In The Heights is due out on July 30.

The Location: Oscar-bait Nomadland, which stars Frances McDormand as nomadic Fern, is a modern western that journeys through Arizona, Nevada, Utah and South Dakota, showing off the American West at its bleak best.

What to do: Get a feel for the nomad life and hire an RV for the road trip of a lifetime. America’s national parks never cease to amaze and Arizona has some of the best sights of them all: the Grand Canyon, Horseshoe Bend and Thor’s Hammer at Bryce Canyon.

Venturing further north across the Great Plains, don’t miss out on South Dakota’s Badlands National Park and the Black Hills. Sacred to the Lakota Sioux people, this area is best known for Mount Rushmore and some incredible striped rock formations.

No road trip here would be complete without a visit to the famous roadside Wall Drug, the sprawling shopping mall where Fern briefly finds work.

Nomadland is due out on March 19.


MORE : What it’s like to travel through Australia’s red centre on The Ghan

READ  Coronavirus UK travel: What is non essential travel? What is classed as essential travel?
Share on FacebookShare on TwitterShare on PinterestShare on Reddit
newsgrooveFebruary 8, 2021