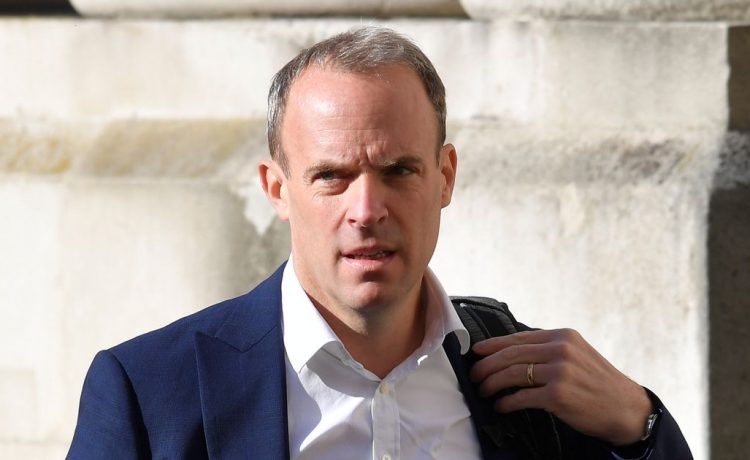 Top Tory Dominic Raab has been slammed after saying the UK should strike trade deals with nations that do not meet European standards on human rights.

In a leaked video call with his staff, the Foreign Secretary argued many important deals would not be reached if the country had to meet the European Convention on Human Rights (ECHR).

Signed in 1950 after the Second World War, the Convention protects against torture and guarantees the right to a fair trial.

Sources pointed out the US would be among the countries Britain could not deal with if the ECHR standard was applied. Some court rulings have also found the UK government in breach of the ECHR.

But Amnesty International UK said the remarks were “shocking” and fitting of a “depressing pattern on human rights from this Government”.

Shadow Foreign Secretary Lisa Nandy added: “It is the latest example of a government entirely devoid of a moral compass and riddled with inconsistency, happy to say one thing in public and another behind closed doors.

“Today the prime minister stood up in parliament and lauded the UK’s commitment to defending human rights around the world.

“This afternoon, the foreign secretary is sending a very clear message to countries engaged in appalling human rights abuses that this government welcomes them with open arms.”

READ  Labour MP Ellie Reeves swears in with her baby

Mr Raab made the comments in a question-and-answer session with FCDO staff.

In the audio handed to HuffPost UK, he said: “I squarely believe we ought to be trading liberally around the world.

“If we restrict it to countries with ECHR-level standards of human rights, we’re not going to do many trade deals with the growth markets of the future.”

However, after HuffPost’s story was published, the Foreign Office issued further quotes from the meeting which the leaker was accused of clipping out from what Mr Raab said.

The Foreign Secretary was said to have run through examples of sanctions and other measures the UK took against countries, adding: “I think that’s the right, targeted way to approach international relations. I think that’s what the grown-ups do.

“We don’t junk whole relationships because we’ve got issues – we have a conversation because we want to change the behaviour. And I think we’re in a much better position to do that if we’re willing to engage.

“But there will be moments, and I can think of behaviour that would cross the line and render a country beyond the pale. But fundamentally I’m a big believer in engaging to try and exert positive influence even if it’s only a moderating influence, and I hope that calibrated approach gives you a sense that it’s not just words – we back it up with action.”

Responding to the leak, an FCDO spokesman said: “We regret that this audio has been deliberately and selectively clipped to distort the Foreign Secretary’s comments.

“As he made crystal clear in his full answer, the UK always stands up for and speaks out on human rights.

“In his full answer, in an internal meeting, he highlighted examples where the UK has applied Magnitsky sanctions and raised issues at the UN regardless of trade interests, and that this was a responsible, targeted and carefully calibrated approach to bilateral relations.”

The comments emerged after Tory MPs urged Boris Johnson not to strike deals with countries suspected of committing genocide.

The Prime Minister defied rebels’ calls last month to sign up to a legal obligation to axe trade deals with any such countries.

And it came as ministers published a major review of post-Brexit foreign policy, which includes plans for a “positive trade and investment relationship” with China.