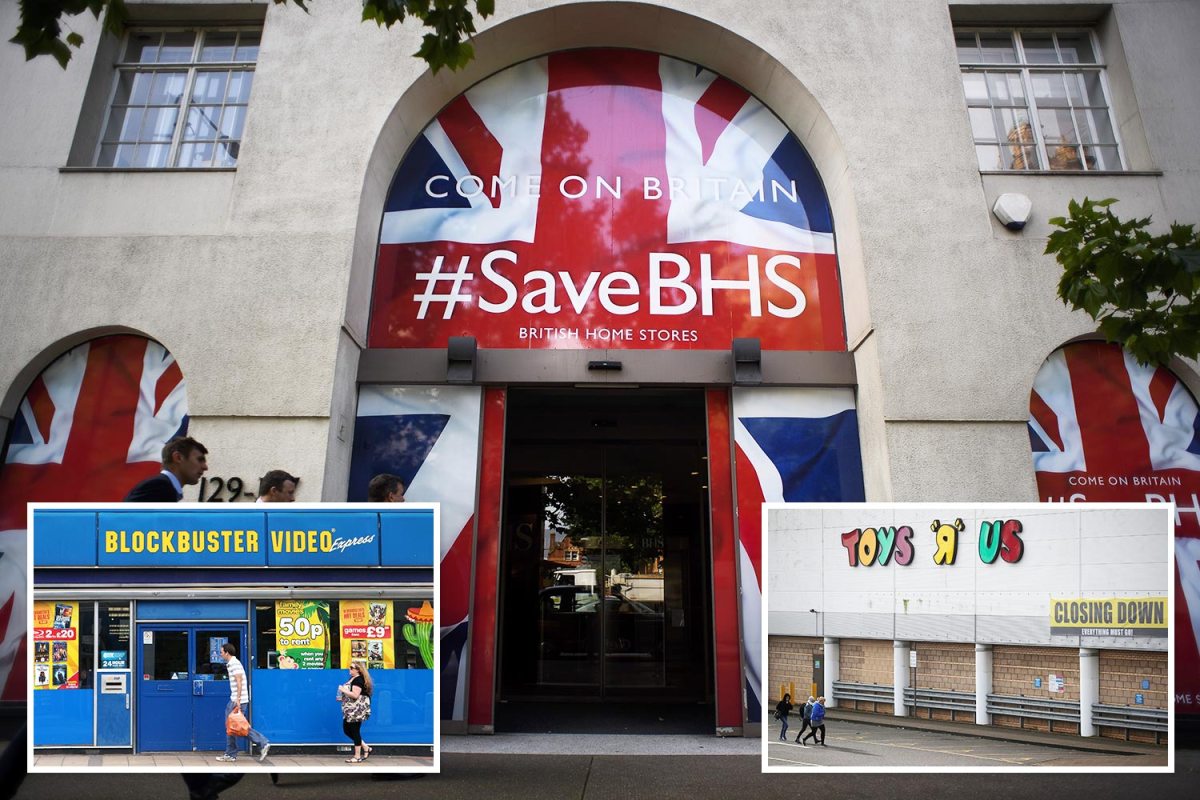 THE British high street has taken a battering this decade.

It feels like every few weeks a new household-name brand is going into administration – so here’s the top ten who ceased to exist this decade.

From BHS to Blockbuster, it feels like our high street is disappearing in front of our eyes.

The rise of online shopping has signalled the death of the high street – and it’s not pretty.

Even though internet bargain-hunting is much worse for the environment, you can’t try anything on and you don’t get that instant gratification of taking your new purchase home with you, the allure of not having to lug a load of shopping bags onto the bus is winning us over.

Here we take a look back at the top ten brands we lost this decade.

The toy colossus had been going for  34 years when it closed its doors in April 2018.

At the time, retail expert Kate Hardcastle said: “It was heartbreaking, because consumers absolutely want to buy the best brand toys for their children.

“Toys R Us had huge unnecessary warehouses and they could have repurposed that for experiences, but they just missed the mark completely.”

It could be because big retailers don’t feel the need to compete. hence what Kate dubs a “second-rate retail experience”.

Borders – a book shop – folded on 2009, with its US branches folding two years later.

The store was a real book worm’s paradise, it offered a coffee shop where you could sit back and enjoy your new read.

The company blamed the closure on a declining book market, with more people  choosing to purchase books from supermarkets and with the kindle busting onto the market in 2007.

Poor old British Home Stores closed its doors for good in 2016, despite months-long efforts to secure a rescue deal and a guerilla campaign to save it.

The high street Goliath had been running for a whopping 88 years by the time they sold their last frock.

The 163 store-strong chain had been overcome with £1.3 billion worth of debt, including £571 million in pension defect.

Before its closure, BHS had been many Brits’ go-to for clothes and home ware – but they lost out on consumers for catering more to an elderly market, critics said.

Bosses had planned to overcome millions of pounds worth of debt by merging with their American cousin, office depot but the scheme fell through.

It’s thought the retailer lost out to competitors with friendlier environments.

Anyone who lived through the nineties of early 2000s will have fond memories of Blockbuster.

The brand surprisingly went bust in 2013 after a long struggle with easily accessible digital movie streaming sites like Netflix.

Across the UK today, the off Blockbuster store still stands as a staunch reminder of a time when you couldn’t view any movie with the click of a button.

Maplin was one of Britain’s biggest electrical shops, established in 1976.

The gadget store boasted 217 locations across the UK and sold everything, from games consoles to secuirty cameras.

But it went under in 2018, having been hit by the slump in the British Pound following the 2016 Brexit referendum.

However, the shop still exists online.

The shop dedicated to neck-accessories went under in 2013.

It was praised for its convenience and thought to exemplify the entrepreneurial spirit of the 1980s.

The shop’s locations in airports and train stations were presumably so high-flying business-types could pop in at any given occasion and don a fancy new tie.

But the brand’s closure was put down to the rise of the online market and a decline younger generation’s enthusiasm for ties.

Poundworld closed down in June 2018, following competition from similar retailers.

Over 5,000 employees lost their jobs.

The close-knit locations of similar stores – offering similar things at exactly the same price – is what led to the brand’s demise.

Barratts, a shoe retailer was founded in Northampton way back in 1903.

The shop was popular with mums and dads, as it offered school shoes at a cheaper price than rival, Clarkes.

But the chain went into administration in 2013, after three previous scares.

However, they still exist online.

Critics say the closure was down to a failure to secure coverage deals with brand  providers as EE and Vodafone pulled out of negotiations to agree fresh contracts.

Despite the memorable ads, critics say they “scared off” customers with their direct selling methods.