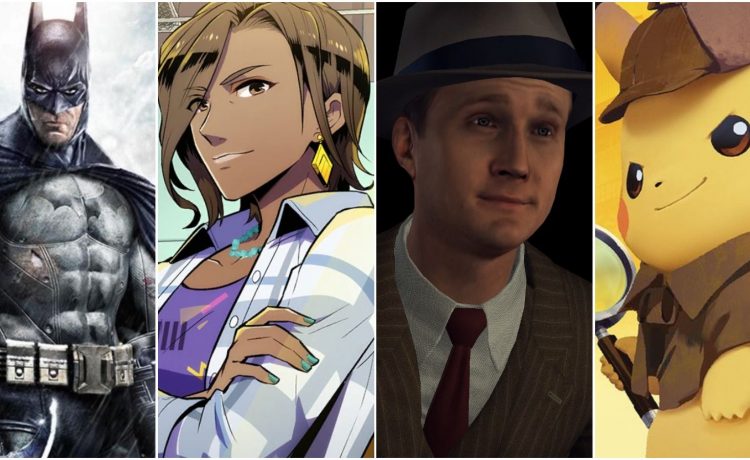 From Batman to Sherlock Holmes, fans of video games have many opportunities to befriend or play as detectives in a virtual world. Some cases may seem small, others feel like the fate of the world rests on the player’s shoulders. The real question is: will fans be fighting crime in a cape or a deerstalker?

Whether the character actually has a badge or is more of a “private investigator” of sorts, these detectives are saving the world and their communities from anything that might come their way. Here are the detectives that fight crime the best – even if they don’t get the credit they deserve.

10 Blacksad (Blacksad: Under The Skin)

Blacksad: Under The Skin wasn’t the best detective game out there, given all the issues that it had upon release. However, the character was so likable and interesting that hopefully, he made players want to check out the comics that he’s based on.

Given that this game is a “choices matter” type of game, players can see many different sides of Blacksad. Maybe he’s cold and to-the-point. Maybe he’s more empathetic and invested in the case. Along with multiple endings to this game, Blacksad feels like a very human character (even though he’s a cat). He can make mistakes, be very emotionally driven, and takes time to connect the dots, but he’s great at getting the job done.

When the concept of a detective version of Pikachu comes to mind, fans might think of the Pikachu that they know and love, with its high-pitched voice and its four-legged run, but maybe this time Pikachu has a detective hat on. Those fans would only be about half right with what was released in the Detective Pikachu game.

It was a bit jarring to hear the voice of a grown man come out of Pikachu’s mouth (even moreso in the movie of the same name), but after getting used to that and Pikachu’s love for coffee, he was still just an alright detective. The human main character, Tim, tends to do most of the work and problem solving, then goes to Pikachu for a second opinion.

Arguably one of the best companions in the whole game, Nick Valentine shines as a dependable and intelligent friend as players travel across the Wasteland in Fallout 4. He’s useful, as he can hack terminals for the player, and he’s very agreeable with nearly everyone that doesn’t automatically distrust him just because he’s a synth.

Players can actually take up cases with him at his detective agency too. It would’ve been nice to have more than just a few detective cases to complete with him, but it’s still cool to see Nick in action as he works hard to solve every case.

The cool thing about playing as Cole Phelps is that players actually get to see him move up the ranks. The cases are quite detailed compared to the ones that some of the other detectives on this list must solve. He also has plenty of obstacles to overcome in his cases, whether its an interrogation or a car chase.

These experiences give players a large range of tasks that shape Cole Phelps. Lots of these tasks depend on the player’s skill though, and Cole isn’t a perfectly likable character either, given events like his affair that got him suspended.

Ronan is a very underrated character in the extremely underrated Murdered: Soul Suspect. After he’s murdered by a killer that he was chasing during a detective case, he learns that he’s a ghost and he can only go to the afterlife once he’s solved his case. He could’ve given up and roamed the world as a ghost like several other ghosts do in this game, but he’s committed to solving this case so nobody else gets hurt and so he can be in the afterlife with his wife.

Ronan has a good sense of humor, a backstory that shows how he’s gotten out of hard times, and players can see his empathy and softness through his harder exterior as the game goes on. Plus he can fight demons and possess people (and cats), so that’s pretty cool.

Even in a game that has a character with “Detective” in his name, Honor shines as the best investigator around in Murder By Numbers. While she started as an actress in a detective show, she eventually becomes friends with a robot named SCOUT, and they become a great crime-fighting, puzzle-solving duo.

RELATED: 10 Puzzle Games You Have To Be A Genius To Complete

Honor shows her skill so often that one of the main characters, Detective Cross, eventually learns that she’s not just an amateur, and he even asks her for help on certain cases. Even when problems come her way, like potential murderers going after her, she keeps a level head and a sense of humor. The only downside is that the player gets the impression that they can make some decisions as Honor, but the game makes it almost impossible to make any wrong calls. The case always gets solved at least.

4 Bigby Wolf (The Wolf Among Us)

Bigby Wolf from The Wolf Among Us consistently shows that he’s a great, well-rounded character, regardless of what choices the player makes for him. Whether players make him more angry and violent or controlled and caring, Bigby always shows that he is committed to getting a case solved.

While it doesn’t show itself too often throughout all the episodes of this game, players also get to see Bigby’s ability to turn into a more wolf-like creature. That seems to be as far as he goes until the final boss fight when he turns into a giant wolf. They don’t call him the “Big Bad Wolf” for nothing.

Batman didn’t gain the title of “The World’s Greatest Detective” for fun. He’s actually incredibly skilled at collecting clues and catching criminals. He even has a “Detective Mode” he can use to see more useful clues so he can solve cases as quickly and as effectively as possible.

Throughout the Batman: Arkham series, Batman can’t really fail any of his cases. Obviously, players can skip over certain side missions in the series, but the quests don’t get labeled as “failed” like they do in games like The Witcher 3. Does that make him any less of a great detective? No, but it might decrease the sense of urgency that comes with these quests when players know they can’t lose.

One of the most well-known detectives ever, fans have a great opportunity to play as Sherlock Holmes in several different video games. Regardless of what game he’s in, Sherlock shows his skills in investigating crime scenes, questioning even the most stone-faced suspects, and making important deductions.

Sherlock is a very human character, as players see in games like Sherlock Holmes: Crimes and Punishments, where mistakes can be made in the player’s deductions. The fate of nearly every potential suspect is in the player’s hands, and Sherlock must work hard to make sure that the right person ends up behind bars.

Among all of these detectives, Nancy Drew has the largest and most impressive track record, with over 30 games under her belt to show her solving over 30 different cases. She’s investigated a wide range of reports, from claims of ghosts to chasing murderers.

The speech features allow players to ask a variety of questions, some that they might just be curious about, and others that are essential for solving the case. The biggest point of urgency in these games sometimes comes from the fact that Nancy can die if the player doesn’t move quickly or makes a mistake in certain areas. Not only is Nancy helping out by protecting people from threats like murderers on the loose, but she also has to hurry to make sure she doesn’t become another victim on a killer’s list. She’s a hero through and through.

NEXT: The 10 Best Telltale Games (According To Metacritic)

Morgan Austin has been writing professionally for about 3 years, creating fiction, non-fiction, and press releases for multiple outlets online. Now a 2019 graduate with a degree in English, she spends much of her time writing her own book, playing video games, and editing work from colleagues when she can. Her freelance writing work for GameRant has given her a chance to combine two of her favorite things, writing and video games, and share them with readers. When she’s not writing or gaming, she can be seen playing with her two dogs or reading fantasy novels.