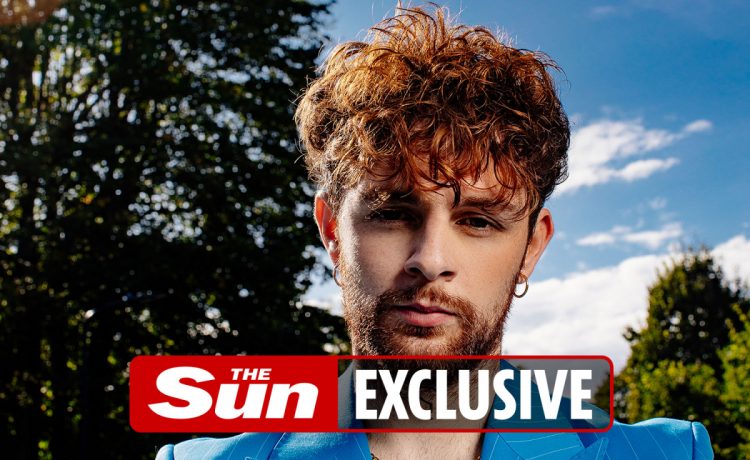 IT might be a grey Monday morning when we chat but Tom Grennan is celebrating.

Let’s Go Home Together, his duet with Ella Henderson, is spending its second week at No1 in The Official Big Top 40 and today he releases his second album, Evering Road.

“I’m seeing five years of hard work pay off and it feels good,” he says chirpily from his London lounge.

When Let’s Go Home Together hit the top spot 12 days ago, his solo track Little Bit Of Love debuted at No2, and is now No5.

“I’ve still got a lot of hard work to do but I’m seeing things happen. I had a No1 and No2 and this week they’re still up there.

“Now the album is coming out so I’m buzzing that people will hear it. It feels like an important record.”

Grennan, 25, has done a lot of growing up since we first met for his 2018 debut album Lighting Matches.

Evering Road is a record “about love, heartbreak and redemption” inspired by a past relationship. But it is not “down in the dumps”.

Grennan says: “It’s about ­realising that I was the toxic one in the relationship. I hold my hands up. I’m sorry and I want to be better.”

As well as maturing in his personal life, Grennan says he has learned so much making this superior second record.

He says: “With my first album, I was thrown in the deep end. I’d never been in a studio before.

“I’d never been on tour or done things for radio. I didn’t know about interviews.

“I’d just written some songs that became an album and thankfully worked — it was me finding my voice.

“I got pulled in and that whole world consumed me a bit. But I’m glad it happened because I wouldn’t be where I am now.”

Evering Road is named after the address in Clapton, East London, he shared with his ex.

“It’s the road we lived on — where I was writing this album as everything was going on.

“I’d started some other songs but I knew I needed to write from the heart about what was going on in my life.”

Grennan was constantly thinking about the album. “I felt like I’d stepped into a real artist’s shoes,” he added.

“I’m a whole different person because of it.”

Make My Mind Up was the first song Grennan wrote for the album.

He says: “I had so many different people telling me what I should and shouldn’t do. There’s a lyric in the song that I feel like there’s a game of tug of war.

“The only person who was going to make my mind up was me. It wasn’t until I wrote that song that I really opened up.”

Evering Road is a more soulful sound from Grennan.

Album closer Love Has Different Ways To Say Goodbye has a similar feel to the heartbreaking Love Is A Losing Game — by Grennan’s idol Amy Winehouse.

“Love Has ­Different Ways is my favourite song on the album,” says Grennan.

“It’s always hard when you have to say goodbye to someone important.

“I have Amy up on my wall in my lounge. I look at her every day. She’s been a massive influence on me.”

He says: “I like that my voice has changed through this record, like, there’s been so much pain and you can hear it in my voice.

“Dan is from Bedford, like me, so we had a connection. He really helped and brought the best out of me.”

Moving back to Bedford to live with his parents in lockdown was also the grounding Grennan needed after his break-up.

“I started getting fit and spent time with my family. I haven’t lived at home since I was 18.

“It was great. I picked up the piano and my dad lifted me for sure. He was on my Instagram a few times and he lifted lots of people up, too.

“I also helped the community by walking neighbours’ dogs and I delivered medicine and helped at food banks.

“A lot of people were struggling at the time and I felt like I should be helping as it’s important to give back.”

Grennan says making Evering Road has also been an education in toxic masculinity and his new video for Little Bit Of Love was inspired by this concept.

He says: “I’m an emotional person but I didn’t like talking about my feelings.

“I’d done some bad things in my relationship and I was hurt but I thought I didn’t want to seem weak but I now realise that’s a load of b*****ks.

“I understood the things that I’d done and to move on I needed to face up to it.

“This record is also about my relationship with myself too. I needed to love myself before I could love anybody else. And, at that time, I didn’t.

“I was battling a lot of different demons, and I’ve got through to the other side.

“If I still carried that guilt then I couldn’t move on.

“But I sorted myself out and stopped drinking — it was like doing a juice cleanse. I was cleansed of all my sins!

“And now I’m the happiest I’ve ever been — in my personal life and with my career. I don’t feel like that stuff’s gonna faze me. I know who I am now.”

Grennan adds: “People categorised me as ‘indie’ with Lighting Matches and I’ve nothing against indie — I love it. But I’m not an indie artist — like a lad band.

“So it’s great to be recognised with my new songs. I’ve put my foot into another world and I love it.”

With an album of 14 quality tracks including songs such as Amen, Make My Mind Up and Little Bit Of Love, Grennan is right to be proud.

“It felt so long since I’d put out an album. And it was good to get the Ella track on there.

“That was her song and she rang me up and asked me to sing on it with her. It’s very tongue-in-cheek and I love it.

“Ella has one of the best ­voices around and she’s a great friend now, too.”

Grennan has also been embracing his unique fashion style and last month was announced as part of Tommy Hilfiger’s Moving Forward Together campaign, which aims to help the fashion industry and creative communities recover from Covid-19.

“It was massive to be a part of it. Clothes-wise I’ve always wanted to be an individual who stands out,” says Grennan, looking smart in a leopard-skin-patterned top and with new blond highlights added to his dark curls.

“I’d love to get into finding special bits of clothing. Maybe I will have my own label one day. I just like wearing clothes that I stand out in.

Grennan has missed playing live and has a 16-date tour booked for September and October, including a gig at London’s Alexandra Palace.

He says: “That’s where my home is — on stage. And that’s where I’m properly me. And I’m buzzing to go out to gigs and see live music.

“I can’t wait to go to a rave and listen to loud music and just feel that energy off people.

“And I think gigs will be OK soon. I’ve been having these rapid (lateral flow) Covid tests for ages now to be able to do TV and shoot music videos. And the vaccines are being rolled out rapidly, which is wicked.

“I feel if these rapid tests are put on a ticket, so you buy a ticket, plus say another fiver for a test then it’s done and dusted after 15 minutes.

I know what my morals are and what I believe and that is to wear a mask, respect people’s distance and ­protect the NHS

How does he feel about artists like Ian Brown who has been vocal about questioning advice around the pandemic.

“I don’t pay attention to it,” says Grennan.

“I know what my morals are and what I believe and that is to wear a mask, respect people’s distance and ­protect the NHS.

“I don’t listen to people on Twitter. That’s their opinion not mine. Mine is to wear a mask.

All Points East 2021: How to get tickets as Jamie XX and Kano announced

Spandau Ballet’s Martin Kemp on feuds, Live Aid & getting the band back together

“There is a light at the end of the tunnel now. We’re about to get out and hopefully back to a bit of normality.

“And it feels extra-special to be putting this album out. It’s an album that changed me and changed my life. I’ve grown up because of it.

“I really hope it gets to number one. If it does I will have a big old cry.”