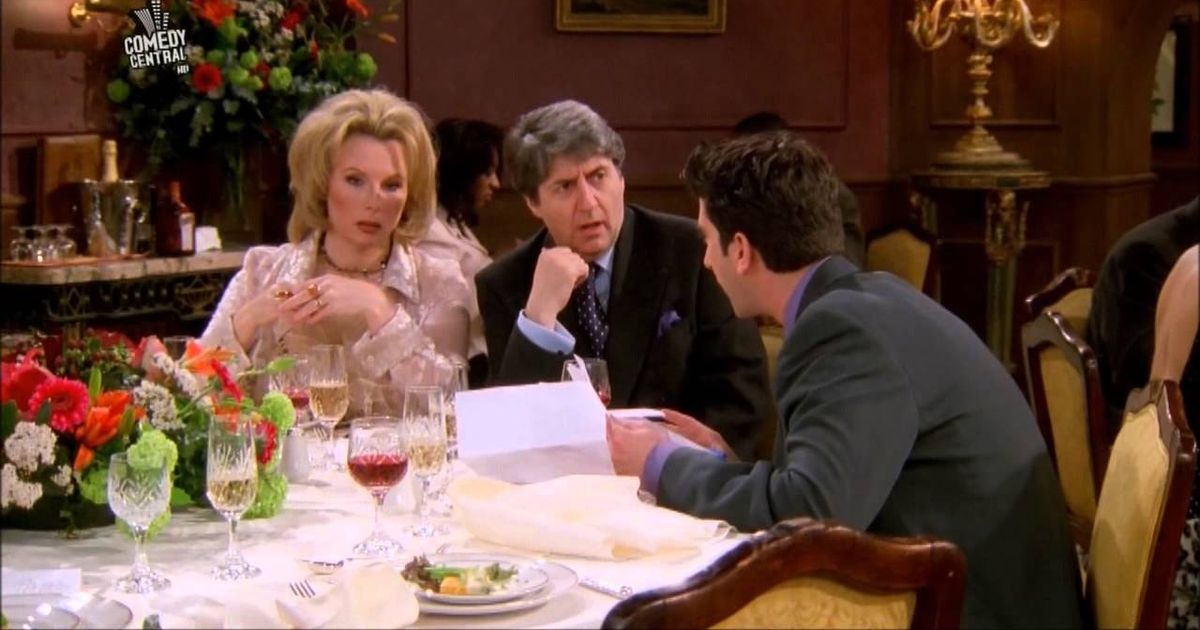 Actor Tom Conti has shot down claims that the six stars of Friends formed a clique and wouldn’t communicate with guest stars.

Tom appeared on the US show – which today celebrates its 25th anniversary – in 1998.

And he says the allegations by fellow guest star Kathleen Turner are wide of the mark.

Turner told an American magazine she felt left out in the cold by the six core actors during filming of her unforgettable performance as Chandler’s sequin-clad transgender father.

She said: “They were such a tight little group that nobody from the outside mattered.”

Conti, 77, appeared in two episodes of the sitcom filmed in London as the dad of Ross’s second wife Emily.

And he says Matt LeBlanc, Courteney Cox, Matthew Perry, Jennifer Aniston and David Schwimmer (Lisa Kudrow filmed her scenes in the US because she was pregnant) couldn’t have been any more friendly towards him and his on-screen wife, played by Jennifer Saunders.

The Shirley Valentine star – the only Scottish actor to appear on Friends – said: “I didn’t know any of the cast before I shot my scenes in 1998. At that stage, they had been on our screens for four years and were among some of the most famous actors in the world.

“They were all extremely nice, very friendly and welcoming. They made it great fun on set.

“What I did find extraordinary was that, even after four years, they were all incredibly fond of each other. That doesn’t often happen among a group of actors, who would usually have hated each other by then.”

The hit show first aired on September 22, 1994, and ran for 10 seasons, becoming one of the most-watched and most-loved shows around the globe.

It has enjoyed a new lease of life since being streamed on Netflix, with new generations of fans becoming hooked. A new book, Still Friends by Saul Austerlit, has also reignited interest in the sitcom, which is centred around the interconnecting lives of six trendy New Yorkers in the 90s.

Tom, who grew up in Ralston, Paisley, says his Friends experience was one of the highlights of his career and is the role his family remain the most excited about. The dad of one, who shot to fame playing Greek lothario Costas opposite Pauline Collins in Shirley Valentine, said: “Everyone was watching it back then and, of course, when I said to the family I had been asked to do some episodes, they all went crazy.

“If I’d said I was going to do a picture with Robert de Niro and Julia Roberts, they wouldn’t have been nearly so excited. They thought it was more exciting than anything else I had ever done.

“I’ve no idea how I got the part. I just got a phone call. They sent a script and, of course, I said yes. I had such regard for all the actors, directors and crew of the show.

“Only someone insane would not have wanted to be part of that.”

Tom, who studied at the RSAMD in Glasgow, and Jennifer were absolutely fabulous as the tipsy and obnoxious parents of Emily, played by Helen Baxendale. They demanded the Gellers pay for their house renovations and a new wine cellar as part of the wedding costs.

Conti, who is dad to ventriloquist and comedian Nina, 45, said: “We filmed in London and on the Warners sound stage in LA. Jennifer made a great screen wife.

“They chose two completely ghastly characters to be Emily’s parents. They were caricatures based on the assumption all posh English couples are largely drunks – I definitely don’t know any of those…

“The wedding episode was a brilliant piece of writing. The whole world was waiting with bated breath to see if Ross would marry Emily.

“There was a sense of relief across the globe when Ross said, ‘I take you, Rachel.’ It was one of the happiest mistakes in TV history. My family pestered me to tell them if the wedding went ahead but I kept them guessing – I didn’t want to spoil the surprise.”

Tom, whose stage and screen credits read like a phone book, may only have appeared in two episodes of the show but one of his lines appears in the list of best Friends quotes of all time.

After a massive row with the Gellers, his character can be heard muttering: “I could kill you with my thumb, you know.”

The grandad of two, who is married to actress Kara Wilson, said: “It was the last shot of the day. There was another line that was in the script and we had finished and then suddenly the producer came up and told me to say the thumb line.

“I thought that was really funny and that’s the one that went in. The writers and directors didn’t stick to the script. They kept making improvements until they got it just right.”

Tom, who was nominated for an Academy Award for Best Actor for 1983 film Reuben, said: “It was such a great phenomenon that it captured everyone’s imagination and continues to do so again.

“Twenty-five years on and my oldest grandson Arthur is watching Friends – he thinks it is wonderful.

“It is such a timeless show and is just as relevant today as it centres around friendships, which folk love to see.”

He added: “My Friends experience didn’t end there. A few years after being on the show, I was trying to get a movie off the ground and I had long chats with Courteney Cox about playing the lead.

“She liked it but her agent wasn’t up for her coming to England to film. That was the extent of my Friends involvement but to have been part of such a historic show was a real honour.”

Tom, who sold his London home to film director Tim Burton for £11million, was last seen on the big screen as an irate judge in blockbuster Paddington 2.

He said: “I was worried kids would hate me forever for putting that lovable bear in jail but thankfully my cantankerous character turns out to be all right in the end and makes amends.”

Tom is no stranger to the courtroom – when he is not working on his new version of Chekhov’s play The Seagull, he can be found helping the Inside Justice group to get innocent people out of jail.

He said: “I discovered them while working on my new novel and was so impressed by the work they are doing that I offered to become a trustee.

“They are an incredible panel of experts – including scientists, barristers, QCs and police officers – who give up their time to help wrongly convicted inmates and their families fight for the truth.”