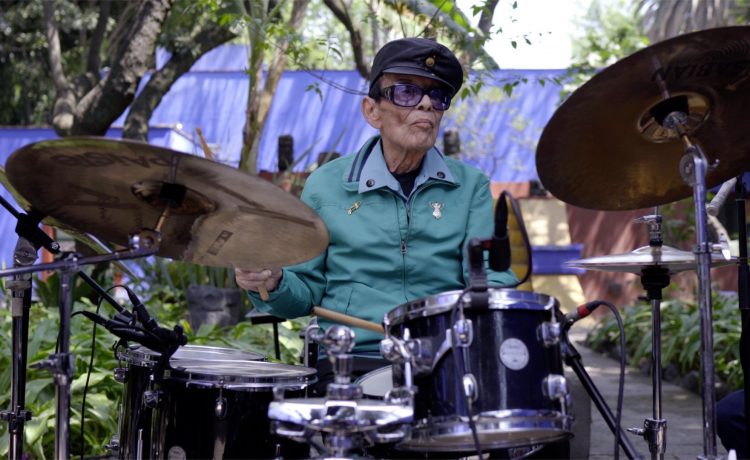 As concert backdrops go, there could hardly be a more intimate, colourful setting for a gig by Mexican percussion maestro Tino Contreras than the beautiful garden of La Casa Azul, the Mexico City home and museum of the late artist Frida Kahlo.

The concert – which is available for streaming this weekend – opens with a mini-tour of the Mexican folk art inside the famous “Blue House”, before panning to the eight musicians in a gorgeous outdoor courtyard that is full of pomegranate trees, prickly pear cacti and pink blossoming bougainvillea. It is a beautiful location for the outpouring of vibrant sounds from Contreras, who celebrated his 97th birthday last Friday.

This one-off 70-minute concert, originally planned for London, is presented by La Linea (The London Latin Music Festival) and is a joyful reminder of why live music is so special.

Contreras, the son of musicians, was a pioneer in promoting Mexican music to the world in the 50s and 60s. He played at the Blue Note club in Paris and toured America, sharing stages with jazz titans Dave Brubeck, Cannonball Adderley, Art Blakey and Duke Ellington.

Contreras, dressed in a turquoise casual jacket, dark glasses and sporting a blue cap, still looks dapper. He directs the band, arranged in a horseshoe shape, with a quiet authority, using small nods of his head and pointed drum sticks. His band-mates are socially distanced, several wearing face masks, a silent reminder of a pandemic that has already killed more than 204,000 Mexicans.

The nonagenarian musician, who was inspired by the rhythmic drumming patterns of the Tarahumara, the indigenous people from his native Chihuahua, has created his own distinctive sound: a Latin jazz blend that includes Mexican folk and pre-Hispanic percussion. His vision flows like a river through these 12 tunes, including the mellow “Malinche” and “Yúmare”.

Delhary Galindo, the sole female musician, plays Mexican rattles, while Carlos Icaza uses the microtonal harp. Luis Calatayud plays a sea shell on the opening track, “Quinto Sol”, before showing off his impressive tenor saxophone skills on “Rarámuri”. Jaime Reyes is full of energy on the electric piano, excelling, along with the drummer’s son, electric bassist Valentino Contreras, on a swinging version of “Máscaras Blues”. “Naboró”, named after a Goddess, is a swirling delight.

At the end of the funky, bluesy “Al Amanecer” – which showcases Emmanuel Laboriel on electric guitar – musical director Contreras reaches across and playfully taps the head of bongo player Eduardo Flores with his drum stick.

“Music is about the feeling… that’s why it’s said that after God comes music,” says Contreras in a brief interview within this uplifting concert. La Casa Azul, once such a source of respite and artistic inspiration, has worked its magic again.

READ  Green Day: 'Rock'n'roll helps you dance through the apocalypse'
Share on FacebookShare on TwitterShare on PinterestShare on Reddit
newsgrooveApril 6, 2021