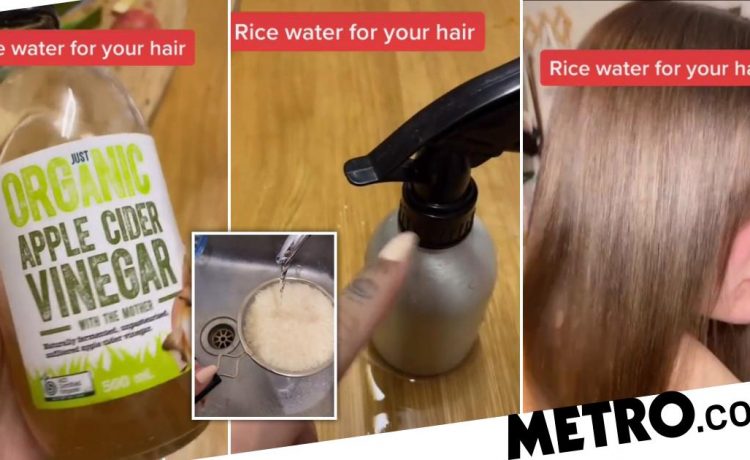 TikTok is always full of helpful hair and beauty hacks but it’s hard to know which ones really work.

And according to one top hairdresser, it really is a good idea.

Bekkii, from Australia, started the video by showing her dry and damaged ends, before showing how she washed some long gran rice in a sieve under a cold tap.

She then put it inside a jar and topped it up with water. She screwed the lid on and shook the jar up to get the starch to leak into the water.

After that, she poured the rice water into spray bottle with a little apple cider vinegar.

Bekkii used the spray after washing and conditioning her hair and then let it dry.

Reacting to the results she said: ‘Oh my god my hair looks so good. It’s so silky and so shiny. I can’t believe it.’

She captioned the video: ‘Shiny hair who? Hahah I would absolutely recommend doing this!!’

The video has been viewed over 280,000 times and lots of people commented on the trick.

One person said: ‘I’ve been doing this for two years now but without ACV (apple cider vinegar). So good right?’

Some advised different techniques, including some who advised doing it before shampooing so that the rice water would be rinsed out. Some also said that it is quite strong and should only be done every few weeks.

He says: ‘The cloudy water left over from soaking rice, is hugely beneficial for hair growth and overall hair health. It is packed full of vitamins and minerals including Vitamin B, C and E, as well as amino acids which all contribute to both strengthening and conditioning of the scalp and hair follicles.

‘Rice water has many different uses and can not only be used just for hair growth but also damage repair, scalp conditioning and to add shine. The amino acid found in the water is ideal for repairing split ends which are caused due to a lack of protein.’

Ozzie recommends using rice water in a couple of ways, which differ slightly from the TikTok video.

‘There are two types of rice water you can easily make at home and use as a hair mask. The first is boiled rice water and the second is fermented rice water,’ he says.

‘The excess boiled water which is left after the rice is cooked can be used instead of a conditioner and is commonly poured over the hair after shampooing. We would recommend leaving for 5-10 mins to really ensure all the nutrients have been fully absorbed and massage well into the scalp before rinsing.

‘Doing this once to twice a week over a month, should show some improvement to your overall hair health.

‘Fermented rice water is one that has been left to ferment for up to 48 hours and is to be diluted before using on the hair. Fermentation helps to lower the pH level of rice water and enhances the vitamins and nutrients level in the water, which nourishes the hair cuticles and promotes hair growth.

‘Fermented rice water is acidic, and when you rinse your hair with it, it restores the pH level of your hair. Simply use the same way as boiled rice water but leave on for a longer period of time (15-20mins).’

Jack Ball from Ozzie Rizzo salon London adds: ‘It helps to fill in any gaps in the hair cuticle, which can be caused by damage either from heated tools or over colouring.

‘The rice water helps to fill in the thinning cuticle which makes hair fuller and thicker allowing light to reflect creating an amazing shine and smooth surface.’


MORE : How to cope with dandruff if you have Afro hair – and what products to buy

READ  Tamal Ray’s recipe for date traybake with toffee | The Sweet Spot
Share on FacebookShare on TwitterShare on PinterestShare on Reddit
newsgrooveNovember 24, 2020