THOUSANDS of mums-to-be are being given antibiotics that put their baby at increased risk of birth defects, medics warn.

Experts say macrolides, which are commonly prescribed for chest or urine infections, must be used “with caution” during pregnancy.

Doctors often offer them as an alternative to penicillin, which is known to be safe, if they fear the patient may be allergic.

The British Medical Journal study found taking macrolides in the first trimester increased a child’s risk of being born with a major defect by 55 per cent, compared to penicillin.

And use in early pregnancy was linked with a 62 per cent raised chance of a tot having heart problems.

Babies born to women who took the drug at any point while expectant were also 58 per cent more likely to have malformed genitals.

Lead researcher Heng Fan said: “Macrolide antibiotics are used to treat a wide variety of bacterial infections, and are among the most frequently prescribed antibiotics during pregnancy in Western countries.

“If the associations are shown to be causal, these findings suggest that an additional four children would be born with cardiovascular malformations for every 1,000 children exposed to macrolides instead of penicillins in the first trimester of pregnancy.”

Around 30 per cent of all women are prescribed antibiotics in pregnancy – with ten per cent of these given macrolides.

Fellow researcher Professor Ruth Gilbert said: “Our findings suggest it would be better to avoid macrolides during pregnancy if alternative antibiotics can be used.”

Dad stuck with permanent erection after op when 1.5 tons of glass fell on lap

What is coronavirus, what are the symptoms and how does it spread?

Commenting on the findings, Andrew Shennan, Professor of Obstetrics at King’s College London, said: “These specific defects suggest the antibiotic caused the problem directly, rather than it being related to the illness that the antibiotic was prescribed for.

“The abnormalities were greater than in women who received penicillin, which is safe in pregnancy.

“However, defects were still rare, and as these antibiotics may still be necessary to prevent serious infections, they should only be avoided if there are suitable alternatives.”

Coronavirus: Sue Martin describes the trauma of husband being in an ICU 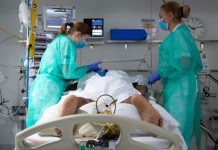