Activists called for a swathe of reforms from the government, including an end to the proposed Police, Crime, Sentencing and Courts Bill 2021, which sparked previous protests earlier this year 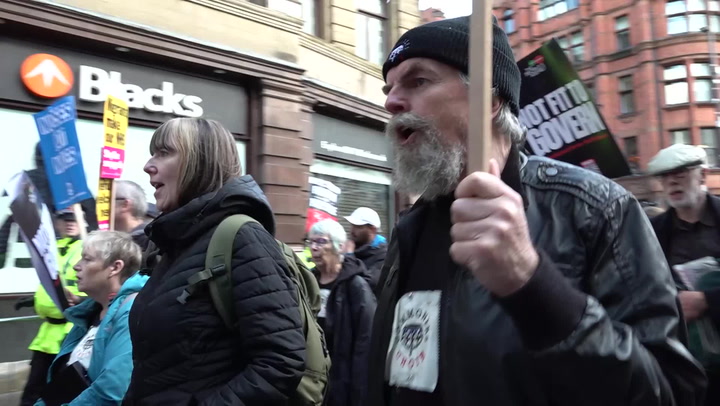 This year’s conference returns as a hybrid of in-person and online events after last year it was changed to a virtual event due to the coronavirus pandemic.

Drummers played as the People’s Assembly march began at Whitworth Park and made its way through the city before finishing at the Manchester Central convention centre.

A banner read “against the Tories” while other placards read “not fit to govern” and “cut war not welfare”.

Photos showed crowds filling the streets, holding up the hand-made signs and chanting.

Many dressed in attention-grabbing outfits for the demonstrations.

Activists called for a swathe of reforms from the government, including an end to the proposed Police, Crime, Sentencing and Courts Bill 2021, which sparked previous protests earlier this year.

Sunday’s march is the centrepiece of the group’s demonstrations, which began yesterday in St Peter’s Square, and will continue until Tuesday.

Greater Manchester Police have formed a ‘ring of steel’ around the convention centre, which is hosting the conference.

Crowds filled the streets for the demonstrations
(

The march means several buses are being diverted and road closures will be in place over the course of the afternoon, although Metrolink trams are not affected.

Passengers are being encouraged to plan their journey by checking Transport for Greater Manchester’s website and social media channels for updates.

Commons Leader Jacob Rees-Mogg has fired a fresh warning at Boris Johnson not to hike taxes any further, telling the Prime Minister taxation has hit “the limit”.

Drummers played amid the protest
(

Mr Rees-Mogg told an event at the fringes of the Conservative Party conference in Manchester that the Tories must ensure the state spends taxpayers’ money effectively and that the tax burden is “reasonable”.

“We are at the upper reaches of the reasonableness of the tax burden,” he said.

“I think we are about at the limit of what taxation can raise.”

A banner reading ‘against the tories’
(

Asked if that was an argument for lower taxes, he responded: “That’s a very strong argument but it’s all about balance.”

International Trade Secretary Anne-Marie Trevelyan has said that “capitalism, commerce, free and fair trade” are the “real rebellion against extinction”.

Ms Trevelyan told the Conservative Party conference that capitalism and free trade have a “far higher potential to raise people’s quality of life than protectionism ever will”.

“As the Prime Minister said in his Greenwich speech last year, in 1990 37% of the world’s population were in absolute poverty – that is now down to less than 10%,” she said.

One placard reads ‘not fit to govern’
(

The minister added: “Capitalism, commerce, free and fair trade. In our past, nothing else has matched their potential to increase opportunity. In the history of our planet, they are the real rebellion against extinction.”

Ms Trevelyan said that the Government had secured trade deals “worth £744 billion” between the “UK and partners around the world” in the last five years, with 68 countries and also with the EU.

She also said the UK had “so much to offer the world”, including net zero industries and the “Prime Minister’s shipbuilding renaissance”.

I rejoiced in Blair’s triumph in ’97. Will I ever get the chance to cheer again? | Will Hutton